Phil Hall, Toward a Blacker Ardour

these two grown out    but silent    banjo nails

looking at one hand    writing with the other

No work ‘til    maybe spring 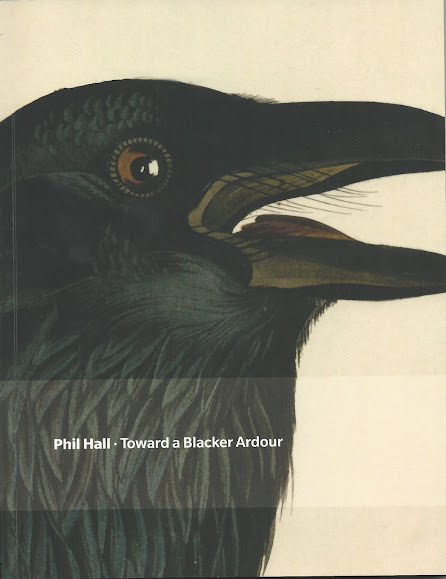 Perth, Ontario poet and editor Phil Hall’s latest full-length collection is Toward a Blacker Ardour (Toronto ON: Beautiful Outlaw, 2021), published by friend, collaborator and designer of a number of Hall’s Book*hug titles, poet and critic Mark Goldstein. Toward a Blacker Ardour is one of three full-length titles that Beautiful Outlaw has just released (alongside a translation and a collection of essays, both by Goldstein himself) which shifts Beautiful Outlaw’s long running enterprise of publishing very occasional chapbooks into something just a bit bigger. Over the years, Hall’s poetics and poetry collections have evolved from individual poems collected into books to individual book-length projects constructed out of poems to where his work currently lives: a kind of continuous, evolving through-line exploring a collaged sketch-work of ideas on writing, biography and personal history, trauma, reading and thinking, utilizing poem-fragments as building blocks that accumulate into further extensions of an ever-expanding poetic. One can see the through line meandering across multiple of his collections, moving back in time from the current back to his award-winning Killdeer (Toronto ON: Book*hug, 2011) [see my review of such here], through NIAGARA & GOVERNMENT (St. John’s, Newfoundland: Pedlar Press, 2020) [see my review of such here], Conjugation (Book*hug, 2016) [see my review of such here], My Banjo & Tiny Drawings (Toronto ON: Flat Singles Press, 2015) [see my review of such here], his “selected poem,” Guthrie Clothing (WLU Press, 2015), Notes from Gethsemani (Vancouver BC: Nomados, 2014) [see my review of such here] and The Small Nouns Crying Faith (Book*hug, 2013) [see my review of such here]. One could say that the evolution into and towards his current work fits within the trajectory of his published work, pre-Killdeer, but that particular collection—winner of both the Governor General’s Award for Poetry and the Trillium Award, as well as shortlisted for the Griffin Poetry Prize—does seem to exist as a kind of pivot between his work up to that point, and his work since [prior to that collection, do you remember when I pointed out the killdeer as Hall’s “token bird”?].

There is an increased density to his work with each succeeding collection, one that also allows his attention to the moment, minutae and intricacies of language and experience to linger. He lingers, there. He lingers, as much as he might carve away through revision, a suggestion he has referenced multiple times, pulling his language back towards a “silence” he never manages to achieve (or can’t possibly avoid). Each thought, through his lyric, turned and turned over, so as to catch a different side of it, possibly; a different angle of light. Structurally, there is something of the accumulation of short stanzas of dense lines and couplets, alternating slight indentation, that Hall has latched onto as his best thinking form, and this, in many ways, allows for a sense of ongoingness between his published collections. One poem, one might say, to paraphrase Charles Olson’s “Projective Verse,” must immediately and directly lead to a further poem; each book, as well, leading directly to the next.

Above the horizon    tree design
this spring’s    cursiveface

Christopher Dewdney’s spelling of    their

According to the notes at the back of the collection, the bulk of Toward a Blacker Ardour was composed while he was Writer-in-Residence at the University of New Brunswick in Fredericton, “during the fall & winter 2018-2019 during which much of this was revised & balanced.” The book is structured as a decalogue of poem-sequences, strung as along a clothesline in a cool breeze: “AnyWord,” “Italics,” “Territories,” “Grim,” “Varve,” “Landline,” “Concatenations,” “Nature,” “Calendar 2017” and “Addendum.” “I build this now,” he writes, as part of the opening sequence, “from my stupid journals [.]” Toward a Blacker Ardour utilizes Hall’s ongoing concerns, attentions and readings as an exploration on form itself: writing so that he may better understand the mechanics of writing, and the possibilities of what that writing, and the furthering of his silence, might just shake loose. “The reluctant retreat / towards silence,” he writes, as part of “Calendar 2017,” “in each revision // unproven    unimproving // shakes forth    improv [.]” There is something of the self-isolating monk in Hall’s lines, how his narrator-self presents throughout—“I am making    small adjustments    to the forme // forme refers to    anything you have looked up    in the chase” (“Italics”)—an idea not entirely foreign when you consider that his small collection Notes from Gethsemani originated from time he spent at the Abbey of Gethsemani in Kentucky in 2012, or even the fact of his multiple Writer-in-Residence positions at a variety of Canadian universities over the years. The late John Thompson, a poet Hall has referenced previously, might have begun the ongoingness of his own infamous lyric, Stilt Jack (Toronto ON: House of Anansi Press, 1976) with “Now you have burned your books: you’ll go / with nothing but your blind, stupefied heart,” but Hall assembles the loose, scattered fragments of his life and his enthusiasms in an isolation that depends upon his reading, his memories, his family, his friends, his books and his interactions with the world, which in the end, isn’t really isolation at all.