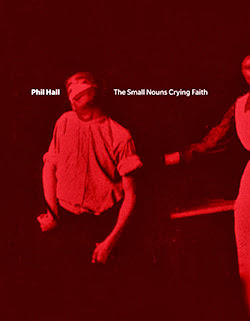 Through nearly a dozen trade poetry collections, Perth, Ontario poet Phil Hall’s poems have the durability and devastation of koans, and the envy of poets who encounter them. Much like the books that preceded it, his eleventh trade poetry collection, The Small Nouns Crying Faith (Toronto ON: BookThug, 2013), is deeply immersed in the world and history, yet contained by neither. The Small Nouns Crying Faith borrows its title from the poem “Psalm” by George Oppen, himself known as a “poet of attentiveness,” a quality easily attributed to the more than three decades of Hall’s work. Oppen’s small poem, originally published as part of the collection This in Which (1965), opens with “In the small beauty of the forest / The wild deer bedding down— / That they are there!” with the fifth and final stanza, that reads: “The small nouns / Crying faith / In this in which the wild deer / Startle, and stare out.” Reading Oppen and Hall side by side, the comparisons run deep—Hall composes poems from his Ontario landscape, shades of his darker past, notes on his literary forebears (whom he refers to as his “heroes”), numerous artifacts, and could just as easily reference, at any point, the importance of pausing to listen for deer.

Our expedition followed her cold-tea stare

was recorded as her only expletive

little brown saw-marks in the corners of the stiff ceremonies

Phil Hall has long been a poet of deep attention, compiling and collecting into an accumulation of poems that speak of artifacts and smallness, and a humanity rarely lived and articulated so well in Canadian poetry. This is his first trade collection since he won the Governor General’s Award for Poetry and the Trillium Award, aswell as being shortlisted for the Griffin Prize, for Kildeer (Toronto ON: BookThug, 2011), a collection of self-described “essay-poems,” published as part of BookThug’s “Department of Critical Thought.” Hall’s latest collection of what have evolved into “essay-poems” continue to practice a folk-local, examining the small, local and deeply specific, composing striking lines and phrases that accumulate into individual pieces, as well as sections of a far-broader canvas. Somehow, his lines manage to self-contain in such a way that even a shift in the order might still make the entire collection no less capable, breathtaking and wise. As he writes in the poem “Plum Hollow”: “The failure of order is the work / disorder is not the work.” The collection also includes a small pamphlet-as-insert, “Faith,” a poem-sequence composed up of words and phrases plucked from the book as a whole, selected and rearranged to reveal both something new, and something about the entire project.

I would celebrate every detail

now I have changed my thinking on that

wild yet   this inextricable quickening

During the Ottawa book launch of The Small Nouns Crying Faith on June 2, 2013 as part of the AB Series, Hall suggested thatbeing left-handed, it was easier for him to read from the collection from back to front. There is such a great comfort to the work in The Small Nouns Crying Faith, one that knows the important answers might only emerge from important questions, and the level of self-awareness and self-questioning is remarkably rare and deep. If a pen falls in a forest, might anybody hear?

They hate me in that province to this day

& didn’t pick the friend-to-all who was dying

but the tracings of a social pact    almost accidental
always incidental

A version of the second of the book’s five sections, “A Rural Pen,”appeared as a limited-edition chapbook with Cameron Anstee’s Apt 9 Press in 2013, a series of (as the author self-described in his acknowledgements) “hacked scrawls,” lifting its title from William Blake to write short and quick meditations with fireworks-momentum. What is continually astounding about Hall’s writing, via his last few poetry collections, is in the series of shifts, whether gradual or sudden, that bolt through the poems. Move your way backwards through his work to the award-winning Killdeer (Toronto ON: BookThug, 2011), to TheLittle Seamstress (Toronto ON: Pedlar Press, 2010) to White Porcupine (Toronto ON: BookThug, 2007) and everything that came previous, and you will begin to understand the differences in tone, mood and question. Urban explorations and a dark rural history have shifted entirely to an ease and sense of peace in a country setting, sketching poems and fences and birds. His recent collections have continued his interest in exploring and questioning through collaged-fragments of turned and twisted phrases, composed as poem-essays, but more recently the poems have shifted into poem-essays that explore the purpose, means and goals of the writing itself. Precision is an essential quality to Hall’s poetry, even as it discusses the impossibilities of such precision. The poems question, respond, reiterate and shift, as the hand that scrapes the rural pen moves throughout the world, working to ask exactly what the meaning precisely means, and if that is even possible.

It can’t be October

riven by passion, not profit. We contin
(“Claver”)

Hall’s isn’t a poetry carved into perfect diamond form, but a poetry whittled from scores of found material to be arranged, pulled apart and rearranged. The poems are important for what they know, what they ask and reveal, and they might tell you, if you know to listen.