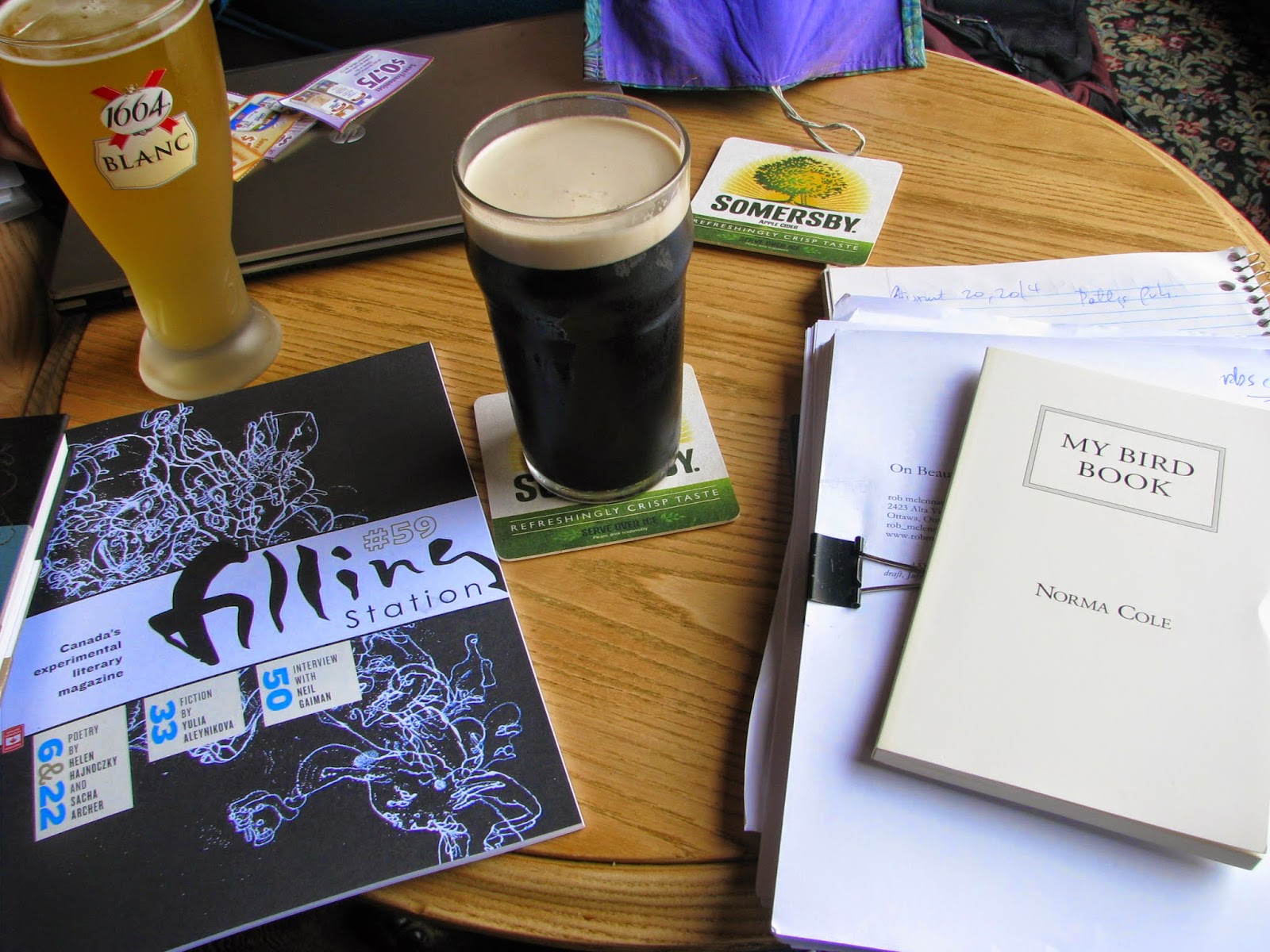 Summer turns to fall, and we start thinking about fall events, including the ottawa small press book fair, which turns TWENTY YEARS OLD with our event on November 8. How can twenty years have already passed? Madness. And of course, watch for my double book launch on September 25th at RailRoad, as well as the launch of the three fall Chaudiere Books titles (by Roland Prevost, Amanda Earl and Monty Reid) in October at the Ottawa International Writers Festival!

And Christine returns to work the same week as the small press fair, which means I’m home with baby Rose full-time. Will there be less of me here? Only time, I suppose, will know for sure.

Keep your eyes on the Chaudiere Books Indiegogo! It ends mid-month, and there are still plenty of amazing perks that have yet to be picked up. Christine McNair’s bookbinding workshop? An entire run of the long poem magazine STANZAS? The John Newlove documentary? And books, books, books…

Austin TX: I’m intrigued by the compact poems in Sarah Campbell’s new title, we used to be generals (Austin TX: further other book works, 2014). The author of Everything We Could Ask For (Little Red Leaves Press, 2010), the former Buffalo resident and editor/founder of P-QUEUE has collected some fifty short, sharp poems that turn and defy expectation, providing meditative twists and cognitive twirls.

WHEN WE WERE CHILDREN

Enough was never enough
Hours, barbaric and blooming
The hole of it
All that waiting around

There is the loveliest sense of smallness to these poems, carved pieces of wood and glass that Campbell has crafted over a long period, some composed with a remarkable smoothness, and others, with a deliberate rough quality. Some even have a flavour of the surreal to them, breaking any sense of expectation, turning the poem slightly on its side.

THE GREATEST OF ALL GREAT

Mt. Pleasant ON: poet and publisher Kemeny Babineau’s new offering is the chapbook A Poem of Days (2014). Produced as “A cycle of journal entries” from January 7, 2013 to January 15, 2014, and subtitled “(for Nelson and you” (with the Nelson referred to as poet and bookseller Nelson Ball), Babineau sketches out a series of short journal poem/entries that accumulate into the small space of a year, writing out his own version of the poetic “day book” done in the past by such as Gil McElroy, Robert Creeley and others.

the social value in this

The poems are short, self-contained and sharp, yet each seem to lean into each other in sequence, suggesting the sketches were constructed very much as a loosely-formed suite. One day follows another, and the moments Babineau chooses to highlight are very much influenced by Ball’s own work, as Babineau moves through single points, the significant pause, and an engagement with nature.

Then sun, a clean