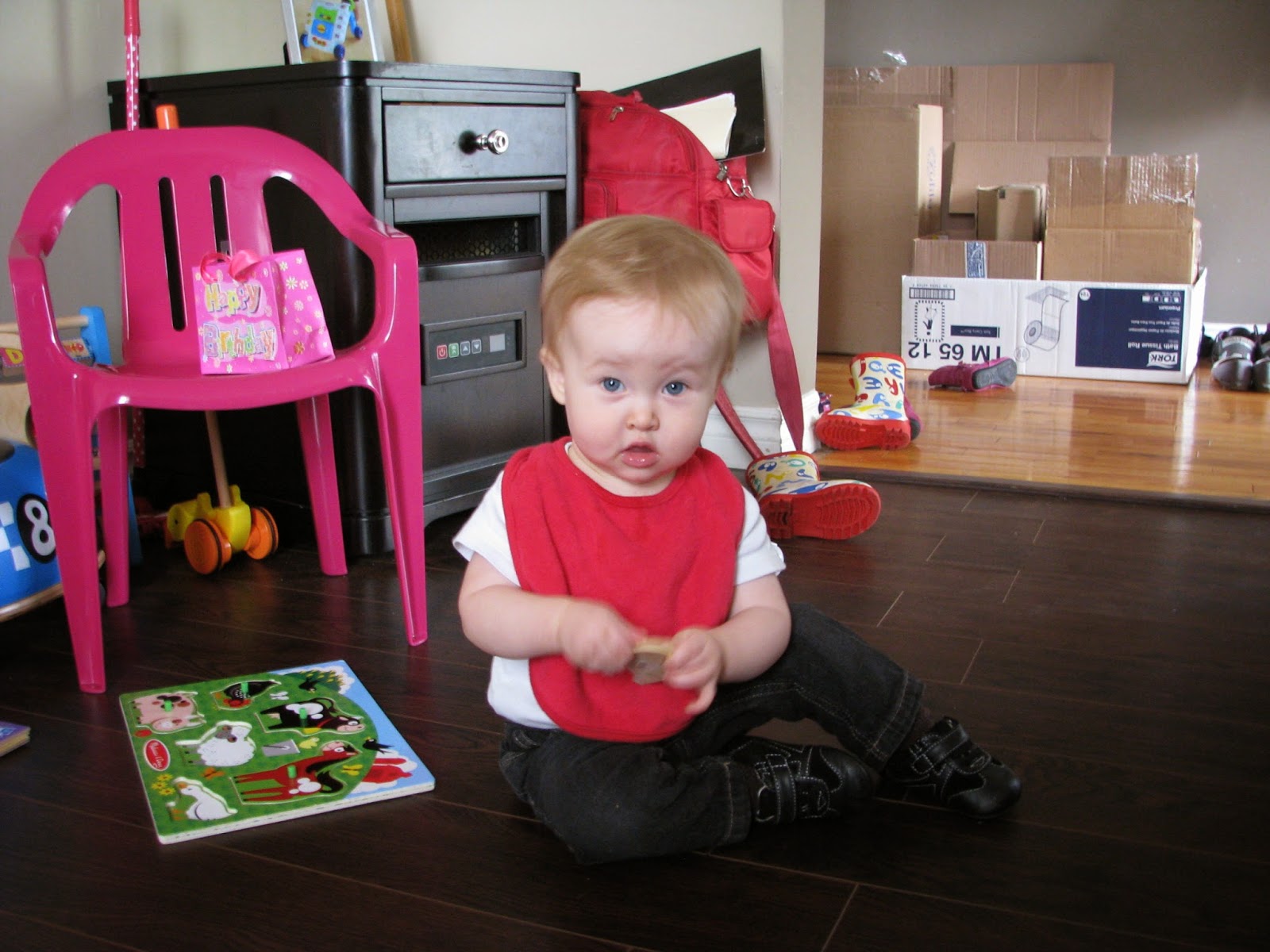 Our big trip, part two (see part one here). As Christine informs, over a period of eleven days we drove some 3765.47 kilometres. A drive of 41 hrs and 45 minutes. With a ten-month old. Madness.

Part of our trip thrived on the level of accident, seeing what we might see as we went, and allowing ourselves the time to explore. Our schedule of travel really focused on the people we were visiting, with the remainder at sites we might never have even seen had we bothered making too many plans.

Tuesday, September 16, 2014: Leaving Saint John (after a morning of wandering), we landed in Moncton, New Brunswick to spend some time with an old school friend of Christine's. Rose was initially less taken with Jeanette's toddler Beatrice than with Beatrice's toys [above], but that was eventually settled. They circled each other, curiously. 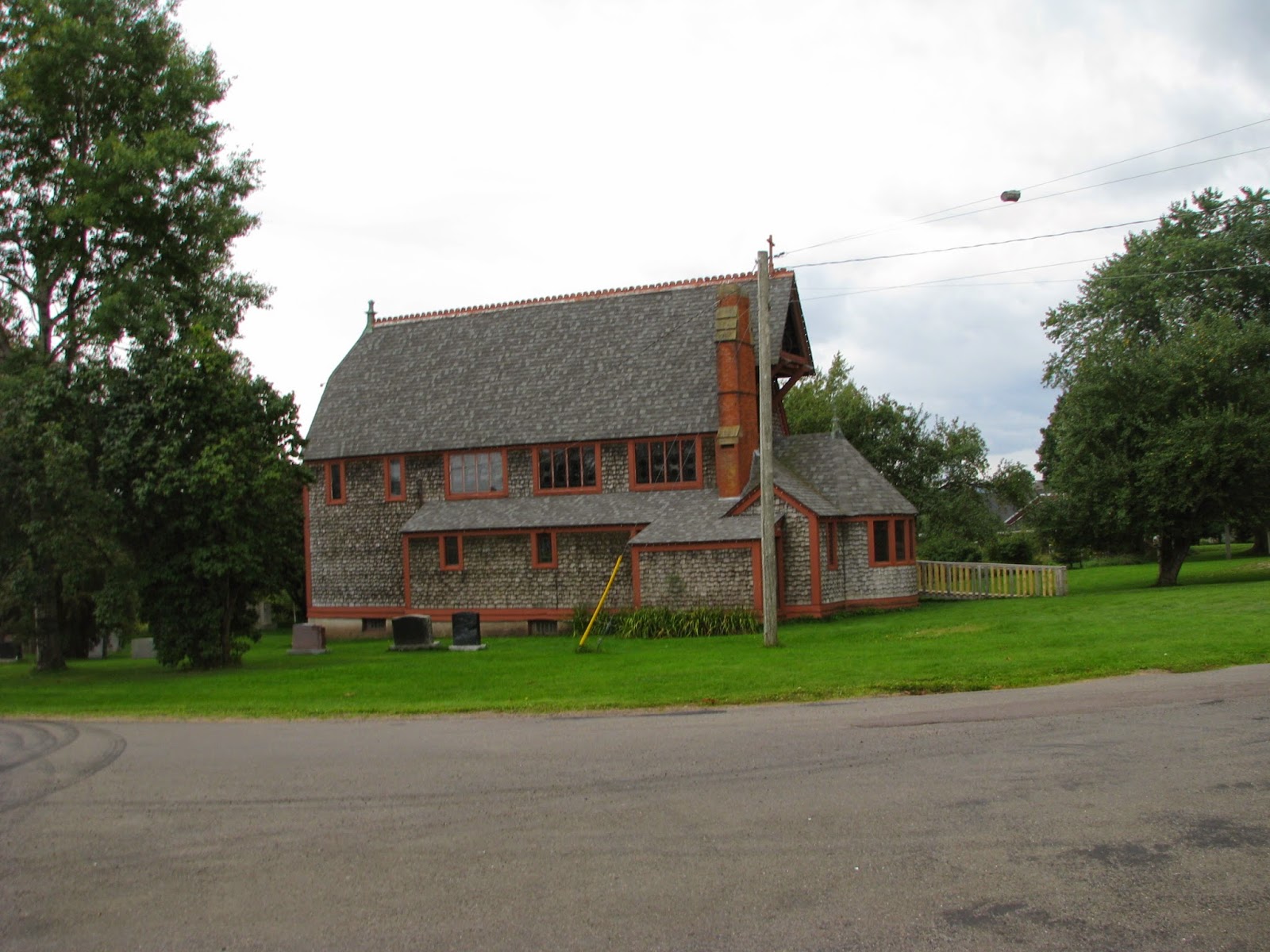 After lunch, we had just enough time to make it to Hillsborough, to catch the Hon. William Henry Steeves House and Museum before it closed at 5pm. Hon. Steeves (1814 - 1873) was one of the Fathers of Confederation, a couple of generations after the Stieffs family arrived and changed their name to Steeves (an array of Pennsylvania Dutch families arrived to thrive in the area after the expulsion of the Acadians, a number of whom Englicized their names). This makes everyone related to a Steeves a descendant of this family, including Christine, as well as Gaspereau Press editor/publisher Andrew Steeves. The list of other notable descendants is impressive, and includes Jack Layton, as well as some thousands of others.

We were quite a while in the house, as Christine sat in the back adding our information to theirs at Ancestry.ca. Given the amount of family they're attempting to track, its quite a daunting project, but Christine's (and thusly, Rose's) lineage is now included. As Christine was involved in such, Rose and I were given a tour of the family church [pictured, above], which is still in use. An oddly-shaped building, it is really quite lovely. The inside is designed as a ship, and to look up to the ceiling is to see the upside-down outline of a sea-worthy hull. 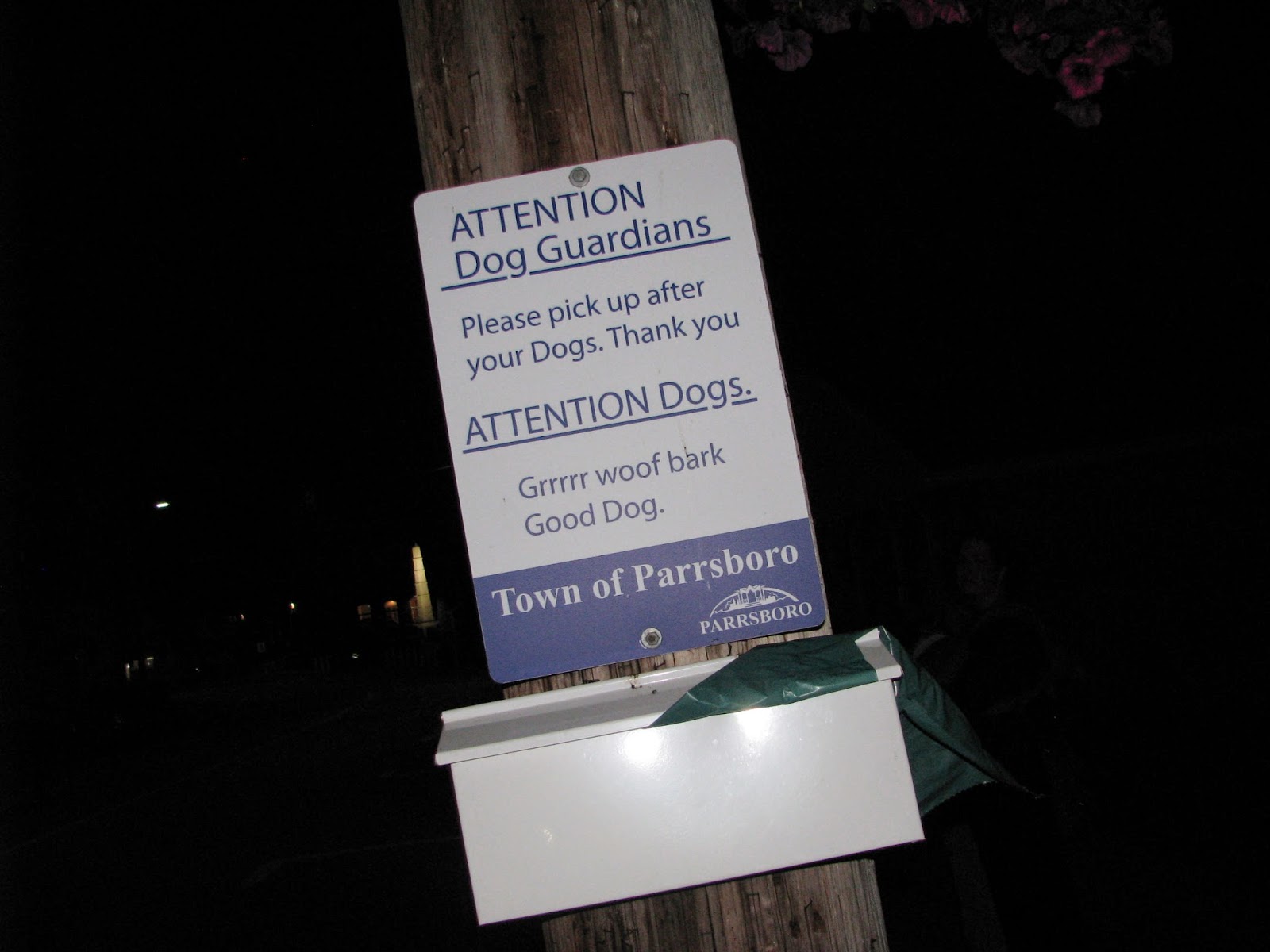 We were there far longer than we had hoped, and were very taken with the generosity of the couple running the place.

Upon leaving, we made for a small bed-and-breakfast in the Village of Parrsboro, and took a walk to see the water, and other sights, before retiring. 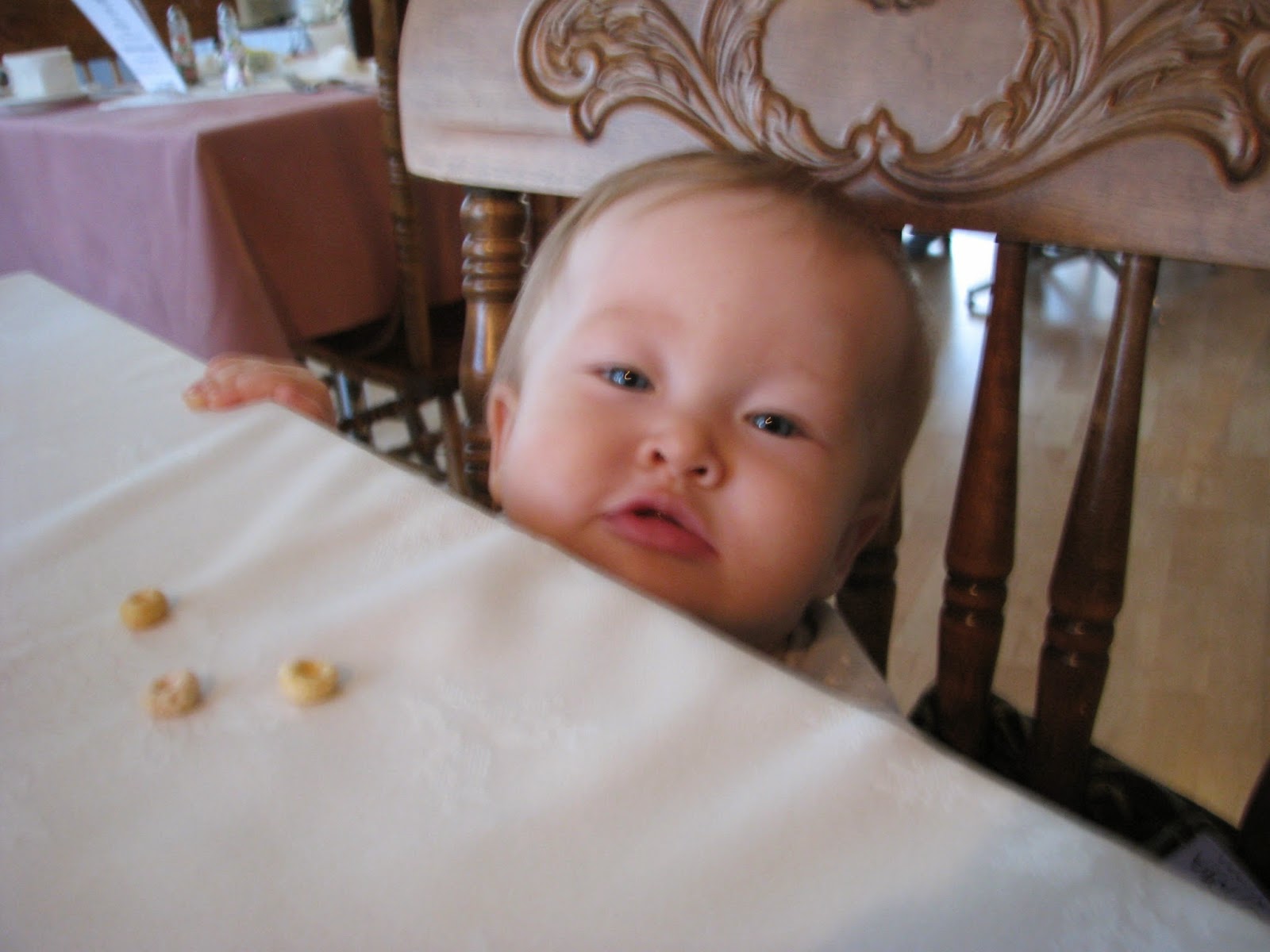 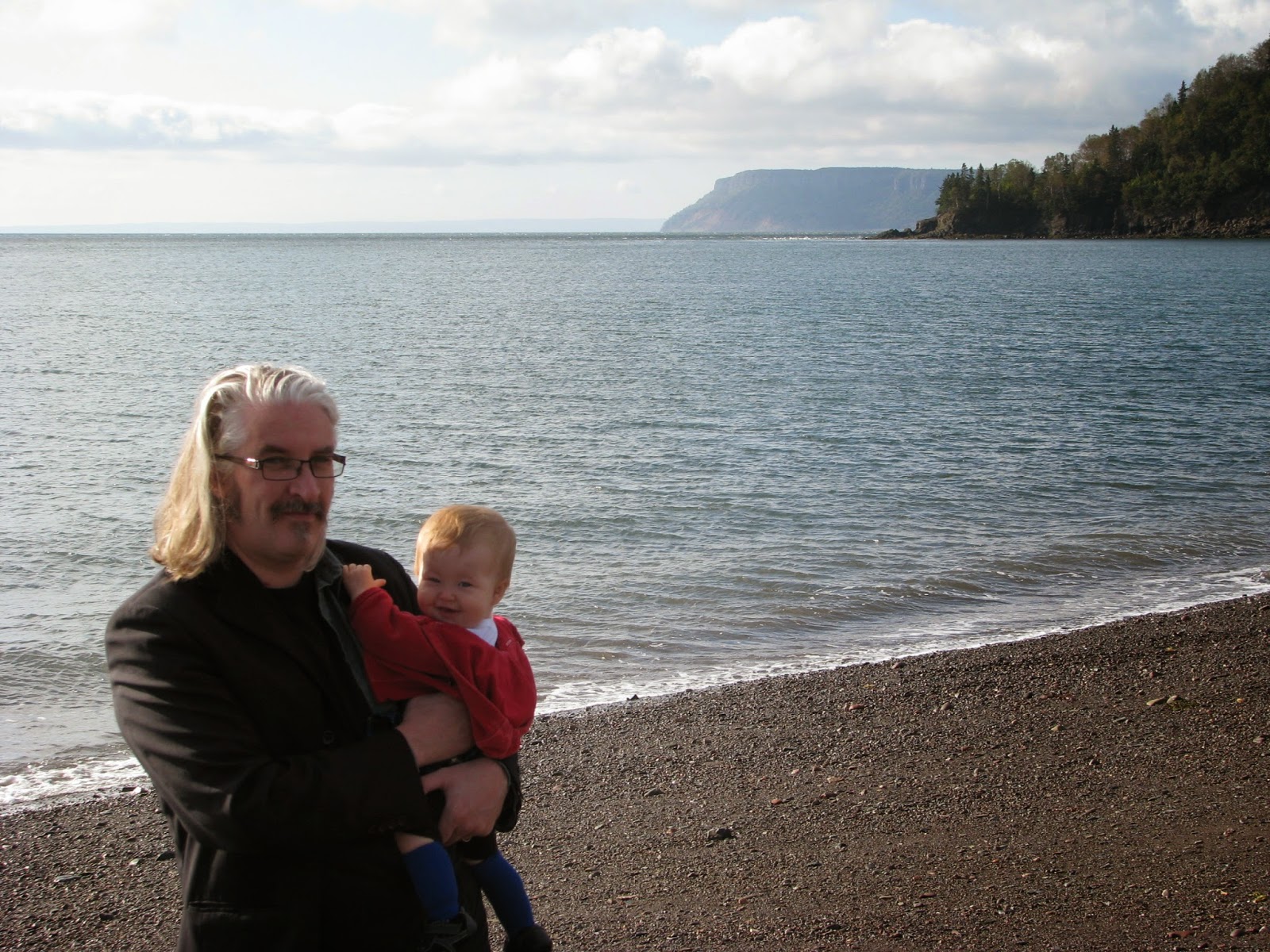 Wednesday, September 17, 2014: I was slightly annoyed that the b+b (as much as we enjoyed such) didn't include a highchair or booster seat in their little breakfast nook (Rose, attempting to eat Cheerios from the breakfast table), Christine suggested that most other parents might travel with such, and Rose didn't much mind. Apparently the building was once a hospital, and our room had once been the delivery room. Delivery Room, meet Baby. 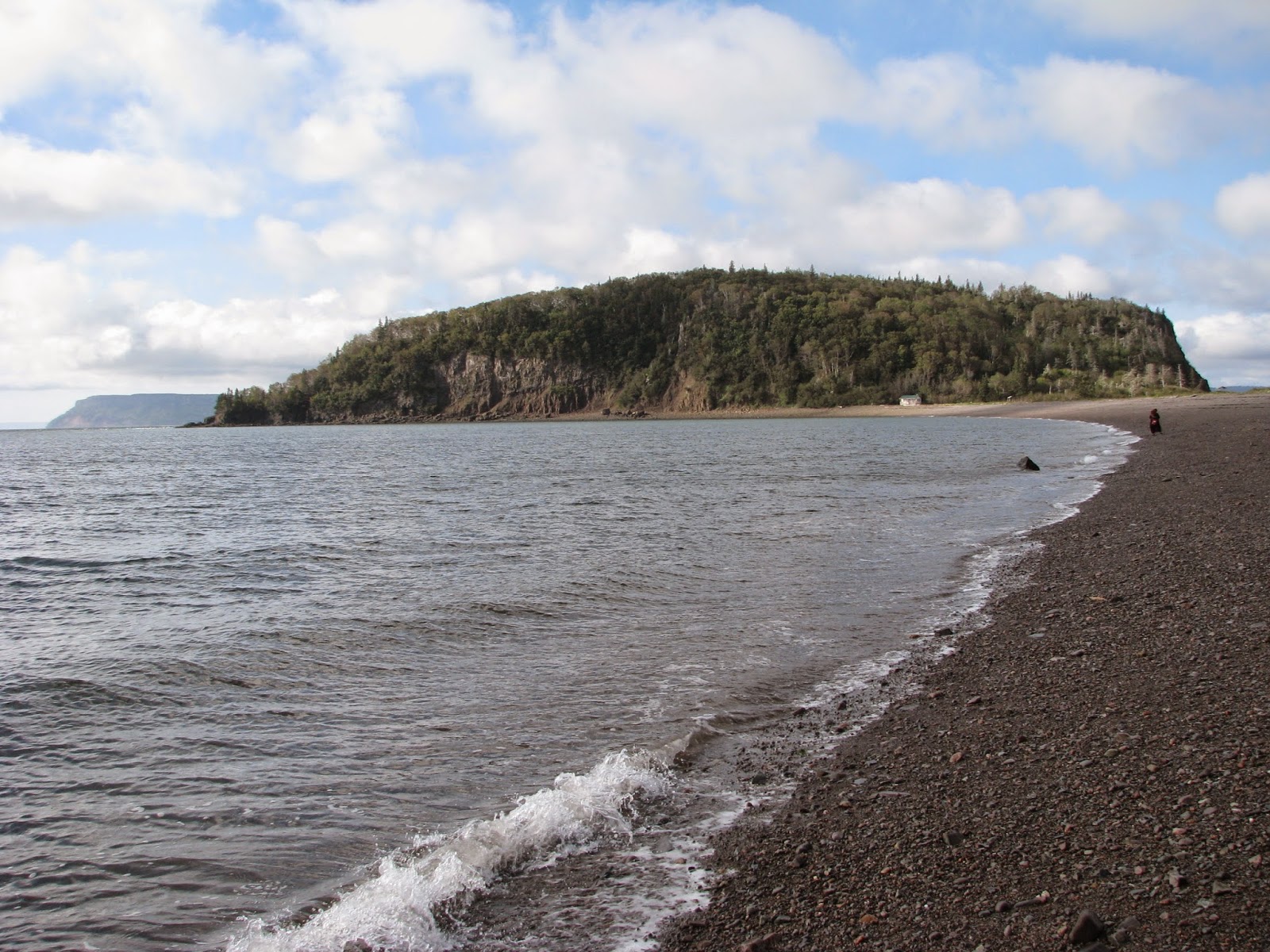 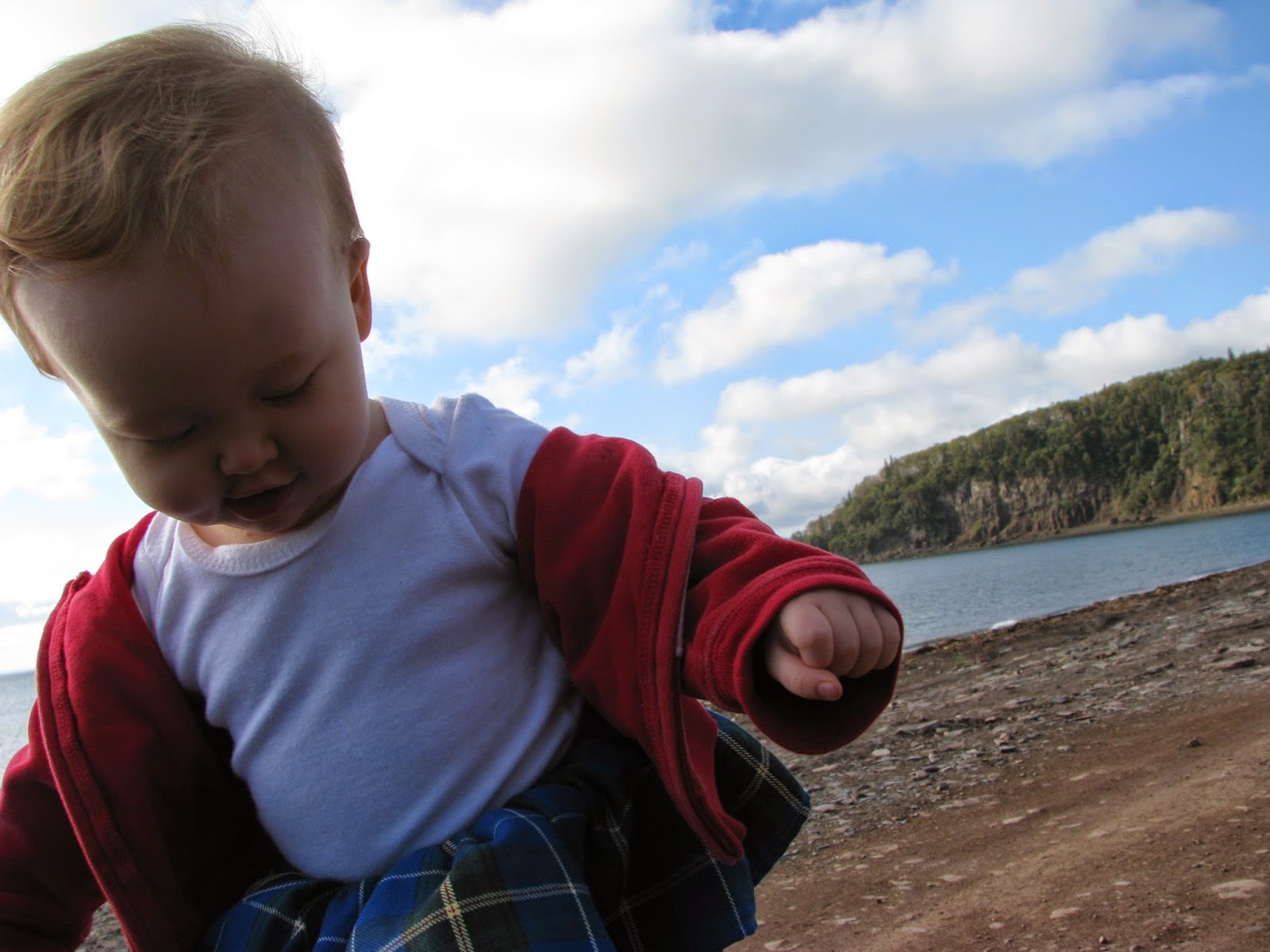 Our morning included the Bay of Fundy, wandering the beach right by The Ottawa House By-the-Sea Museum, known as the summer home of Sir Charles Tupper (another distant relative of Christine's). We wandered the beach for a bit, and Rose picked an array of stones, and wore the onesie-with-kilt (Nova Scotia tartan) that Christine picked up for her at the Glengarry Highland Games. Christine walked far further than we did, with Cape Blomidon in the distance (can you see her in the far, far distance, above?). Rose and I kept close, as we do. 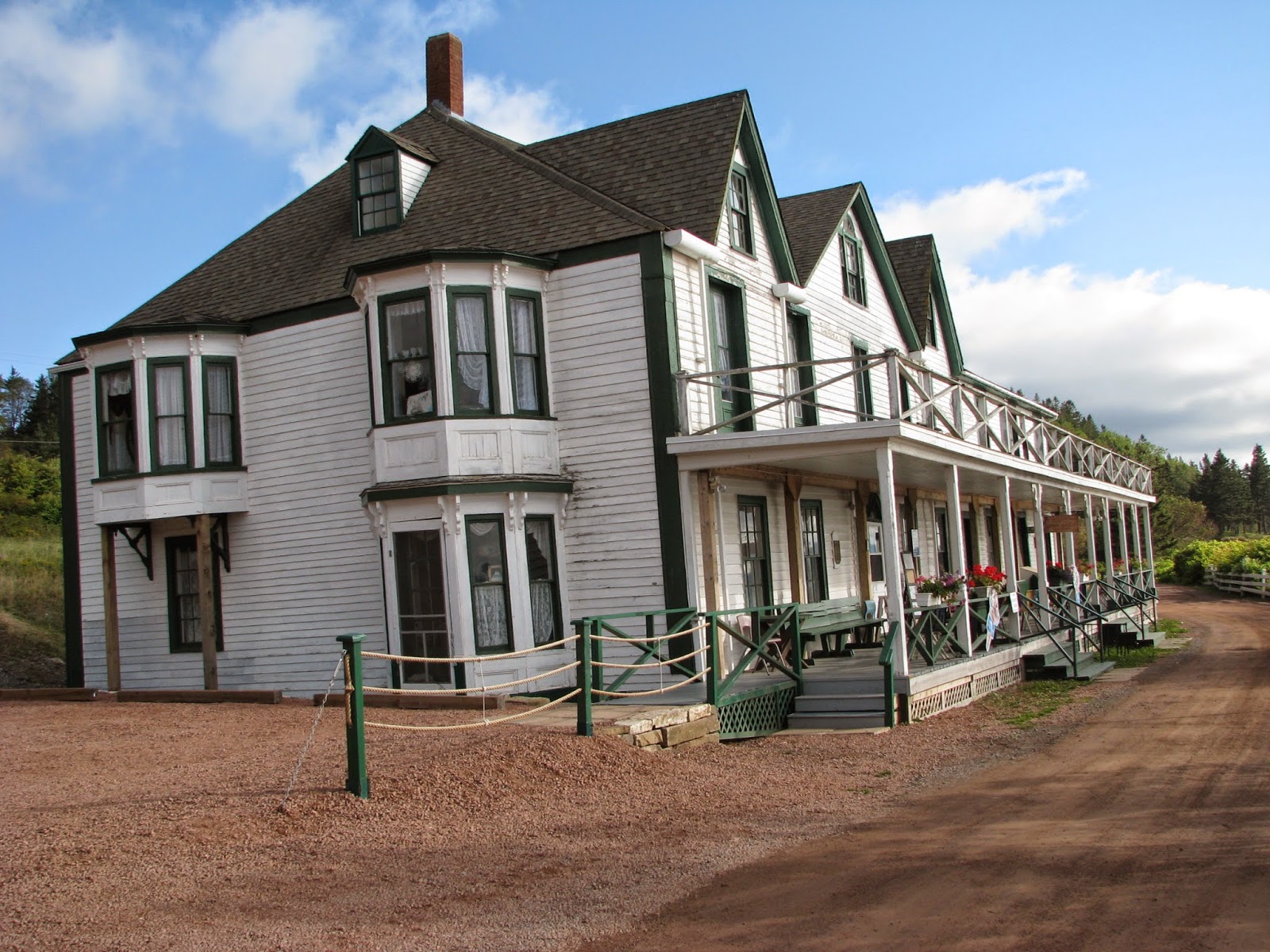 Apparently the shore is known for amethyst, but we found nothing of the sort. Apparently one has to break rocks to discover them inside (we weren't travelling with any such devices to break things apart).

The Ottawa House was impressive, but the tour far less than the Steeves House (which made me appreciate even further our experience there).

This was another building on summer hours, despite September. It allowed us all to pretend that summer wasn't actually over. Oh no. 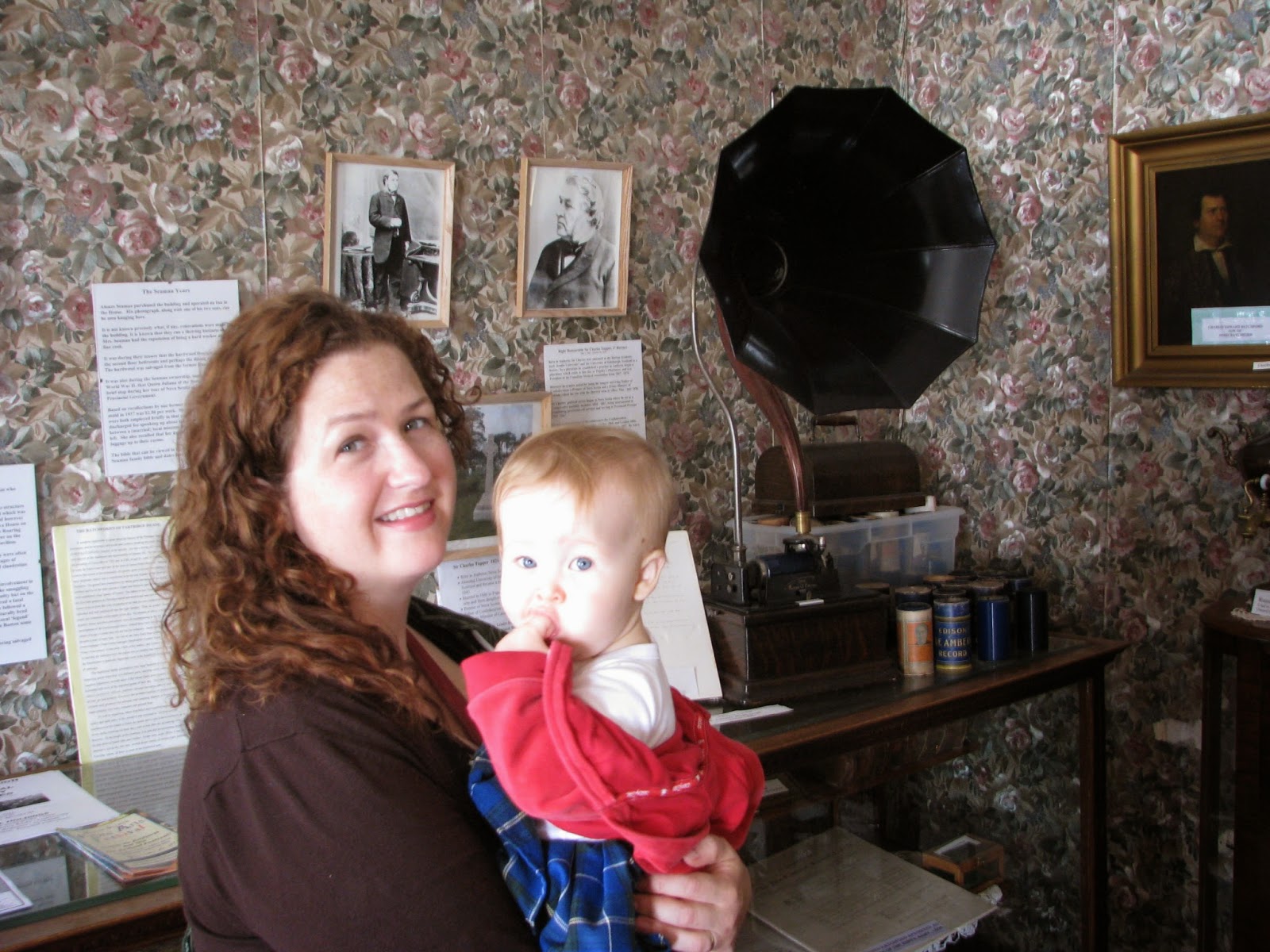 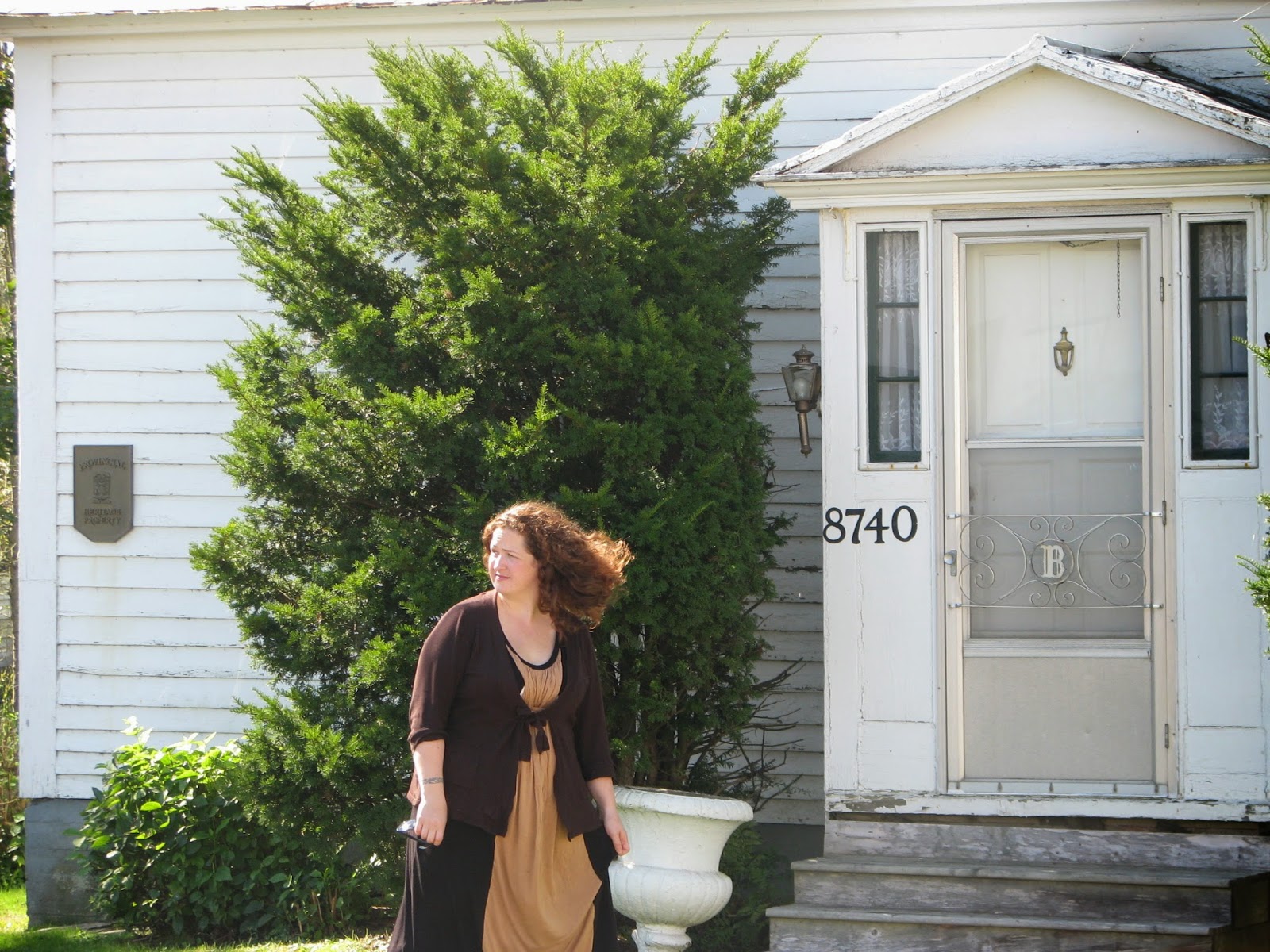 In the photo above, Christine and Rose in Sir Charles Tupper's front room, surrounded by photos.

Later, driving and driving and driving (including some places the gps took us we hadn't exactly planned on), we accidentally came upon the house that Elizabeth Bishop lived in as a child, with her grandparents. Apparently it had been a writers retreat for some time, but is currently for sale. How is this house not a museum? How can a building like this be for sale at all?

When we couldn't figure out where it was (oh, Christine said, the Elizabeth Bishop House is in this town we're passing through!), we stopped at a gas station. Where is it, I asked? The man at the counter pointed across the street. How random is that?

Someone out there has to purchase this house. Why is it not a museum? 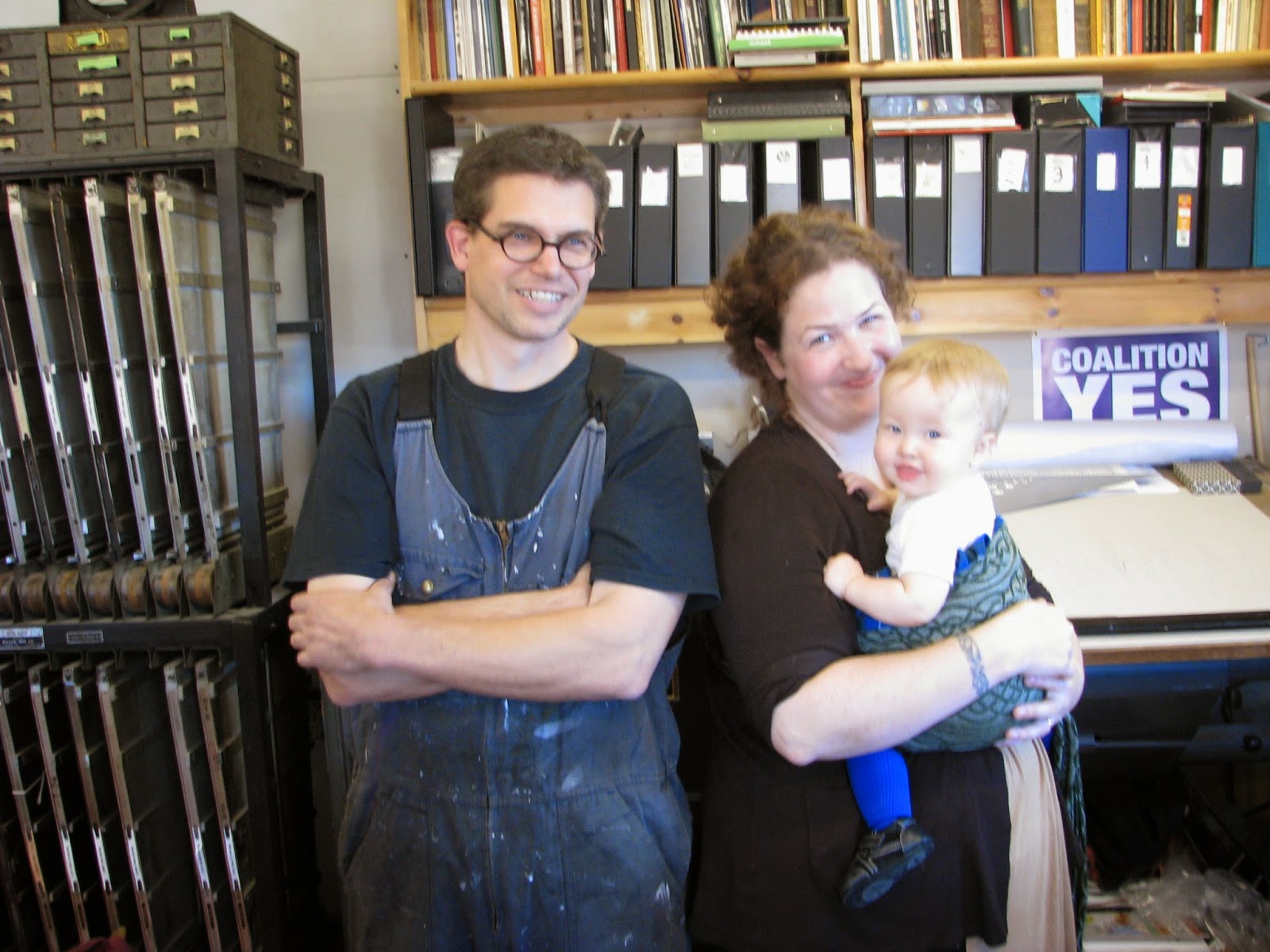 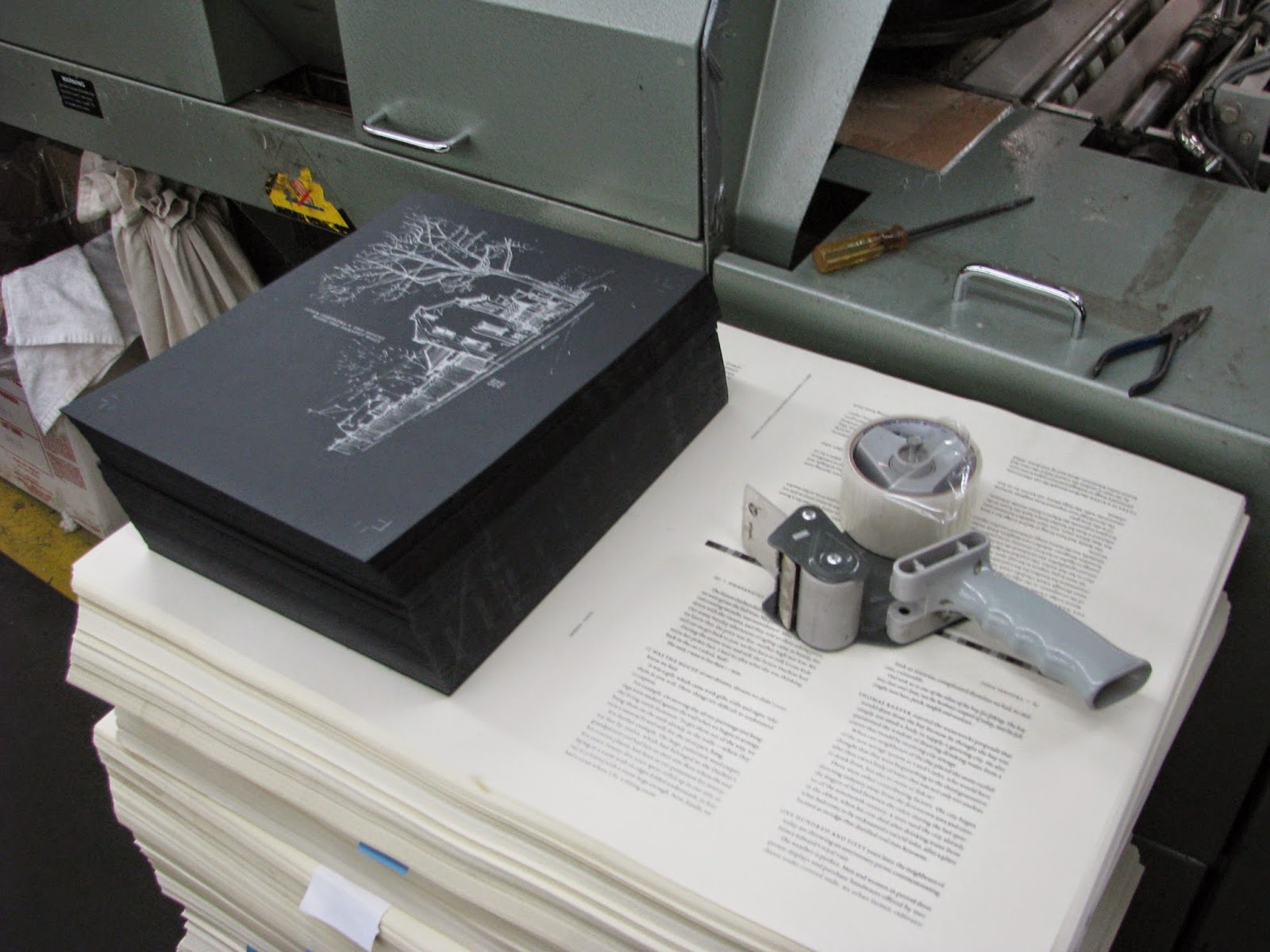 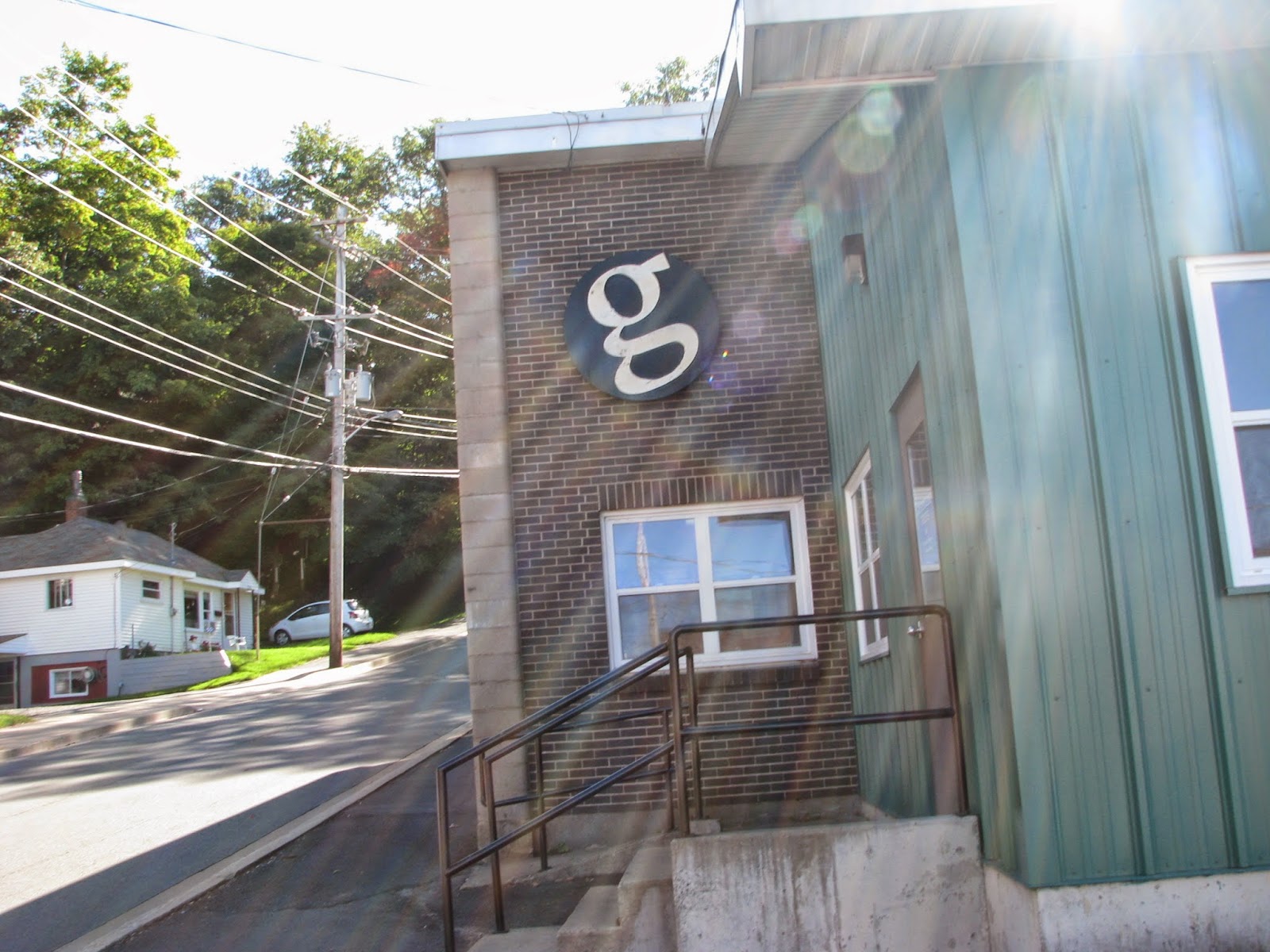 By the afternoon, we'd managed our way to Gaspereau Press, where Christine had worked for a couple of years roughly a dozen years back. After some twenty years of irregular correspondence over email (begun when Steeves was still a student at Carleton University) I was finally able to meet the illustrious Andrew Steeves, and we spent some good time with him as well as Gary Dunfield (who I'd met at a Griffin Awards Gala or two). The space is absolutely amazing, and worth a visit. We got a tour of the building (moved since Christine worked there), and Rose crawled around the floor, turning the palms of her hands black. We even saw a new memoir by John Terpstra as it was being built.

After twenty years, it was good to finally meet Andrew (and we were in agreement on a great many things--far more than I might have suspected), and he was kind enough to give me a selection of some of the chapbooks they'd been producing over the years (they were good enough to do one of mine, even, as part of the series), and I left with a small stack of works by Triny Finlay, ian letourneau, Brian Bartlett, Wanda Campbell (a book Christine typeset while at the press), Lisa Martin-DeMoor, Alison Smith, Peter Sanger and Tonja Gunvaldsen Klaasen (a poet I really hope has something new out, soonish). There are other chapbooks in the series, but I already have at least a couple of them. Over the years, I've reviewed some of them here and here and here (for example). 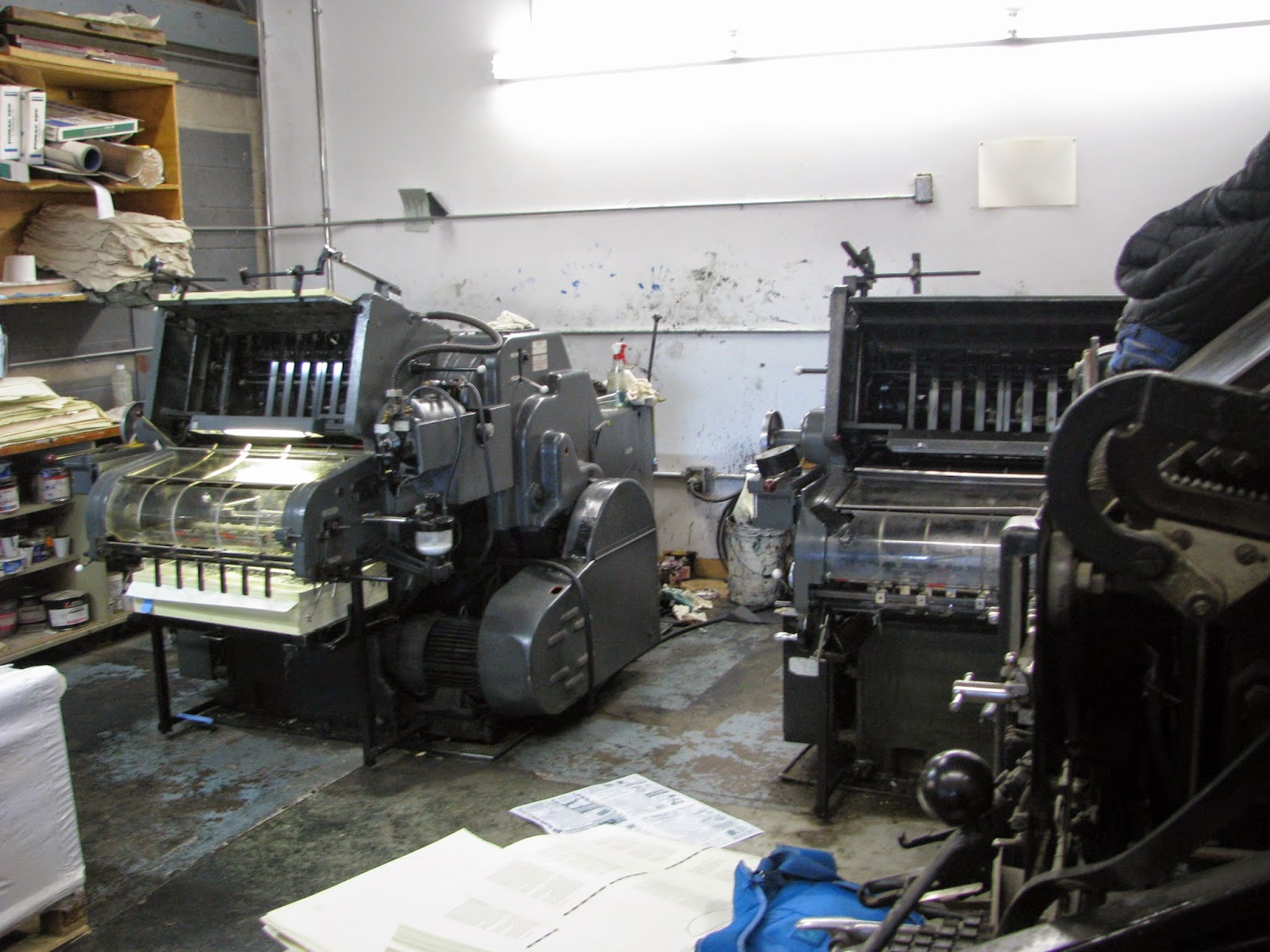 And of course, Rose managed to crawl around on the floor and slip, landing her head on the side of one of the big machines before hitting the floor, far more startled (and tired) than anything else. A stain of black ink all across her white onesie and the side of her face.

Given that Christine had lived here for a while, during her studies at Acadia University and subsequent Gaspereau Press staff, the trip felt like a kind of homecoming. She pointed out buildings that used to be other buildings (including the liquor store that formerly housed the furniture store where she'd purchased the bed that now lives in our spare room), and where she'd done this, and that, and that other thing. I was being introduced to her historical spaces.

And then there was the building named after her half-uncle's mother's family. Apparently her grandfather's first wife had come from quite a wealthy family. Who knew? 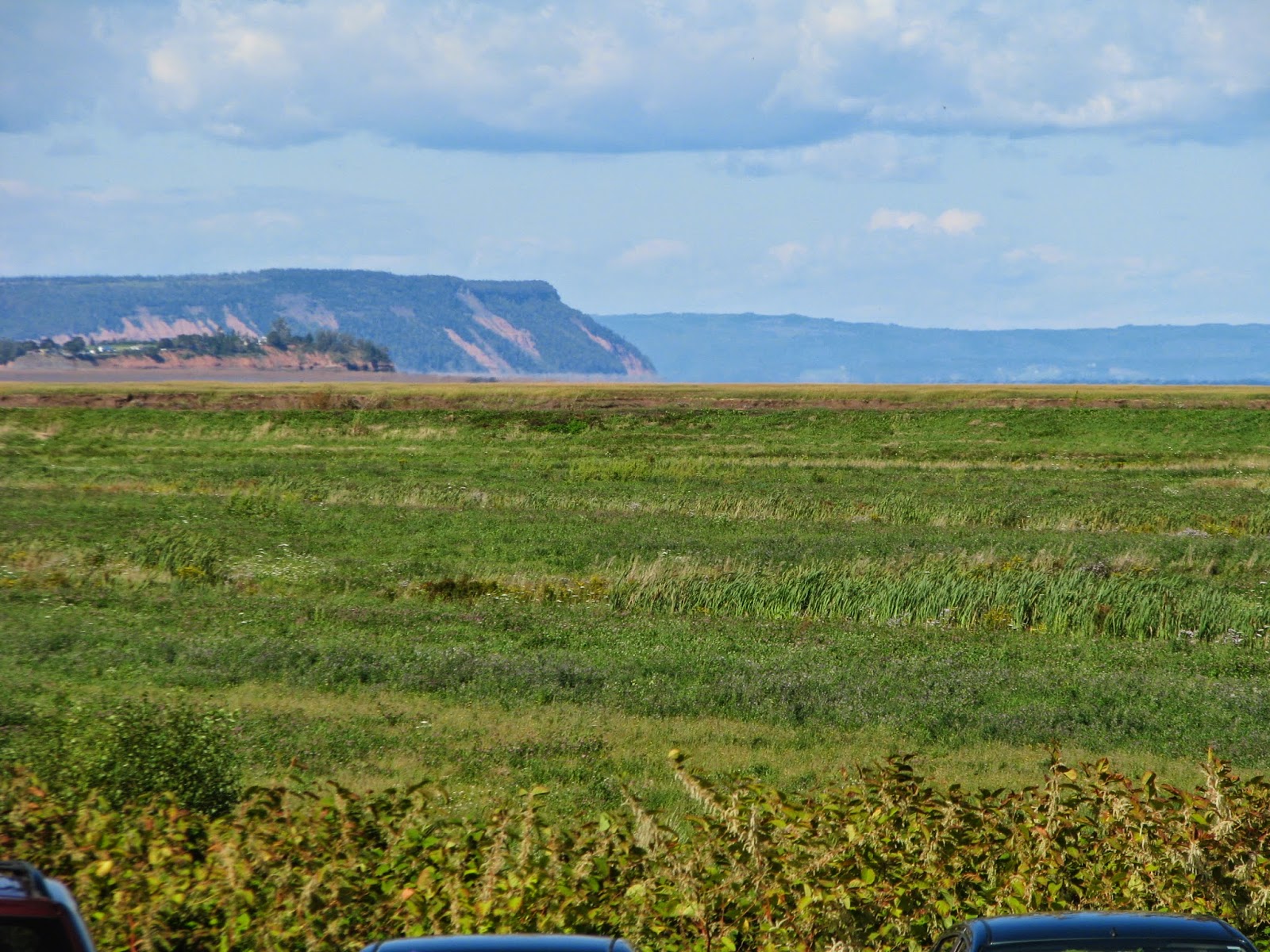 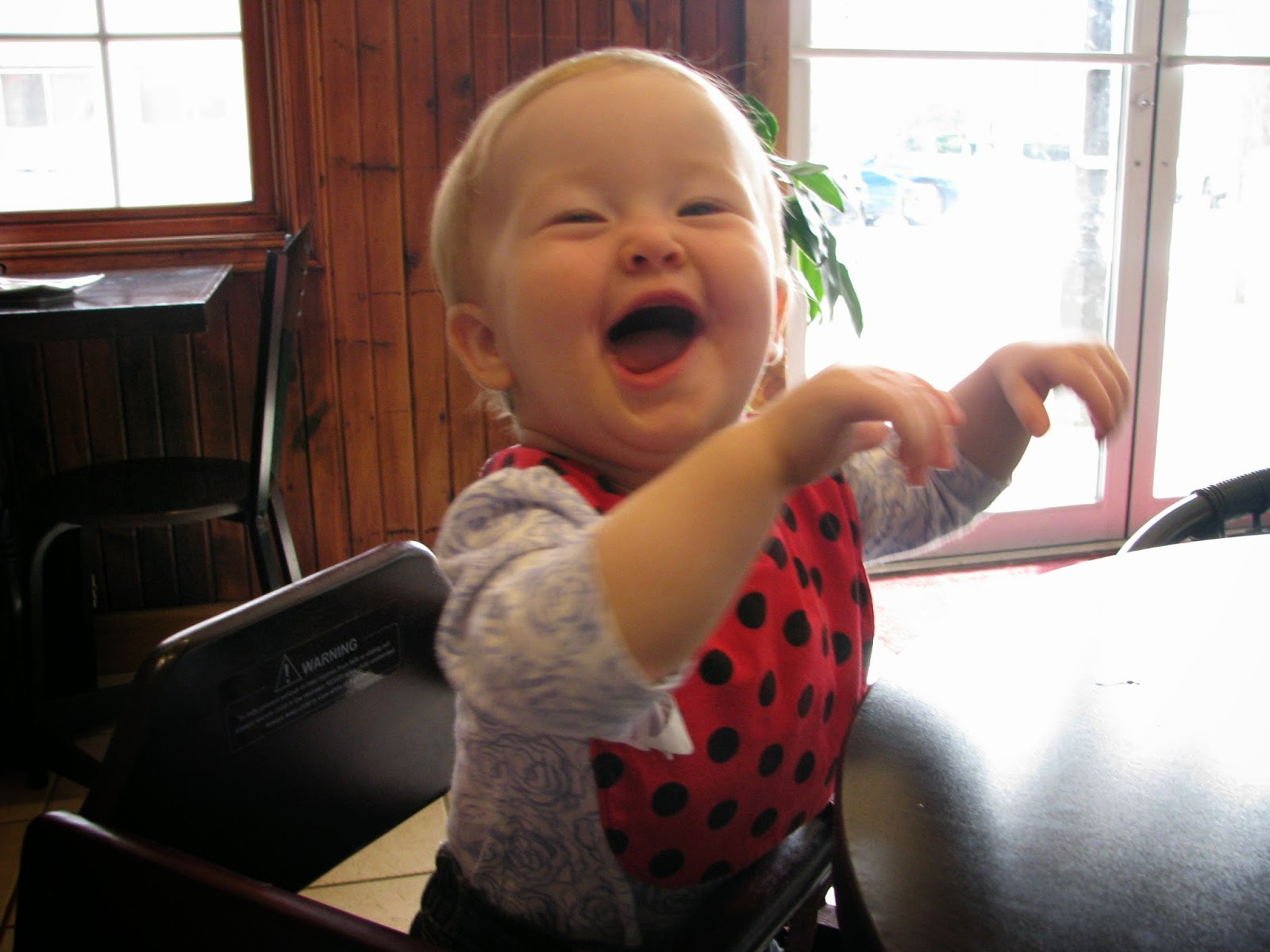 Thursday, September 18, 2014: We spent two nights with former Gaspereau Press publicist Beth Crosby, and she and her husband were both entirely lovely and generous, and were thrilled to be able to spend time with the baby (photo of Rose and Beth playing with lego, below). It's always nice on a trip to be able to mix hotel and friend's homes, but it makes for a slightly trickier thing to visit someone's house with a baby (one never wants to be in the way, etcetera).

And in the morning: another brief coffee with Mr. Andrew Steeves, sitting in a coffeeshop where Rose did her best to say hello to everyone, charming strangers and Steeves alike. 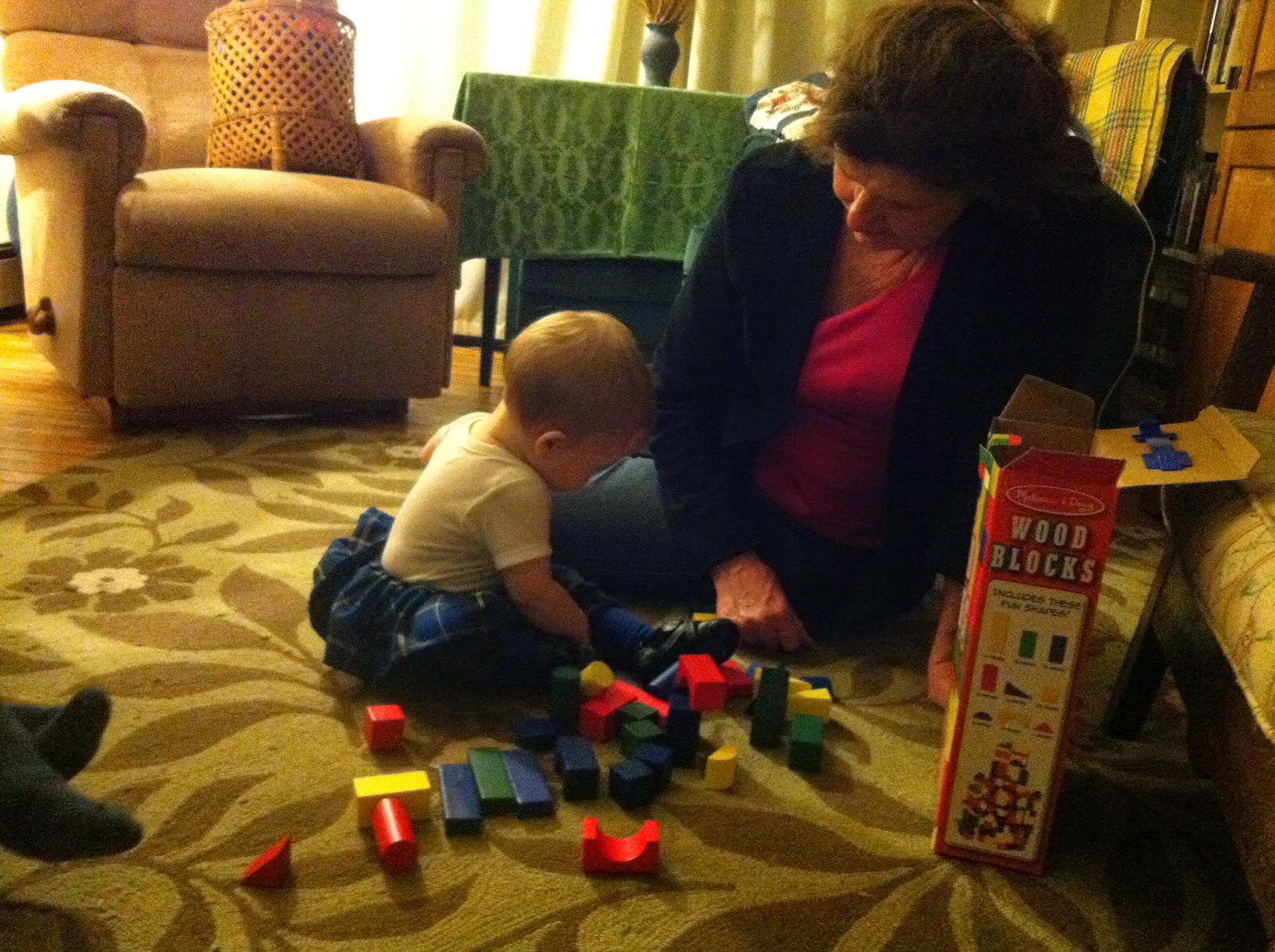 While in Wolfville, Christine did a small talk for a creative writing class, invited to speak by her former thesis adviser, Wanda Campbell. She was generous enough to take us all to lunch first, which was quite lovely. Rose and I wandered the town during the span of the class, and baby slept in the carrier.

And we were able to see Cape Blomidon, sitting in the Bay of Fundy, from the opposite side [above].

We wandered, and even managed to say hello to some of the other faculty in the department, including poet Lance La Rocque and Herb Wyile (who I met at the Postmodern Conference a few years ago at the University of Ottawa, and published a very cool book of interviews). 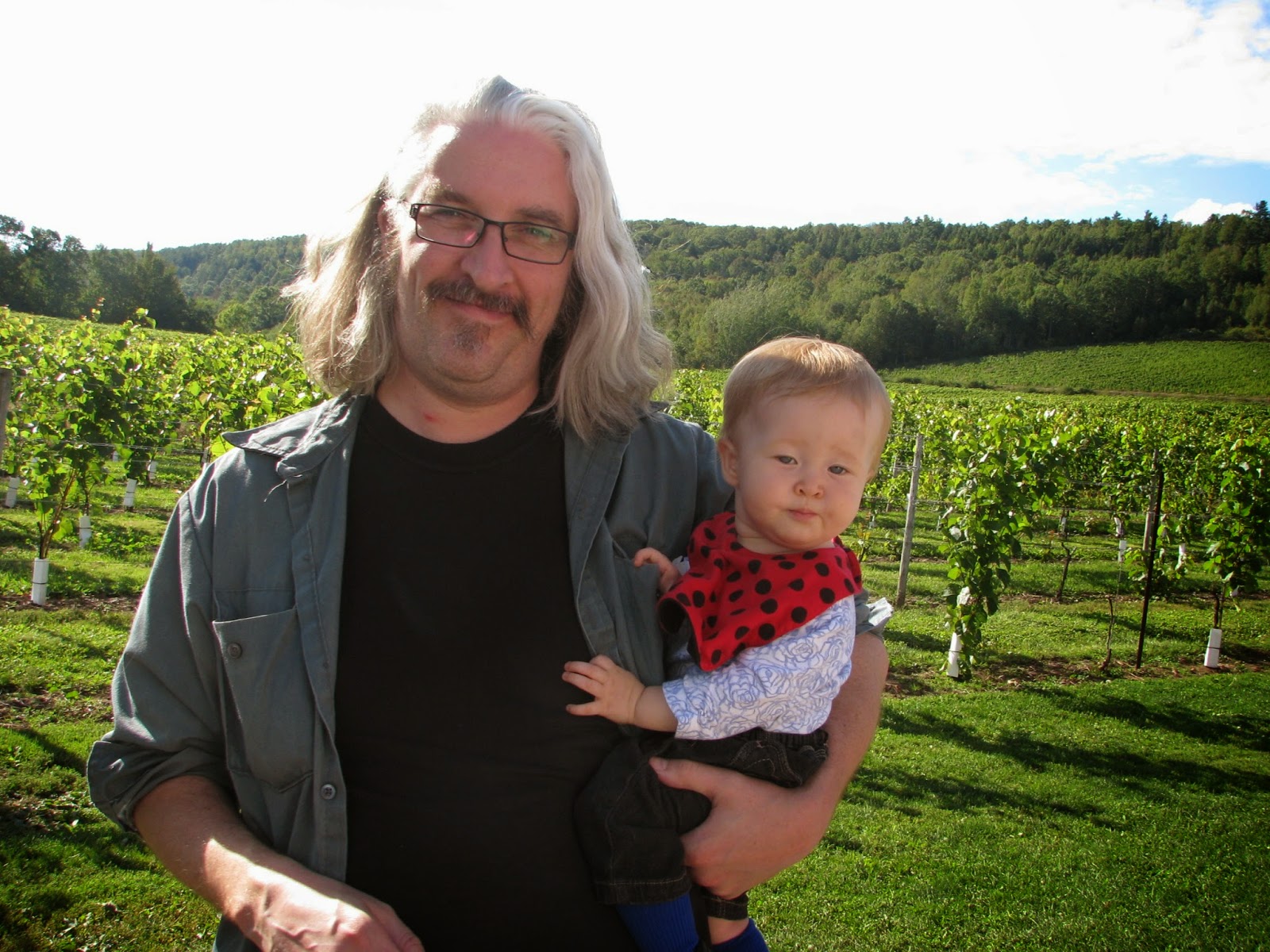 Upon leaving Acadia, we wandered over to the house Wanda and her husband were renovating, with a magnificent view of the valley below. Oh, what a view. Why, exactly, did I not take any pictures of that magnificent view?

After Wanda's house, we managed not one but two wineries: Gaspereau Vineyards and Grand Pre, both of which were thrilled to help keep baby Rose entertained (which impressed us). She wandered the floors (supervised, obviously, by us), and the second winery even managed to pull out a box of toys for her to play with (really?). 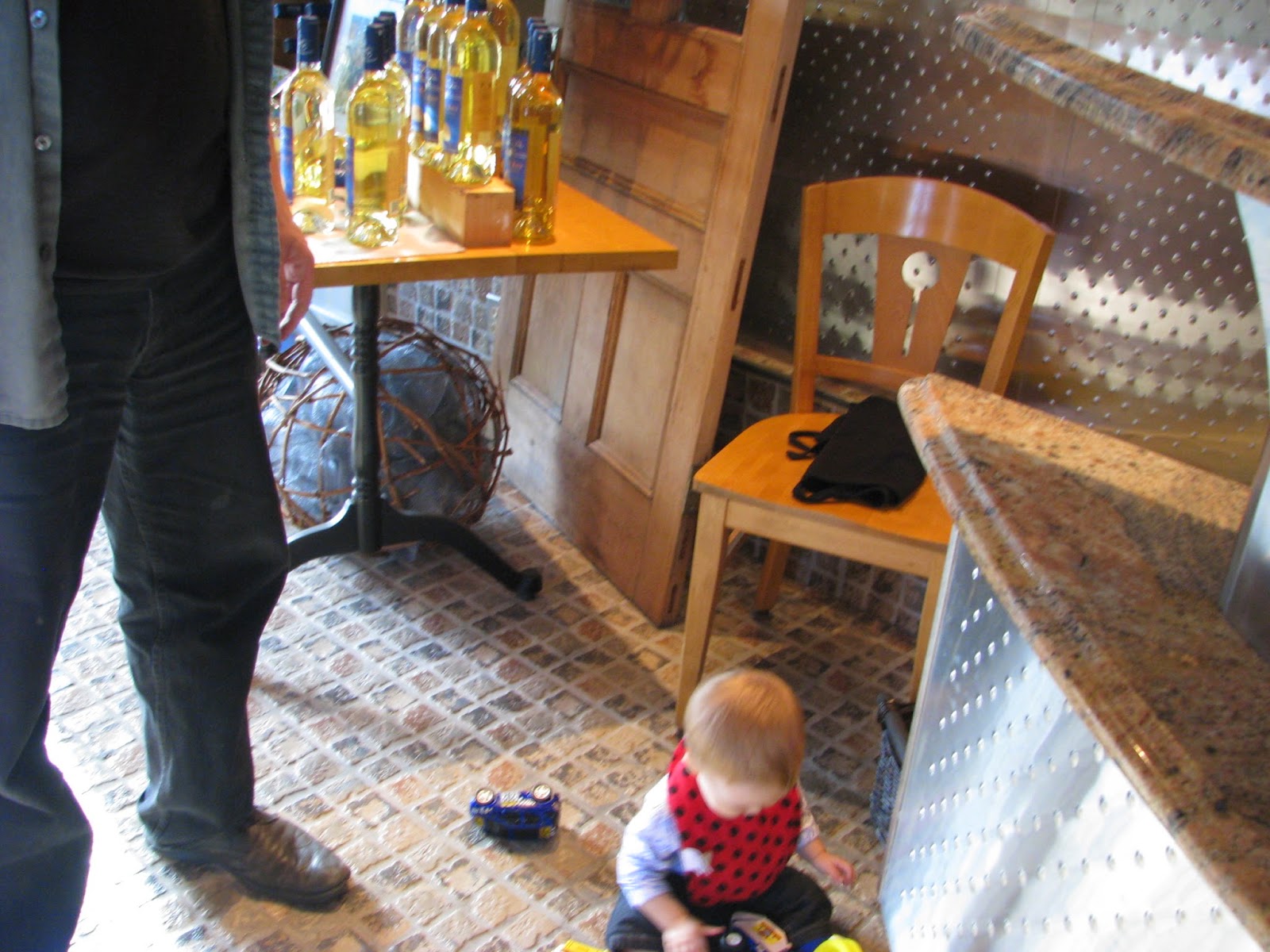 In-between: we visited a wool store, housed in a converted barn on a little farm, with chickens, sheep and other animals. Rose was angered at the fact that the chickens wouldn't say hello to her, despite her numerous attempts. She was indifferent (and even baffled) by the sheep. But perhaps, after her disappointment with the chickens, she had nothing left to offer the (also indifferent) sheep. They were sheep, after all.

Next: some Acadian stops, Saint John again, and the wilds of Maine...