Trumpet vine to maple branch lashed. Finch following finch aft the stone wall. The granite statuette stowed away & the wooden door scrapes closed. & I
was your Rose, your Lily, your Loralie dying over & over with the slow pause of an early silver screen, grass gone nickel, skin gone glycerin.
& in the corner the shotgun & the emptied urn, rusted urn, the lifting stone where pillbugs curl & hide as heavy in wet wool you leave the scene through the garden door.
Under the rubric of excuse is the story in which I was last in a lineage of hunters, the once-seasonal rain that wouldn’t go.

*
Now it was autumn & the end of the year mistaken for mineraled dirt, the time of departure become worn. From the moon’s quarter to its half, rains had fallen & all the hill streams ran in flood. As the piano performs scale after scale the piano becomes exception. (|Insterstitial Weather Remnant:”)

American poet Karla Kelsey’s third trade poetry collection, A Conjoined Book (Omnidawn, 2014), is a conversation between two texts, two poetry collections separately composed that she brought together in a single volume. As she writes in the interview that accompanies the press release:

When, in 2006, I moved to Central Pennsylvania, I never had lived so far east, nor had I—a native of Southern California—ever lived in such a rural area. What struck me first was the enormous beauty of the landscape: all trees and river, I felt I was living inside an emerald. Then I began to learn the environmental trauma the landscape had suffered, and still suffers, from the legacies and traditions of mining, lumbering, and now fracking. Also: there are contradictions in such places where the wide, slow Susquehanna runs idyllically along small farms—but between river and farm container trucks zoom past both Amish horse and buggies and adult bookstores. At one point near Harrisburg the road crests through rounded green hills to a view of Three Mile Island. The first book, AFTERMATH, seeps in this landscape, foregrounding the embodied experience of beauty and rend. There is catastrophe under-tremmoring the book, but it remained unnamed.

After writing AFTERMATH I thought: what if the catastrophe were to be named? What, then, would happen to the language that I have on the page? How would it curve to an “aboutness?” The Grimm brothers’ tale, “The Juniper Tree”—wherein a stepmother kills her step-son and allows her daughter to take the blame—intrigued me because of its savageness, because of its questions of guilt and responsibility. Also, the boy’s bones, buried under the same juniper tree that shades his birth-mother’s grave, transform into a bird that avenges his death—an intriguing metamorphosis of innocence into the agency of the natural.

I re-worked AFTERMATH around this tale with the intention of revision, but in the end I found that I had written a second book, Become Tree, Become Bird. A handful of friends were kind enough to read the two different books and to offer their opinion on which book was stronger. G.C. Waldrep, who shares this Central Pennsylvania landscape, suggested that I put them together. Instantly I loved this idea, for it would foreground what happens when narrative is introduced to landscape and embodied experience. The project became A Conjoined Book. 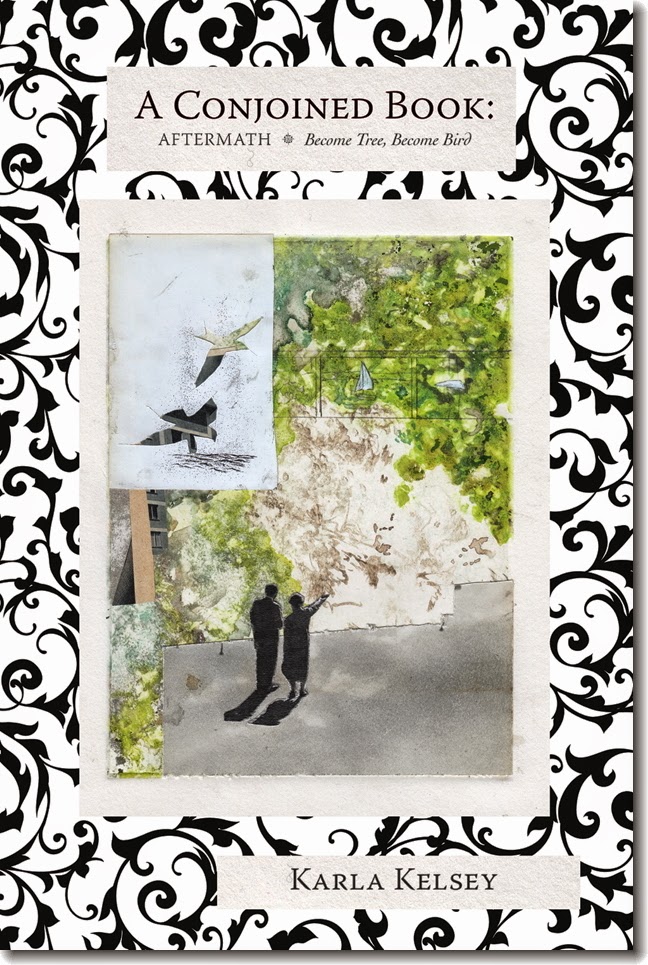 One can see the resulting texts as a pair of accumulations, a rush of sketched-out notes built in a couplet of books set together in a binary axis (in this case, a binding). How do “AFTERMATH” and “Become Tree, Become Bird” interrelate, and how are they separate enough that they are required to be seen as stand-alone projects? Both projects work and weave their way through a lyric collage of retelling fables and fairy tales, providing physical descriptions and observations of the natural world, and the way memory affects the ways in which we actually remember. The differences, one might suggest, between the two volumes are razor-thin: as the first focuses on perspective/vantages and a series of fables, the second is composed around birds, weather and a series of afterimages. Given that she has titled the first work “AFTERMATH,” and the second section includes a poem such as “Afterimages:” and the series of poems titled “Interstitial Weather Remnant:,” it is as though Kelsey focuses her gaze throughout the two works on what remains after a particular event, whether a trauma, devastation or storm. She writes out the remnants themselves, using the scattered, disparate pieces to shape together into something coherent, complex and remarkably solid. It becomes curious to see Kelsey’s A Conjoined Book adding to an increasing list of recent poetry titles, a number of which have appeared through Omnidawn, dealing with environmental matters, such as Barbara Tomash’s Arboreal (Berkeley CA: Apogee Press, 2014) [see my review of such here], Julie Joosten’s Light Light (Toronto ON: BookThug, 2013) [see my review of such here], Robin Clarke’s Lines the Quarry (Richmond CA: Omnidawn, 2013) [see my review of such here], Brian Teare’s Companion Grasses (Omnidawn, 2013) [see my review of such here] and Ken Belford’s Internodes (Vancouver BC: Talonbooks, 2013) [see my review of such here]. As Kelsey writes in “AFTERMATH”:

for hallowed arms. & the red
torn from my dress from the

trees. & the blue torn from

banks covered over
with the lightest
of frost. & so gone

to the river & able
for this moment

to have been what was lost.

Posted by rob mclennan at 8:31 AM
Labels: Karla Kelsey, Omnidawn