I swill beer
to still my fear
of the coming year

& there are mornings when I wake up
so riddled with psychic breakup
I can hardly hold on to my coffee cup.

I lived here three months
in a house where I never once
heard anyone say please or thanks.

Not the best indoor weather
for getting your head together
but it’s a personal matter. (from “Vancouver in April”) 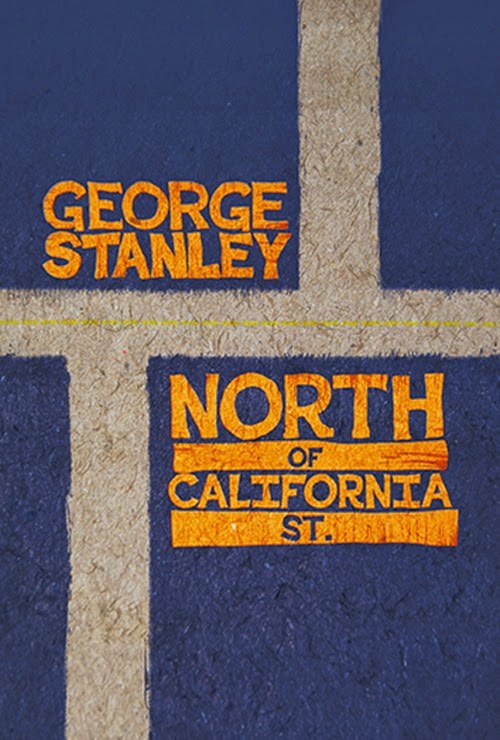 “[A]ssembled from the contents of four earlier, out-of-print” poetry collections is Vancouver poet George Stanley’s impressive North of California St. (Vancouver BC: New Star Books, 2014). Subtitled “Selected Poems 1975-1999,” the book is constructed from the bulk of four of his Canadian poetry titles: Opening Day: New and Selected Poems (Oolichan Books, 1983), Temporarily (Gorse-Tatlow, 1985), Gentle Northern Summer (New Star, 1995) and At Andy’s (New Star, 2000). For years, George Stanley has been known as one of a selection of arrivals into Canadian literature from the San Francisco Renaissance, as he, Stan Persky and Robin Blaser each headed north into Vancouver from a rich series of circles that included poets Jack Spicer, Robert Duncan and Joanne Kyger. It is well known that Stanley was a student of Jack Spicer, and it was through Spicer himself that Stanley’s first poetry collection, the chapbook The Love Root (San Francisco CA: White Rabbit, 1958), was published.

It seems clear that North of California St. works to articulate a period of Stanley’s work where his poetry really began to cohere, changed through his arrival north of the border and beginning to interact seriously with Canadian poetry and poets, including George Bowering, bpNichol, Fred Wah and Barry McKinnon. It is as though this is the first writing of Stanley’s to properly be situated in Canada; even as his poetic gaze occasionally shifted back to the city and country of his birth, it became more and more through the filter of Canadian influence. It is from this perspective that he begins to adapt his worldview, as he writes to open the poem “The Berlin Wall”: “Why, now that it’s breached, broken, does it cause / such consternation in me? // CBC brings me / the cries of happy youth, the singing, people / climbing up on the new meaningless Wall, / drinking champagne —[.]” Having been involved in poetry events via Warren Tallman in Vancouver for some time, Stanley moved first to Vancouver 1971, and the five hundred miles north in 1976 to Terrace, returning only to Vancouver some twenty further years later.

Stanley’s work has always seemed comfortable in that space between the past and the present, and between geographies, even as he articulates his immediate present, including his discomfort of being in the air or travelling on the Sky Bus, between the cities of San Francisco, Vancouver, Kitsilano and Terrace. In her lengthy introduction to the collection, poet and critic Sharon Thesen describes Stanley’s “Aboutism,” writing that “Since his move back to Vancouver in 1993 to take a job at Capilano College (later University), Stanley has more than half seriously promulgated the poetics of ‘Aboutism’, his rebuttal to the excesses of the ‘language-centred’ excesses of the poetic avant garde […] which concerns itself with its unfolding context: ideas, thoughts, locales, occasions, persons, and words.” She continues:

Aboutism and transportation are natural companions, one enabling the other throughout North of California St. Stanley’s first book is entitled Pony Express Riders; his next-to-last, Vancouver: A Poem, was written while riding the bus between North Vancouver and his home in Kitsilano, a journey that involves crossing Burrard Inlet on the Sea Bus. To get to and from Terrace, along with “CBC brass” and timber executives, Stanley would fly nervously on small planes, some of them bush planes. The “Mountains & Air” lyric sequence is an Aboutist text from the point of view of someone encountering a terra incognita. Stanley’s airplane poems are almost always about mortality and fatality. Flight is a subject that creates opportunities for fear of the loss of “plain reality,” of losing touch with the earth, which Stanley likens to “the truth.” The sense of loss, inspired by flight, of the world, the person, the real, and the familiar, is not a backward-glancing nostalgia for a “golden” past, which we know, or are told we know, is a fiction; but rather derives from a sensed absence or emptiness in the present. In an essay about the late James Liddy, an Irish contemporary of Stanley’s who taught poetry in the Milwaukee, Wisconsin, Stanley notes that Liddy’s poems (much like his own, I would say) “open outward into the world, thus allowing the incarnate (opposite of virtual) object to be subject.” As in Stanley’s own work in this volume, “the real refuses to submit to the schema, the length of time in the line. Images come faster than they can be accommodated; the charge is to grasp the moment in its flight.”

As Thesen describes in her introduction, “Not so much a career retrospective as a retrospective reading of these four books,” the current volume sets aside earlier works more in keeping with an earlier apprenticeship, including not just that first title, but his Tete Rouge / Pony Express Riders (White Rabbit Press, 1963), Flowers (White Rabbit Press, 1965), Beyond Love (San Francisco: Open Space, Dariel Press, 1968), You (Poems 1957 - 67) (New Star Books, 1974), The stick: Poems, 1969-73 (Vancouver: Talonbooks, 1974) and Joy Is the Mother of All Virtue (Prince George BC: Caledonia Writing Series, 1977), as well as a variety of single-poem broadsides, including The Rescue (San Francisco Arts Festival, 1964). The word “apprenticeship” might be apt, but inadvertently suggests a dismissal of an enormous amount of activity, far more than what the current volume acknowledges. Stanley himself articulates the difference between that much earlier work and some of the work presented in this new volume in his“12 or 20 questions” interview, posted October 25, 2011 at Dooney’s Café:

My first chapbook (The Love Root, White Rabbit 1958) was ephemeral. Just a few pages of mostly pretentious verse – i don’t even have a copy of it any more. It was the second chapbook (Tete Rouge/Pony Express Riders, White Rabbit 1963) and the third (Flowers, White Rabbit 1965) that immediately gave me a readership in San Francisco and beyond, and were a mark of my recognition as a poet by the older poets (Jack Spicer and Robert Duncan), as well as by Joe Dunn and Graham Mackintosh, the principals in White Rabbit Press.

My most recent work (“After Desire” [The Capilano Review  3.14] ) is intensely personal. This marks a shift from much of the poetry I had been writing over the previous three decades, where my aim was to understand the world — in particular, how capitalism works, first in Terrace BC (“Gentle Northern Summer”), where being so new to the community I could see it more objectively, with less distortion than familiarity would have brought. Later I wrote poems (“San Francisco’s Gone”) to understand the history of the city and of my family, especially my parents, who were both born there.

North of California St., then, might argue for as much as a difference in approach as a difference in perspective. In her introduction, Thesen argues for a lack of larger attention throughout Canadian literature for Stanley’s work, something that seems to have eluded him, despite the length, breadth and bulk of his publishing which, frustratingly, can even be argued as an offshoot of the fact that Stanley lives in the western part of Canada. In spring 2011, Vancouver’s The Capilano Review produced “The George Stanley Issue” [see my review of such here], which featured critical and creative appreciations by a list of Canadian and American writers alike, including Michael Barnholden, Ken Belford, George Bowering, Rub Budde, Steve Collis, Jen Currin, Beverly Dahlen, Lisa Jarnot, Reg Johanson, Kevin Killian, Joanne Kyger, Barry McKinnon, Jenny Penberthy, Stan Persky, Meredith Quartermain, Sharon Thesen and Michael Turner, as well as an interview with Stanley, and a small selection of previously-unpublished poems. Publications that have been produced since the period North of California St. covers include the chapbook Seniors (Vancouver BC: Nomados, 2006), and trade collections Vancouver: A Poem (New Star, 2008) and After Desire (New Star, 2013), as well as the more than two hundred pages of A Tall Serious Girl: Selected Poems1957-2000 (Jamestown RI: Qua, 2003), edited by Kevin Davies and Larry Fagin. This collection, too, was created out of a frustration for Stanley’s lack of attention, as the editors of that American selected open their introduction:

This book has emerged partly from a certain frustration experienced by its editors. The Canada—U.S. border, though long and notoriously undefended, is real. When George Stanley (then age thirty-seven, but so youthful-looking that he was often mistaken for a draft dodger) crossed it in 1971, he all but disappeared from American literary surveillance. Though he maintained contact with his friends in northern California, and though more than a few Americans collected his limited-edition books and photocopied manuscripts, Stanley’s work has been, in effect, excluded from the canon of “vanguard” American poetry, and from the odd process by which the poems of a small percentage of poets become accessible in the wider world of classrooms and far-flung literary scenes. Though Stanley’s recent volumes, issued by Vancouver’s excellent New Star Books, are distributed south of the aforementioned border, too often, in our discussions with American poets young and old, we found mention of Stanley’s work met with near-total ignorance. Stanley had been inexplicably omitted from Donald M. Allen’s The New American Poetry (1960), and thus lacked the glamour of that association.