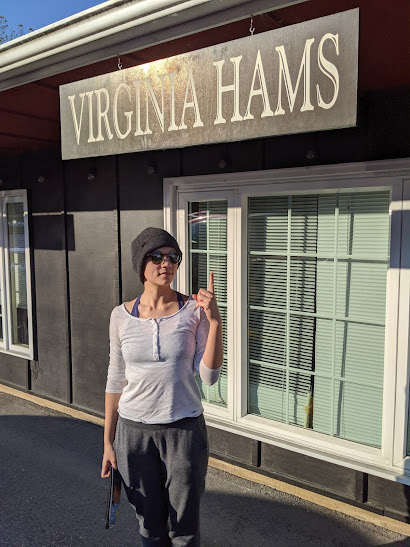 Alysia Sawchyn is a Features Editor for The Rumpus and currently lives in Northern Virginia. She splits her time between teaching professional writing and admin work. Her first book, A Fish Growing Lungs, was published by Burrow Press in June 2020.

1 - How did your first book change your life? How does your most recent work compare to your previous? How does it feel different?
I am waiting to see! I think it's too early to tell. I have a suspicion, but I'm not ready to share the secret yet. I can say that publishing a book is so much different than publishing an essay. It was the same thing with writing; I had this notion that since I'd written an essay before I could just multiply that effort times X number of essays I wanted to include in my collection. I was very mistaken.

2 - How did you come to poetry first, as opposed to, say, fiction or non-fiction?
It's funny—I wrote poetry when I was a kid. I grew up in a house full of books and there was some project at school where every student submitted a poem and someone picked "the best of" and published it into this tiny blue book. It had real binding and everything. I feel like I should go dig that up now. It was something about lemons and a garden. So I've been thematically consistent my whole life.

3 - How long does it take to start any particular writing project? Does your writing initially come quickly, or is it a slow process? Do first drafts appear looking close to their final shape, or does your work come out of copious notes?
Everything is so slow. I think I spend a lot of time stewing. There are weeks and months where the work is happening but it's all in the back of my head, and then I'll come to the page and it'll all dump out. And then sometimes it's like pulling out fingernails—one sentence at a time. And then there's all the time I spend between drafts, just getting some perspective. It's a mix! But it's always slow.

4 - Where does a poem or work of fiction usually begin for you? Are you an author of short pieces that end up combining into a larger project, or are you working on a "book" from the very beginning?
Very much the latter. I work at things and then eventually realize that they sort of stick together.

5 - Are public readings part of or counter to your creative process? Are you the sort of writer who enjoys doing readings?
I like the idea of readings. That is, I'm absolutely thrilled that my work gets to interact with other humans and I think that readings are an important part of a writing community, but I definitely go into a bit of a fugue state. I'm not entirely sure where the nerves come from. I've been teaching for years now, and I don't feel that way when I teach.

6 - Do you have any theoretical concerns behind your writing? What kinds of questions are you trying to answer with your work? What do you even think the current questions are?
With Fish, the larger questions and concerns were about pathologizing behavior, particularly in women and women of color. I don't know if I try to answer questions with my writing though. Someone once said it was a matter of "asking better questions," and I like that idea very much. For my current book project—I'm not fully able to articulate the questions yet. I'm circling it, still, but it's shadowy.

8 - Do you find the process of working with an outside editor difficult or essential (or both)?
I love editors. I haven't worked with a bad one yet, and my support for them is unequivocal. (Can you tell I work as an editor?)

9 - What is the best piece of advice you've heard (not necessarily given to you directly)?
Write the book you want to write.

10 - How easy has it been for you to move between genres (poetry to essays to fiction)? What do you see as the appeal?
It's okay. I dabble in both poetry and fiction—I've written and published in both—but honestly my heart lies in cnf. I think genre allows us different ways to tell the truth, and essay is the one that I can speak to most naturally.

11 - What kind of writing routine do you tend to keep, or do you even have one? How does a typical day (for you) begin?
I do not have a routine. I'll sometimes get into a groove, especially during summer or winter break, but it's otherwise very random. My Best Brain time is late morning (like 930-1130am) and then late night (1130-230), which as someone who isn't paid to write regularly, is very frustrating.

12 - When your writing gets stalled, where do you turn or return for (for lack of a better word) inspiration?
I read. There are some essays that I go back to again and again. The two I've returned to most recently are "Bathing" by Kathryn Winograd and "The Fourth State of Matter" by Jo Anne Beard.

13 - What fragrance reminds you of home?
I don't know what it's called, but I know it when I smell it. It's a particular blend of sawdust and . . . something, sweet, maybe? Sometimes when I get into an old car and the heater gets turned on for the first time in many months it reminds me the open-air markets in Ukraine.

14 - David W. McFadden once said that books come from books, but are there any other forms that influence your work, whether nature, music, science or visual art?
Absolutely. All of the above. There was a lot of music in Fish and my current project pulls from a lot of art installations and nature. I honestly want to do some kind of art-immersion for a month—a residency where I'm a giant sponge.

15 - What other writers or writings are important for your work, or simply your life outside of your work?
The list is very long. People have been so kind to me for reasons I don't understand. To avoid dipping into the feelings too much, I'll name instead about a book I read recently that just chewed up my heart: In The Dream House.

16 - What would you like to do that you haven't yet done?
Travel to Japan.

17 - If you could pick any other occupation to attempt, what would it be? Or, alternately, what do you think you would have ended up doing had you not been a writer?
A lawyer.

18 - What made you write, as opposed to doing something else?
I have no idea. I'd always been an artsy kid, and I wanted to document life. Somehow this seemed more marketable than engraving or painting, which are the creative endeavors I would like to get better at.

20 - What are you currently working on?
I am slogging away at Book 2. That's seriously the title of the word document, but the working title is I Have This Thing for Flowers. I also have one big essay that I've been revising for years that I'm chipping away at, too.

Posted by rob mclennan at 8:31 AM
Labels: 12 or 20 questions, Alysia Sawchyn, Burrow Press