mouth is somewhere else, ant farm, bee nest, little eloping hairs, windows are forms
of escape, off you go like a horse with your eyes swelling to pinpricks, horns that pierce
the fine tunic of road air, I keep getting moved around by strangers’ eyes, or they keep
getting moved around by mine, they have no satisfying angles, no pure margin, I hear
their humid speech, their chameleon words, borrowed, and there are fingers in them,
similarly, gaps in place of the crotch, fog powder, where differences are hard to touch,
unlatch, what is withdrawing, watershed, something pushing like a sun, up, since 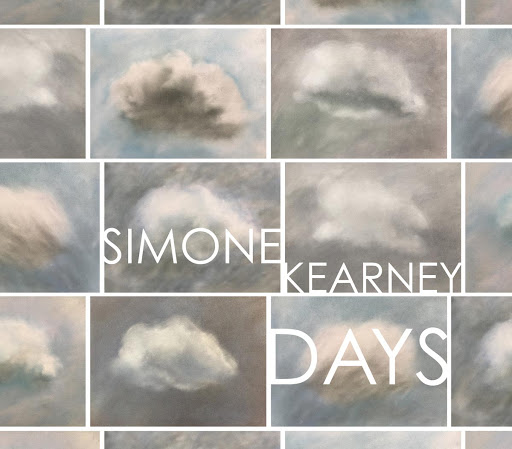 The latest from New York writer and artist Simone Kearney is the full-length poetry debut, DAYS (Brooklyn NY: Belladonna*, 2021), following her chapbooks My Ida (Brooklyn NY: Ugly Duckling Presse, 2017) and In Threes (Minutes BOOKS, 2013). DAYS is a book-length line, a singular lyric thread constructed in blocks of text, akin to the thread of Darren Wershler’s The Tapeworm Foundry (Toronto ON: House of Anansi, 2000) or Rita Wong and Fred Wah’s more recent collaborative art-text, beholden: a poem as long as the river (Vancouver BC: Talonbooks, 2018) [see my review of such here], stretching a singular sentence across the length and breadth of an entire book. DAYS could also be read as a particular kind of “book of days,” especially during pandemic-times, as the endless thread, days themselves indistinguishable from each other but for their slow, considered progression. “[…] an idea can have no corners,” she writes, “it can resemble / a propeller in a meadow, no one knows how it got there, but you are sitting in your chair, / only imagining things, an image erupts to compensate, and with talking, despite it all, / the apparatus of them, what you can’t understand or write down is lump in blankets […]”

DAYS pushes its seemingly-boundless sentence as a rush of words, a race to explore and discover the insides of language; of words themselves. “ […] like a memory with its meaning diluted into language,” she writes, early on in the book, continuing the thought on the following page: “like the limit of a digression, baggage we carry, perpetual history, and memory up on / a wall, what we had hoped for, as if we could trap ourselves, definite as background / music […]”

shows us otherwise, spheres of voices, all the spheres of beings, fragile, agile, opaque,
so full, come near, come with me, here, here you are, there, here is all this rich dirt in
which things grow, all the moisture of flowers, all the flowers flooding the atmosphere
with red, blue, and yellow, oily in air, yes, she dreams of entering germs like history
and making agriculture out of it, no logical position can amount for the semantics of
a body, its bones are tiny prisms, chunky light, imitations of knots that keep undoing,
they contain too much of what is more than their size, sudden understanding of words

What becomes interesting, also, is the realization that the book, Kearney’s book-length poem, appears to begin on the opening page the way every page begins: with an ongoingnesss. The suggestion is that the book begins mid-thought, and rushes forward as though the poem was always there, has always been there, pushing and thinking and speaking into and around and through the small cracks and crevices of languages. And yet, the final poem on the final page ends with a period, something I had admittedly not been expecting as I moved through the body of this collection. The length and breadth of her poem articulates the language of endless days, and writes an open stretch of field even as it sets to, if not conclusion, a point at which the poem comes to rest. The poem reaches an ending, and potentially a conclusion, having explored all the points and parts the poem required, as words congealing around an idea. “[…] in light things fester,” she writes, “there / before you, recently I, and all that, but more, and/or, and, door, curtain, open it, into the / other, and out again, I’m so there, all over, with, in, out, off, who, under, or where, here, / there, sea field, big open field, up, dimples etc., place in the field, field, field, more field.” Hers is an open field, but one that moves from the seemingly-endless into a point of boundaries. Her DAYS are plenty, and plenty, it would seem, enough.

Posted by rob mclennan at 8:31 AM
Labels: belladonna, Simone Kearney