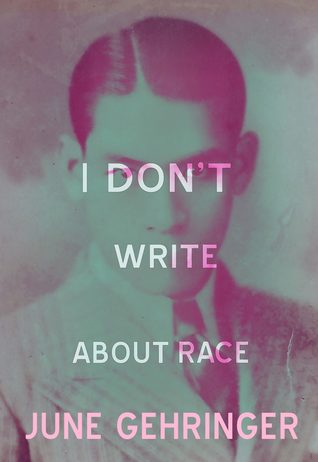 Some of these books I’ve been carrying around and flipping through for months, writing up notes so long ago I can’t even find those notes anymore. But I wanted to at least get something writ up to acknowledge, so there are some short-form reviews:

I’m behind on everything (as is everyone else, I know), but I’m finally sitting down to write up my notes on New Orleans poet and editor June Gehringer’s full-length I Don’t Write About Race (Civil Coping Mechanisms, 2018). Self-described as “a mixed Chinese trans woman who is somehow still alive,” Gehringer is the co-founder of Tenderness Lit and author of I love you it looks like rain (Be About It, 2017) and EVERYONE IS A BIG BUG TO SOMEONE (self-published, 2017). Through the lyrics of I Don’t Write About Race, Gehringer writes about attempting to simply be healthy, human and self-accepting in her body, writing out the external complications and bullshit of gender, race and sexuality. “the physicists have informed me that the universe is curved, / parallel lines do not exist. // it’s 2017. / none of y’all are straight.” There is an openness to these lyrics, a generosity and an exhaustion at having to cover the same ground for the sake of cultural push-back. These are poems of survival and intimacy, of searching, reaching and becoming. “Anxiety is a house where I live with my hot amazing friends,” she writes. “Hello, / Welcome to my house. // I live here with my hot amazing friends. // We don’t go outside.”

I read one ignorant tweet and I think about it all day.

I don’t care about gender,
I just wanna dress how I want,
fuck who I want,
and take drugs.

whenever someone was being a dick in the seventh grade,
they’d say:
“it’s a free country”,
and I think the principle holds true. 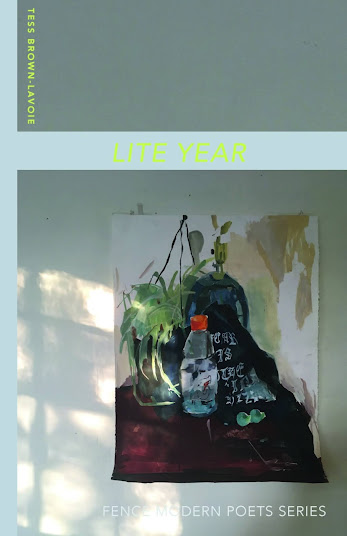 Providence, Rhode Island poet and farmer Tess Brown-Lavoie’s full-length debut is LITE YEAR (NY: Fence Books, 2019), published as part of the “Fence Modern Poets Series.” LITE YEAR writes as extended suites of lyric, epistolary prose through the agricultural year: a rhythm of seasons and weather and rural movement. There is such music through Brown-Lavoie’s prose, a long flow of sentences that stretch out the length of accumulated days. “Literature approaches desperation,” she writes, to open the piece “OXBOW LAKE,” “with the same emotional resonance as harmony in an acoustically perfect church— your favorite vowel sound to speak or sing.” There is also something quite compelling through her lyrics-as-journal, writing out her days and her hopes and her loves through the day-to-day mechanics of moving through agricultural labour, reading and thinking, all composed with such an open heart. She writes, as much as anything else, against the very volume of silence, and the blank page. “My heart is not so surrounded by lungs and bones but by the space and time through which you never wrote back. The brass I pour around it forms an instrument. Toot along sweet demon. My whole horn section is the lack of You.”

Our mutual delay is a predictable let down. I thought of you in the lap pool, and in the field today as my fingers snapped each tomato plant’s aspirational shoot. A virtual sticky note updates. It has been six or seven intentions toward you. They dissipate in negligence through hours of labor and corporeal demands.

Mine is a classic spring brain now: clarity of day usurped by dull night—a natural, sad cave. I get home, boil potatoes, brush my teeth, and oil my boots.

Your emails are a pleasure to read. I get the same feeling from a fine book or my sister’s poem written in secret language, the key to which is generously shared. I had a thought for you— really for you— like the firecracker that zips and then pops off. Underneath the crackling residue the sky darkens. I swear my firecrackers were loud as the backyard shows off Elmwood in July. The ensuing silence congruently vast. I don’t know what to say.

I like your email because it casts the shadow of your interior shape. From your writing, I know something of your breakfast recipe, your subway way, your worry scape, and probably even your intimate style, to be lewd/direct.

Writing you reveals distance even as it is my most personal work. Abstraction on my end always indicates a failure. I know I’ll never reach you. From the swimsuit of my poem habit. Don’t blame anybody. It’s just the nature of email: disorganized, and stewed in filial pain. 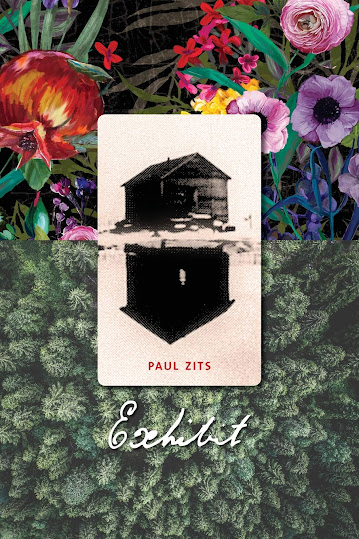 Edmonton poet Paul Zits’ third collection is Exhibit (Calgary AB: University of Calgary Press, 2019), following Massacre Street (University of Alberta Press, 2013) [see my review of such here] and Leap-seconds (Insomniac Press, 2017). I’m frustrated in that I don’t even think I saw a copy of that second collection, and only received a copy of this latest collection a few months back; why is Paul Zits so silent on these books he’s been publishing? As the back cover to this new collection offers: “In the winter of 1926, Margaret McPhail went on trial for the murder of Alex, and throughout, maintained her innocence. More than a retelling of her trial, Exhibit chronicles the path to a verdict, misstep by misstep. Unique and rewarding, this is a masterful work of collage poetry that rests in the spaces where reality is constructed and where reality is blurred.” I’m immediately fascinated at Zits’ exploration of the prairie document, retelling the bones of a story of early prairie history through the shape of poetry, putting him in a lineage of multiple prairie writers such as Dennis Cooley, Monty Reid, Robert Kroetsch and Kristjana Gunners, among others. Zits applies the elements of the story into short, sketched lyrics, presenting and capturing moments that accumulate and shape into a larger narrative of what might, or may, have happened. He writes out the spaces amid the spaces; what is known and impossible to know. Unlike Kroetsch or Cooley, Zits’ collage-story attempts the impossibility of truth, even through the knowledge of that impossibility. His lyrics present with the facts as best as possible, allowing the reader the space to get inside.

Leaves on the ends

leaves on the ends.

the arms grow disproportionately long and make contact with the

world about them they are formed like organs of perception the

hands flashing out rays the hands ending in whirls.