Carrie Olivia Adams, Be the thing of memory

When a material, namely miserable, muffled-up. In November, I sent it to my harm. I was often astonished and could not understand why, corrected or destroyed, I used to be delighted. Sometimes, a request or a gram would be sent to substitute. My whole became instance, frequent repetitions of the same wooden point. Sometimes, my remarks explain my clumsy afterwards. (“Daughter of a Tree Farm”) 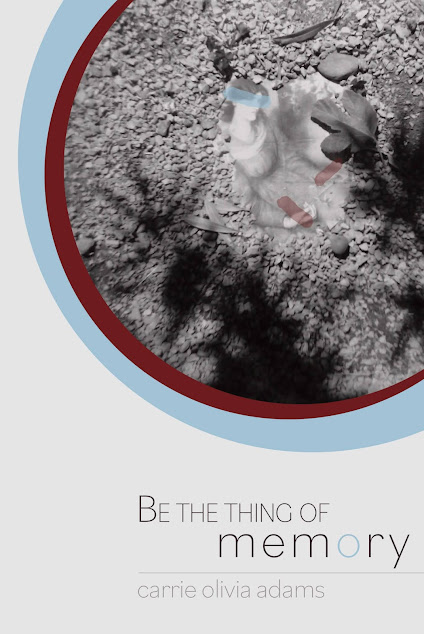 Chicago poet and editor Carrie Olivia Adams’s latest, Be the thing of memory (Flagstaff AZ/Las Vegas NV: Tolsun Books, 2021), is composed as a book of responses: the first section, “Daughter of a Tree Farm” is “Drawn from erasures of the Autobiography of Countess Tolstoy (1922)”; the second section, “The Pain Reliever,” is “Based upon the writings of Sarah Hackett Stevenson and Alice Magaw, ‘The Mother of Anesthesia,’ and days spent amid the collections of the International Museum of Surgical Science”; the third section, “R-SPIN: A Collaboration for Music & Dance” is subtitled “(The Revised Speech Perception in Noise Test)”; and the fourth and final section, “Proficiency Badges” is “Inspired by the Girl Scout Handbook: Immediate Program (1947).” Following her poetry books Intervening Absence (Ahsahta Press 2009) [see my review of such here], Forty-One Jane Doe’s (book and DVD, Ahsahta 2013) [see my review of such here] and Operating Theater (Buffalo NY: Noctuary Press, 2015) [see my review of such here], Be the thing of memory is constructed as a quartet of lyric suites, three of which are built as suites of prose poems, that write of movement and the body; a lyric of listening and response that even opens into elements of ekphrasis or translation. It is a book of research, something she discusses as part of a recent interview over at poetry mini interviews: “I have a notebook in my mind where I record words and phrases that roll around my thoughts and trip me up in dreams. And I have a notebook on my desk and numerous Google docs of half starts, half middles, half ends. But, in the end, I think I approach a poem similar to how a novelist might approach a story—with research. I am constantly drawn to found text, the work of the archivist, the archaeologist, and the translator.  I get curious about a subject or an idea—medicine, architecture, choreography, cave dwellers, girl scouts—and then I let myself go down the rabbit hole collecting scraps of language, facts, and points of view along the way. And then there’s a vibration or a slow burning fire, and I know the connection has been made between this other world of ideas and my own syntax. Then, I know, it’s beginning.” As she writes as part of the final section:

All paths lead to the body. It is a handbook, which is not to say that it is the only reference, reverent we know. We take instruction lightly. We light pilot lights in other’s stoves. I am not a girl you can construct from marginalia or from ghosts that find in your sleep. I burned the books. Tore out their pages and threw them in random dumpsters in the city. Pockets full of lockets emptied one by one. I donated them, gave them up, gave them over. Words can’t give a blind man sight.

In Be the thing of memory, Adams utilizes the bare bones of research as her means with which to propel outward, writing her lyric explorations through multiple contradictions. Her lyric suites are akin to field reports, composed after a return from gathering information, attempting to wrestle the knowledge gained into a readable shape. It suggests her work simultaneously process and project based, aiming both for how she gets there, and what she has discovered. Field Commander Adams, just where might you venture next? We look forward to your next report. As she writes as part of the first section:

When children can no longer devote sympathy, owing to their growing up. One mind is always engaged or found with labor in order to be. Later on the trees acquired winter. Sent and took and did not go out. The weight of never shedding. We anticipated a cure if it comes willingly. We were unable to carry out nature. Those impressions, fresh, often made me see his life previous, the principal sadness I had to recognize.

We planted trees. We cleared the pond. Gathered different, undisturbed faith. Gradually the steps further and further withdrawing over the hills, beyond the fencerow. I was too weak. I was often driven, but saw no way. I would never go back.

The difference, between us, not because I remained the same, unable to unalter, but taken from the midst, rarely clouded, and the broken. It was this, which woke me open, opened to an outsider, a stranger.