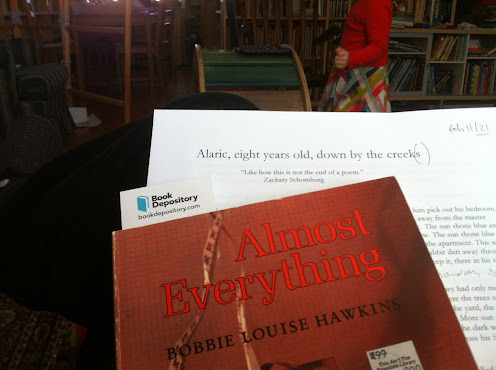 Anyone paying attention already knows that I’m always starting up some ridiculous scheme or another (see also: On writing, the Tuesday poem, National Poetry Month, 12 or 20 (second series) questions, my (small press) writing day, many gendered mothers, G U E S T [a journal of guest editors], Touch the Donkey, Forty Proper Tales, Six Questions, the ottawa small press book fair : 2020 home edition or anything I’ve been cooking up at periodicities: a journal of poetry and poetics, or even above/ground press, which turns twenty-eight years old in July), but near the end of summer 2019, I started another new series of essays ("Talking Poetics") on the ottawa poetry newsletter blog, soliciting poets to see if they might be interested in talking about the nuts and bolts of writing. I asked questions such as: How does a poem get started? Has that changed over time? Do you begin with a loose structure, a phrase or a word, or the kernel of an idea? Are you prompted by the work of other poets, or, say, something you read in a newspaper? Do you start at the beginning, somewhere in the middle, or work from a scattering of notebook entries? Do you utilize notebooks, and how does that help? How are line-breaks (or the choice to ignore them) chosen? Etcetera. Maybe even focusing on recent threads in your work, or even a recent (and/or recently published) poem? Are there other writers at the back of your head as you work? I had originally considered the project to be one exclusive to Ottawa-area writers, but of course, the project took on a life of it's own, and progressed a bit further than that.
I like hearing how different writers consider structuring poems, and the decision-making processes that go into poems starting, continuing and going further. So far the series has included thirty-four short pieces: Sanita Fejzić, Amish Trivedi, Amanda Earl, Gil McElroy, Sonia Saikaley, Rusty Priske, Pearl Pirie, Dale Tracy, Barâa Arar, Jean Van Loon, Sarah Kabamba, Lydia Unsworth, Michael Blouin, Mary Kasimor, Eric Baus, Kate Siklosi, RM Vaughan, émilie kneifel, ryan fitzpatrick, Ashley-Elisabeth Best, Cody-Rose Clevidence, Jami Macarty, Conyer Clayton, Misha Solomon, Derek Beaulieu, Genevieve Kaplan, Jeff Alessandrelli, Dina Del Bucchia, Chris Banks, Valerie Coulton, Stephen Collis, Rose Maloukis, Johannes Göransson, Juliet Cook, Michael Edwards, Nathanael O'Reilly, Courtney Bates-Hardy, Claudia Coutu Radmore and Michael Lithgow, with a further piece forthcoming by Jack Jung. What else might happen?
Posted by rob mclennan at 8:31 AM
Labels: Talking Poetics