The Great Solar Flare of April 16/17, 2202 made the world into a very different place. The course of Earth’s future was unexpectedly and inexplicably altered when the sun produced an enormous and long-lasting flare accompanied by a Coronal Mass Ejection (CME). The flare knocked out observatories and blocked out communications systems, but that was only a taste of what was coming when the CME hit a few hours later. Satellites fell from the sky and the solar particles were so intense that auroras lit up the atmosphere all the way to the equator. The light show would have been beautiful if not for the accompanying chaos, and then the stillness. Along with the destruction of electronic systems and devices, nearly the entire population of Robots and Cyborgs were lost.
The goal of this anthology is to preserve and remember the Cyborg poets. An entire generation has grown up since the flare, and many have never heard of the great Cyborgs of the recent past. The 0ne World Movement and the Via Wasat Media political party were founded by Cyborgs and helped shape the planet into a more compassionate and equitable place. The fashion, music, art, and media created by Cyborgs were some of the most dynamic and renowned in history. And the poetry! (“Preface”) 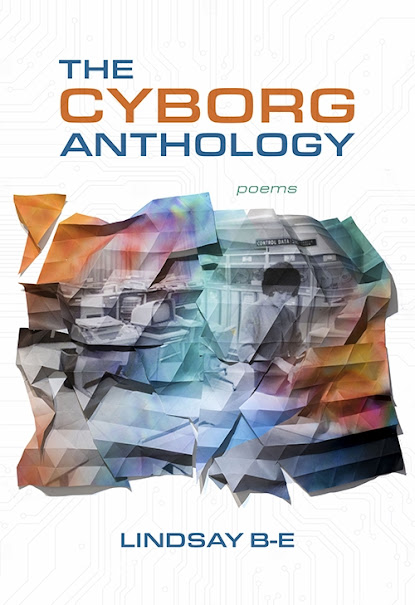 I’m fascinated by the full-length debut by Toronto poet and filmmaker Lindsay B-e, The Cyborg Anthology: Poems (Kingston ON: Brick Books, 2020), an anthology shaped around speculative fiction, exploring ideas of consciousness, being, artificial intelligence and technology. The Cyborg Anthology: Poems examines a potential future involving the rise and fall of cyborgs, and an acknowledgement of their literatures. Opening with the two authors of the “Early Cyborg Poems” section, the book is structured with a trio of Cyborg poets in each of the successive sections: “The Rise of the Cyborg Poets,” “Poetry and Politics,” “Celebrity Cyborgs – The Golden Age,” “Pop Culture Poets” and “Cyborg Poetics – The Next Generation.” And why wouldn’t future potential cyborgs be poets? It is reminiscent slightly of the android Lieutenant Data attempting to paint in Star Trek:The Next Generation (1987-1994), or even the robot soap-opera of Matt Groening’s animated sitcom Futurama (1999-2003, 2008-2013): All My Circuits, starring Calculon. “I live in this body,” Theseus (2125-2202) writes in “Everybody Else Has the Stomach Flu,” “but I don’t know it that well. // I don’t even know if this poem will end / with a rejection of my inheritance // or a mad dash down the hall / to spill my contents / into an open receptacle / with a well-defined inside / and outside.” The structure of layered fictions is also reminiscent of Robert Kroetsch’s The Hornbooks of Rita K (Edmonton AB: University of Alberta Press, 2001), as Kroetsch wrote a narrator who discovered and explored the lost poems of a lost author. B-e writes seventeen different speculative Cyborg poets, all of which are included with author biographies, including Patterson Armitage (2099-2191), who “composed a series of poems that were published in a short volume called Doodles. Each page contained a concrete poem that was drawn with his printing tool fingers.” Another is Mi’La Palpetit (2204-), “one of the few new Cyborg poets of this generation. She sports a set of ornately-carved wooden mechanical arms and legs. Born after the flare, Lalpetiti was raised next door to a small-town library in Nunavut and spent her childhood and youth absorbing the contents of the books. Her parents were members of the Ministry of Urban Rebuilding and would often take their children with them as they travelled.”

The strength and the push of this collection is clearly an exploration of the politics and social nuances around being and the body, consciousness and artificial intelligence, utilizing the boundaries of what is beyond contemporary considerations of “humanity” to explore larger ideas. Again, one could point to other examples in media including Spock, Data or the Doctor from a variety of series’ in the Star Trek franchise, or even more recently, through Machine Man and Jacosta through the Iron Man comics. “the body is / le, a temp / est, a temp / orary, temp,” Matriarch Doe (2102-2202) writes, to open “Hail Mary.,” a poem dedicated “(for Jean-Luc Godard and the Twilight Sleep birthers).” The future B-e writes is one that looks back across a dark period, attempting to acknowledge and grieve the significant losses of Cyborg life and culture, and seek out new possibilities into a more positive way forward. Given Lindsay B-e’s focus on subject, seemingly, also means that there isn’t much in the way of exploration in language or structure: one might suggest this assemblage is, in the end, a fairly conventional assemblage of predominantly first-person lyrics; much of B-e’s Cyborg poets’ work lean towards the meditative lyric, allowing for slightly variety in a spoken word poet, and another more attuned to the visual. Part of me would have been interested in seeing some kind of language or structural experimentation and speculation on B-e’s part, given how far in the future this work is meant to consider. This is meant to be so far into the future; would writing, even poetry, itself not have progressed? Although I will allow that such might have been outside the point of the project. Otherwise, the book is daring for its originality, and the scope of the field that B-e has established, writing out an anthology of voices each attempting to capture the essence of what it means to exist from a variety of directions and perspectives. As Clark Jones-Smith (2184-) writes:

I ate a bug
on purpose

to become
and crawl

but instead I found
that the lesson

wasn’t in eating
but in manufacturing

a purpose
if only to crawl

Woah -small world!!! I am taking a creative writing class with Lindsay B-e!!! Thanks for this review. Looks very compelling.