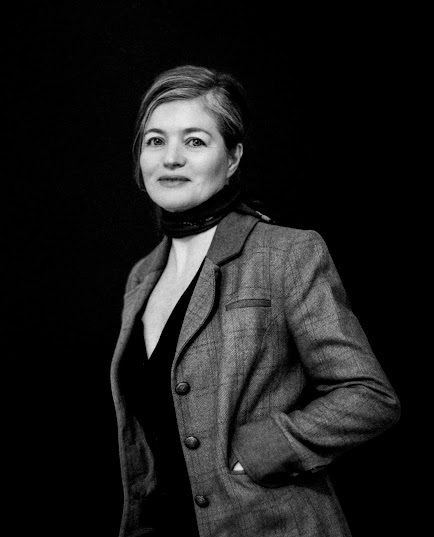 Siobhan Jamison [photo credit: Alejandro Collados-Núñez] was born in Manchester to parents from Northern Ireland. She spent the 90’s living between Paris and Dublin but grew up in Toronto, where she currently resides and teaches at Seneca College. She is a graduate of The School of Creative Writing at The University of Toronto and is pursuing an MA in Creative Writing at the University of Hull in the UK. Her work has been longlisted for the CBC Poetry Prize. Maternity and Other Corsets, a semi-autobiographical novel about chasing the bohemian dream through Europe with an alcoholic French painter and the child she must later raise on her own, is her first book. She is currently writing its follow up Frozen Meat on Hooks.

This book has all of me and involves a personal Trojan War of sorts. The Trojan Horse was realizing the dream was doing me in and that I didn’t need the French painter or even a life in Paris to find art. The creative space is precious and illusive but can be found anywhere. Stil tapping into it with deliberation required getting the house in order: emotions, needs, finances. I feel spent but taller, exhilarated but calm.

I wrote poems as a child and through high school. It was almost religious! Real life was a kick in the head though. And my first prose experience didn’t happen till a holiday in Southampton when I was 38. I don’t know why it took so long but credit the miracle that is Lake Huron for setting me straight.

When it comes to writing, I’m the tortoise! The book took thirty years to live, ten to digest and ten to write. Fragments, on what role my own stupidity and that of society have played in what transpired, were scribbled in all kinds of notebooks. At the beginning, one problem was planning the narrative structure and finding the right tone. In the early drafts, there were aspects - like the domestic abuse component - that I had almost breezed over. There was the temptation, initially, to gloss up the story or pretend it didn't hurt because I was determined not to give in to self-pity.

I had a novel in mind from the get go but it took an eternity to figure out. In the first draft, the action was stuffed into chapters, shaped around the places I had lived in - Prague, Greece, Spain, Ireland and Paris. Each chapter had its own shift, landscape and dilemma. I even assigned them pieces of music and literature. I had a character arc but the story itself was a too tightly woven, criss-crossing mess and then came the long process of cutting and gently untangling things, of working scene by scene, moment by moment.

I’m shy but I do like readings. The close little room, people listening in hushed tones sipping their beers and jangling their curry plates. And, you meet people as well. Through recitation, I feel you can pick up a lot about where things are working or not. Flaubert was famous for reading his work aloud to himself and I do think this helps a writer elevate the words from the page.

Sure! The book is among many things an unabashed testament to why socialistic policies work. The Mairie de Paris took care of my daughter and I - rent subsidies, free daycare with hot lunch, cash handouts - who knows where we would be without them. Destiny and choices are another theme. Where success comes from and why we do what we do? There’s parenting, in there too, and why society doesn’t do more to help. So many kids get left behind and parents can lose themselves in the process. Then there’s the patriarchy and the weight of being a woman or what Simone de Beauvoir calls the “other”. What is ‘woman’? Why has she seemingly contributed so little to history and art? Why is she worshipped, mystified, hit, killed, held back and pinned up naked but so little understood even to herself.

There is nothing like following the voice of a writer through the pages of a book. It instills empathy and opens the mind to a myriad of perspectives and ways of seeing the world. The kind of writers I most admire have a balance of original style, voice, story and moral or social purpose. But writers come in all shapes and should I think hold true to themselves and their vision and be wary of trying to fit into any kind of a box.

Absolutely essential! Editors and mentors, instructors, writers groups, friends, loved ones, help tremendously and even the most innocuous comments have kept me going. That said, when it comes down to it, you are alone with your pages and it’s up to you to get them right.

As a workshop exercise, Erika de Vasoncelos told us to write badly and deliberately so. Strangely, this freed me from my own perfectionism and is something I repeat to myself in dark times and something I even have a lot of fun with when I get too precious.

I’ve written a novel that is disguised and/or distorted non-fiction and I’ve tried to use poetry while writing it, so for me the forms run into each other.

I’m on academic leave this year from teaching at Seneca College and I’ve spent most afternoons writing this summer on my porch. It’s been a glorious luxury! I wrote the first draft of Maternity while on academic leave eight years ago. We all should be given sabbaticals. When I go back to teaching, it will be scraps of time here, there and nowhere. I gave up yoga, most socializing and walks to finish my book. My house was a mess and I gained twenty pounds.

That’s a complicated question. My writing was stalled most of my life. Lack of confidence and being bogged down in work and mummy duties contributed. But there was also a blank fear that I didn’t have it in me … that no woman did. Now, I’m happy to report a good night’s sleep, a walk and a healthy meal usually sets me straight.

Home is kind of an enigma but a whiff of sea would be it almost anywhere and I hope to find a piece of that soon.

I think that’s very true and Toni Morrison talks about how you need to write the book you want to read but can’t find. And that frustration is certainly something that gave me an extra push. But I would also say that just about everything you experience influences you. A life well-lived shall we say is key - be it in on the high seas like Joseph Conrad or on the Yorkshire heaths like Emily Brontë.

Emily Dickinson, James Joyce and Toni Morrison are the writers that have and do most inspire. I love the vitality, courage and play with language that happens in the work of these writers. Dickinson is such an oddball but was, I think, having a bit of a laugh in her white dress. Joyce is the great humanist and has a way of elevating the banal everyday quirks that mark us and Morrison gives pain more fierce poetry than anyone.

Well, I’m greedy! One life is enough as long as I get to stuff three lives in there. I spent the 90’s in Paris and Dublin, learning bad french and the Dublin vernacular and I would love to live somewhere again - say Italy and learn Italian and then maybe somewhere in China.

I’m not sure I can. I’ve spent my whole life living the gists of a book or two and then writing them. And in my next lifetime, I’d just like to sit perched up on a grassy slope by the water somewhere.

There was no getting rid of the words in my head.

Sheila Heti’s How Should A Person Be and Elena Ferrante’s Days of Abandonment were both great reads. At the moment, I’m slowly making my way through Lisa Robertson’s The Baudelaire Fractal and am mesmerized. Every single sentence is a conundrum you nod at with inexplicable understanding. Over the winter, I watched the films of Lina Vertmuller and love her examinations of social class, survival and desperation. I loved this year's Oscar winner Parasite for the same reason. I saw Portrait of a Lady on Fire a few weeks ago and appreciate how the lady found a way to conduct her own portraits.

A follow up novel called Frozen Meat on Hooks. Unlike its predecessor, which is about running away and follows its heroine Maebh through six different countries, this book is about settling down and takes place in four or five houses in Toronto. Maebh knows her sins but not why she can’t escape them.

Posted by rob mclennan at 8:31 AM
Labels: 12 or 20 questions, Quattro Books, Siobhan Jamison