Gregory Crosby, Said No One Ever

To turn language into a hat upon
a table, & to lift it, revealing

neither the head nor tail of a coin,
but a solid block of ice. A miracle

of rare device. The endless hours of
patience, practice. The rabbit,

twitching in darkness, waiting
to be pulled into the light.

The one who never reveals the secret.
When is the poet? During the moment

I’ll tell you in just a minute,
but first: pick a card. Any card. 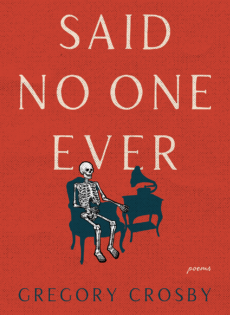 New York City poet Gregory Crosby’s second full-length poetry collection is Said No One Ever (Brooklyn NY: Brooklyn Arts Press, 2020), following on the heels of Walking Away from Explosions in Slow Motion (The Operating System, 2018), and the chapbooks Spooky Action at a Distance (The Operating System, 2014) and The Book of Thirteen (Yes Poetry, 2016). Crosby’s deceptively straightforward lyric narratives provide original takes and insights into familiar pop culture subject matter, writing out film and comic book characters with a freshness and sequence of twists that routinely subvert and rejuvenate. “Everything fades except its representation.” he writes, to open the poem “Lewis Avenue.” “I’m a river of gin flowing in search of a still, sour ocean of tonic. / Someone is asleep on the long shot.” Crosby’s lyrics are fiercely smart and self-aware, playing with image and entertainment culture through lines both subtle and striking in their originality, allowing for a quiet, strange humour and series of odd twists. “Hopelessness is a luxury.” he writes, to open “April, Fool.” “The day / I bought you violence for your furs I fell / completely, thrown under the omnibus.” The humour through Crosby’s poems are sly, less absurd than, say, Stuart Ross or Gary Barwin, but one that allows the slyness as one of the mechanisms that drives each poem forward. As he responds as part of a recent interview posted at The Rappahannock Review:

I have a weakness for odd or wacky titles that create some sort of expectation that the poem itself subverts, or that simply function as “grabbers.” I consider titles to be part of the poem as a whole, and I often write poems around a phrase that sounds like a good title; I have a very old and very long Word document filled with nothing but potential poem titles, which I turn to whenever a prompt is needed. “She Went Into the Lobby for a Box of Junior Mints” is, of course, a line from the Hüsker Dü song “Merry Eiffel Tower High” (from their 1986 album Candy Apple Grey). The preceding line is “She went into the movies/She’s been there ever since,” and recently, while sitting in a theater waiting for the film to start, I made the mistake of actually reading the ingredients on a box of Junior Mints and discovering that sugar came first, long before either chocolate or mint. I have, as many of us do, a complicated relationship to sugar, particularly with the history behind it; the poem is the result of thinking about those complications. Since that Hüsker Dü lyric always pops into my head whenever I’m at the movies, it was a short step to realizing that it would be a highly appropriate, allusive title for the poem I had in mind.