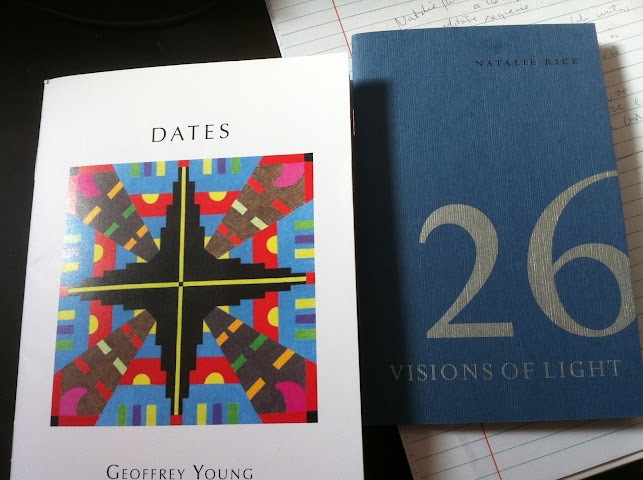 Kelowna BC/ Kentville NS: I’ve been enjoying Kelowna BC poet Natalie Rice’s (seeming) chapbook debut (I say seeming, because I can’t seem to find much information on her at all online), 26 Visions of Light (Gaspereau Press, 2020), a work subtitled “After Hildegard von Bingen’s illustrated work ‘Scivias’.” A meditative sequence of twenty-six short lyrics, I enjoy the flow of Rice’s lines, the way her sentences stretch and flow like water.

Sometimes, when I open the kitchen window
heaven falls into my lap, there is no orchestra here,
only the rubbing of sinews, gristle on bone,
everything is holy, the meat, the maggot, white budding
of bread, the stew is made,
my mother waters a river, I’m brimming
with desire

Hildegard von Bingen (1098 – 17 September 1179), “also known as Saint Hildegard and the Sibyl of the Rhine, was a German Benedictine abbess.” According to Wikipedia, “Scivias is an illustrated work by Hildegard von Bingen, completed in 1151 or 1152, describing 26 religious visions she experienced. It is the first of three works that she wrote describing her visions, the others being Liber vitae meritorum and De operatione Dei (also known as Liber divinorum operum). The title comes from the Latin phrase ‘Sci vias Domini’ (‘Know the Ways of the Lord’). The book is illustrated by 35 miniature illustrations, more than that are included in her two later books of visions.” I would be curious to know if Rice’s poems exist as responses, or condensed adaptations of the original work (or some combination of the two, perhaps); or even if further sequences by Rice, responding to the other two works in the trilogy, are in the works or have already been composed. I’m curious to see more of Rice’s work; to see what else she might be capable of, across the lyric.

There is something holy
in the compost heap, a glimmer
of heat rising—I see cloven tongues
like fire, deep and warm
and from it, the one long life-line of
zucchini tendril

Great Barrington MA: Geoffrey Young [see an interview I did with him a while back here] was good enough to send along a copy of his DATES (Great Barrington MA: YOUR GARDEN VARIETY, 2021), a collection of short prose reminiscences. In nineteen short sketches, Young writes out interactions he’s had with well known literary and otherwise figures over the years, including Gabrielle Buffet Picabia, Richard Pryor, Samuel Beckett, Kathy Acker, Jimmy Read, John Cage, Picasso, Charles Bukowski, James Baldwin, James Schuyler and others. His pieces are informal, pointed, curious. “But the better question was,” he writes, as part of his piece on Richard Pryor, “what was Richard Pryor doing in a country store on the tip of Maui wearing a baseball hat with wings? Vacationing? No doubt. Cleaning up his act? Quite possibly. Later I heard he owned a house out there.” The memoir-esque short sketches are reminiscent of Guy Birchard’s above/gound press chapbook VALEDICTIONS: Three essays by Guy Birchard (2019), in which he wrote on William Hawkins, Ray (“Condo”) Tremblay and Artie Gold, or even George Bowering’s suite of short memoir pieces on his late friend, London, Ontario painter Greg Curnoe, The Moustache (Toronto ON: Coach House Press, 1993). Young’s pieces are charming, densely-written, suggesting just enough to leave open. I am curious to know if there are more of these, if there might be a book’s worth of such possible, at some point.

After supper at home on the Rue Bréa we walk a few blocks to the Closerie des Lilas on the Blvd Montparnasse for dessert. Laura’s a couple months pregnant with Clovis, and she orders a profiterole. In a separate room, not twenty-five feet in front of us, we see Samuel Beckett with an elderly couple, nursing a drink. Seated at a small round table, Beckett’s angular profile is a dead giveaway. He’s with white-haired friends, Irish most likely, late 1973. In his right hand he is squeezing a small rubber ball, over and over.
Getting up to leave, Beckett passes our table by the exit, and I stand up, my right hand extended to shake his, and say, “Call that going.” He looks twice at me, thinks I’ve said, “How’s it going?” says “Fine,” and I say, “Your work has given us long and dangerous pleasure,” as we shake hands.
Kindly, he thanks us then, his grey hair upright, his blue-grey eyes reserved, his shyness genuine, a scarf around his neck, his concern to leave paramount, with only a momentary, delicate embarrassment on his face.