The idea of putting together a magazine was fomented in 1985 by Adeena’s professor and mentor Warren Tallman, wire-thin, vodka-soaked-djinn, releaser of spells, opener of floodgates, who had done the same a generation earlier, inspiring our Vancouver-based poetic predecessors to start the literary magazine TISH. Warren organized a soiree at the Powell Street loft of Gerry Gilbert, where a coterie of local poets came and contributed names and mailing addresses to our cause. We knew enough to be awestruck by their generosity. We were a cluster of energetic contradictions. We were students of literature but we kept our literary lives distinct from our scholastic ones. When these worlds did cross over, when we rejected bad poems by a bad prof, grades took a hit—a conflict of disinterest. But there were those among the university faculty who saw in us a poetic spark, respected and kindled it, like Peter Quartermain who took us deeply into Pound, Zukofsky, Stein, the L=A=N=G=U=A=G=E poets, and George McWhirter, then Head of Creative Writing, who gave us space in his coveted poetry workshop class, where my experiments with cut-ups and procedural texts met with very reserved responses from his students, but not from George, whose generosity included giving us all the goldenrod, salmon-pink, and canary yellow reams of paper we could handle once we’d gotten the secondhand tabletop offset AB Dick printing press set up and running, churning out copies. (Kedrick James, “The Mag-nificent Anerkids”) 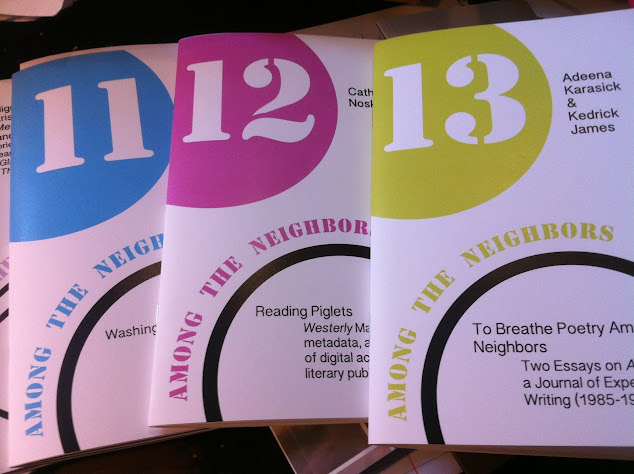 I’m absolutely floored to realize I’ve been missing out on a whole series of critical publications on small press endeavors (Derek Beaulieu did bring it up a while back, but I hadn’t gone to explore any of it), the “Among the Neighbors” chapbook series curated by Edric Mesmer, “a pamphlet series for the study of Little Magazines,” run through The Poetry Collection of the University Libraries, University at Buffalo. The chapbooks that Mesmer was good enough to send along include Derek Beaulieu’s “TISH – Another ‘Sense of Things’” (#3, 2017), Tim Wright’s “Migrating Ears: Kris Hemensley’s The Merri Creek, Or, Nero and H/EAR, with some brief comments on the earlier publications Our Glass, Earth Ship, and The Ear in a Wheatfield” (#7, 2019), Tina Darragh’s “Washington, DC Poetry—Mass Transit and Folio Books Reading Series” (#11, 2020), Catherine Noske’s “Reading Piglets: Westerly Magazine, metadata, and the play of digital access to literary publication” (#12, 2020) and Adeena Karasick and Kedrick James’ “To Breathe Poetry Among the Neighbors: Two Essays on Anerca, a Journal of Experimental Writing (1985-1990)” (#13, 2020). What appeals in these publications is not simply the critical and conversational exploration of small press, but a recording and documentation of journals that might otherwise have simply disappeared into the ether of history—I’m struck, for example, to learn that Adeena Karasick and Kedrick James produced a small journal for half a decade, and I hadn’t heard a peep about it prior to this. It reminds of when I was gifted various bins of the late Ottawa poet Jane Jordan’s extensive library a few years back, and discovered numerous Ottawa-based literary journals and presses from the 1970s and 80s I had never even heard of [see my post on such here].

Since mid-2016, Westerly has been engaged in a project of digital development. The production of the digital format of the print magazine and the OSIs [Online Special Issues] has been a central aspect of this, extending Westerly’s scope in publication, opening it to the discipline in enabling greater research access, and opening new spaces for work from emerging authors and guest editors. More lately, digital development has been focused specifically on extending the function and capabilities of our digital archive, a complete digital backset of the magazine’s sixty-three years of publication. This development has required playful thinking in several domains, the input of several people, and some innovation. The “disposition of playfulness” and a “sense of permeability” are both qualities which have been fostered within the editorial team as a means of supporting the work involved and enhancing the publishing outcomes. Also, indeterminacy—both in play and as play—has become integral to our thinking: both within this process, especially in the development of the digital archive; and in understanding the function of the magazine in itself, as a live ecology of writing, reading, and thinking. (Catherine Noske, “Prologue”)

Others in the series include “Poetry in the Making: A Bibliography of Publications by Graduate Students in the Poetics Program, University at Buffalo, 1991-2016” by James Maynard (#1), “In Search of Blew: An Eventual Index of Blewointment Magazine 1963-1977” by Gregory Betts, “Skanky Possum Press: A (Personal) Genealogy” by Dale Smith (#4), “A Commentary on El Corno Emplumado/The Plumed Horn” by Sergio Mondragón, translated with an additional commentary by Margaret Randall (#5), “A Bibliography of John Bennett’s Vagabond Press, 1966-2005” by Christopher Harter (#6), “Editing O.ARS, 1981-1993” by Donald Wellman (#8), “Cultural Shape-Shifters: Cartonera Publishers” by Ksenija Bilbija (#9) and “Teaching the Little Magazine” by Michael Leong (#10). It is an impressive list of acknowledgements, and the series is easily comparable to the stunning works recovered and produced through Lost & Found: The CUNY Poetics Document Initiative, or even my own wayward attempts with interviews and bibliographies of decades’ worth of Ottawa-area literary presses and publications, a project I’ve only recently begun to expand upon (more on that soon enough). I think this series is fantastic, and should wholeheartedly be supported; I am already curious to see what might be explored next (and, of course, I am thinking about how I might even be able to add to the conversation).

When we think of Washington, DC, we don’t think of poetry. Politics, of course, and scandals for sure. But poetry? In the 1970s and 1980s, poetry in DC expanded beyond academic endeavors and began to focus on social themes and the broader poetry community. In 1971, a once-a-week poetry reading called Mass Transit began at the Community Bookstore on P Street by Dupont Circle. The readings were organized by Michael Lally, Lee Lally, and Terence Winch. Readers sat on the floor and the rule was “if you can’t say something nice about the poem, don’t say anything at all.” The idea was that the Mass Transit readings were supposed to be the opposite of an academic workshop. The room was always packed, and the readers ranged from teenagers to elderly people. (Lally, “Introduction”) “There was a pervasive anti-establishment (government, church, middle class decorum) stance, anti-straight.” (Retallack, “About Mass Transit”)

There was also a small journal called Mass Transit, and people switched off being the editors. There were five issues published from 1973 to 1974. (Tina Darragh)

As the back of each mention, “This pamphlet series seeks non-academic and academic contributions of 10-30 pages on the subject of little magazines, generally or on specific magazines, published from 1940 onward.” For further information on the series, please send queries to the series editor at esmesmer (at) buffalo (dot) edu