We Want It All: An Anthology of Radical Trans Poetics, Eds. Andrea Abi-Karam and Kay Gabriel

Set you down first:
acres of frost
then: acres of thaw

then: both of us
live under law.

You came up in a green land
shoulders high
over the sea.

I had some green men
to crow over me.

We will set it down
and make bread
and pay the rent:

neither one of us
will be president. (Liam O’Brien)

The project of the collection that follows is therefore a gamble of sorts. Can a poetics both ground itself in a particular social identity and speak expansively towards the present and its crises? Trans poetry has typically foregrounded the body, its uses and constraints, its uneven legibility, its relations to racial and colonial modes of categorization, its conscription into the wage and the working day; what else can this emphasis render into focus? How does a trans poetry translate itself across borders and languages, or account for the colonial conditions of its own emergence? What modes, beyond and together with agitprop, are capable of forcing an encounter between the ideal and the actual? 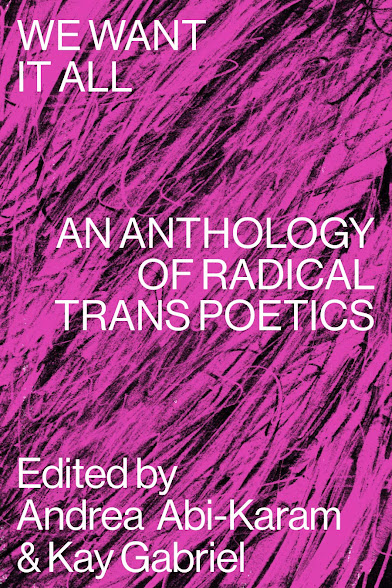 The poetics of this collection range from lyric to prose to experimental writing; from exposition, declaration, epistolary and love song to document, rocking a range of shattering effects, open possibilities, traumas and demands and open-hearted calls to immediate action. “Since I can’t mail you this letter,” the late Leslie Feinberg writes, near the end of “from Stone Butch Blues,” “I’ll send it to a place where they keep women’s memories safe. Maybe someday, passing through this big city, you will stop and read it. Maybe you won’t.” Elsewhere, as part of “i am really, truly in this / bitch poem,” Jimmy Cooper declares: “I’m here, I’m here, I’m here / I am inhabiting this body / I am really, truly in this bitch!”

There are some on this list I’ve been aware of prior. Cody-Rose Clevidence, Samuel Ace and Trish Salah, for example, have all appeared in the pages of Touch the Donkey; I’ve reviewed work by all of the same as well as Nora Fulton. Jamie Townsend has an above/ground press chapbook, with a new one forthcoming quite soon. I’ve interviewed Andrea Abi-Karam in my “12 or 20 questions” series. I’ve read some incredible work by CAConrad and Joshua Jennifer Espinoza, and am slowly working my way through both Aeon Ginsberg’s full-length debut and Maxe Crandall’s full-length debut. All of that to say, while I know some of the work of a handful of poets included in the anthology, the bulk of those included are completely and entirely new to me (given the amount of writers included, how could this not be true?). “a living-bruise,” as Faye Chevalier writes to open “fantasy football,” “a bent but dashing mask // in yr sandy hands, in the stony dark, /// time trailing the psycho-(sub)textual milieu // before a young Keanu Reeves // in the 1988 feature film Permanent Record, /// reason etc a mire-some snare, // wearing skin-for-bones as i am wont to— [.]”

What is interesting, also, is in realizing how many of the contributions are posthumous, allowing for an acknowledgment of important writers that might otherwise have passed into silence. And I know well enough that such volumes aren’t meant to be completist, but I do wonder at the absence of American poets Chase Berggrun and Jos Charles, both of whom have produced some absolutely stunning work (I’m fully aware that there are lots of potential reasons why certain contributors aren’t in any particular book, and most likely other absences I’m not aware of). And yet, a book such as this isn’t defined by impossible standards of “completeness,” but one of openness, inclusion and range, and the variety and range of perspectives and styles of this collection, beyond even its very volume, are stunning. Encompassing not just the United States but English-language writers from a multitude of other countries and backgrounds, this anthology is clearly impressive, and a foundational collection of exactly what it declares itself to be. If you are interested in where writing is going, or what conversations on writing you should be considering, We Want It All: An Anthology of Radical Trans Poetics is a book of endless possibilities.