woke to fog    a cremation dream    it is garbage day

Olson:     words made to taste    like accuracy    pincers
the king birds are back    an osprey shrieks

in the wooded swamp    ice reigns yet    first the school bus

despair is elitist    do not count pages   forget    the work 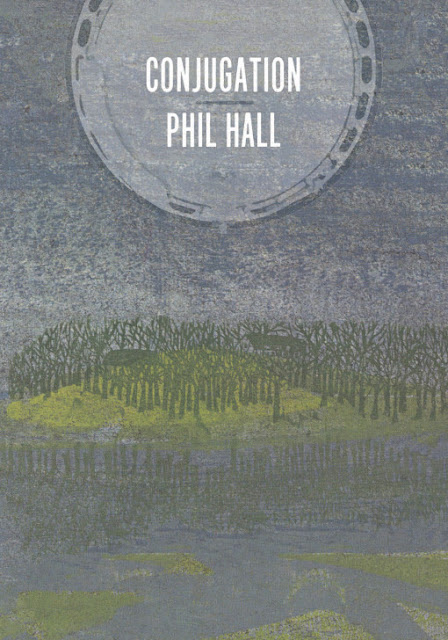 Perth, Ontario poet Phil Hall’s latest collection is Conjugation (Toronto ON: BookThug, 2016), a complex, engaged and expansive collection that continues his meditative explorations into the lyric fragment, collage, poetics and the deep self. “Conjugation,” according to one online source, is “the modification of a verb from its basic form,” and Hall’s poetry manages a deep and serious play in the way words are constructed, pulling apart the mechanics of language and how it interacts with ideas (a play that has, it would appear, deeply influenced the work of Ottawa poet Pearl Pirie). As he writes: “but there’s a fee / a fee that sees    & hears wonky // fe-ces   we’re were   subtler/fugues   etc [.]” Similar to Dennis Cooley, Hall engages the mis-heard word, the mis-step, and runs with it, managing to make connections where there otherwise might not have been.

Over the past few poetry collections, Hall has shifted from his more overt engagements with Ontario gothic/rural, including his own childhood and history of abuse, to a more overt engagement of multiples—poetics, “the prison of metaphor,” pulling apart the minutae of language, personal history, direct observations and his immediate environment (including the Ontario wilds of his Perth homestead)—each holding similar weight throughout, woven together as a precise, dense and thorough series of ongoing threads.

Constructed out of an opening poem, seven suite-sections and a coda, the short poem-fragments in Conjugation follow a similar tone and structure set in a number of Hall’s poetry collections (a recent example being the “selected poem” published by WLU Press; see my essay on ‘editing’ the selected here), and, as with much of his work, the poems within could be presented in a variety of orders. It becomes curious how an order built so carefully, with such precision, is also constructed to be opened at any page, and read in either direction. His poems are less narratives than a series of accumulations, and the order in which you interact with them might even bring you to an entirely different conclusion.

Hall has become known for his shuffling, reworking and reprising his work, giving the sense that his poems might be less “finished” than simply set in a particular way for a particular temporal, whether temporary or permanent, reason, including poems shuffled and re-set for the sake of a chapbook, a public performance or a trade collection. “Early versions,” as Hall himself writes in the acknowledgments, of elements of the first section, “Gap & Hum,” appear previously in his X (Thee Hellbox Press, 2013) [see my review of such here] and My Banjo & Tiny Drawings (Flat Singles Press, 2015) [see my review of such here]. The fifth section, “Essay on Legend,” was originally produced as a 2014 chapbook through Mark Goldstein’s Beautiful Outlaw Press (Goldstein is also designer of this current volume, as well as many of Hall’s recent trade collections). Cobbled and stitched together from a variety of threads, found and salvaged lines and objects, his “Essay on Legend” begins with an anecdote about a dog, utilizing such as a starting-point for a sequence of observations on poetry, anecdote and violence, each circling around the very idea of “legend.” The chapbook version was produced in an edition of 52 copies “in commemoration of the second annual Purdy Picnic at the A-frame, Roblin Lake, Ameliasburgh, July 26, 2014,” acknowledging the late poet Al Purdy as one of Phil Hall’s long-standing touchstones. At the Ottawa launch of the chapbook in 2014, Hall spoke of starting out as a good Ontario “son of Al Purdy” poet that slowly began shifting towards Louis Zukofsky’s 80 Flowers (1978); from stories and the anecdote to “that purse sound of the vowel.”