The theoretical physicist says, “I’ve always wanted to find the rules that governed everything.”

I have a friend who asks about “truth” in poetry. Whenever he does, I want to send him a valentine on musty pink paper. He lives in a Mid-Century modern house with Mid-Century modern furniture carefully culled from vintage stores and eBay. He owns an old mahogany stereo cabinet, jacked up so you can listen to an iPod through it. That’s the kind of truth in which I am interested.

Plus the silence, plus the static.

Charles Olson writes, “no event/is not penetrated, in intersection or collision with, an eternal/event.”

To which I offer this corollary: no event is not penetrated, in intersection or collision with the stock market.

I wish more poets would write about money.

Arizona poet Susan Briante’s third book is The Market Wonders (Boise ID: Ahsahta Press, 2016)—following Pioneers in the Study of Motion (Ahsahta Press, 2007) [see my review of such here] and Utopia Minus (Ahsahta Press, 2011—a collection that engages with theoretical physics, world events and the financial markets, specifically the Dow Jones, as well as more philosophical and personal matters, including “the developing consciousness of her infant daughter [.]” After years of similar-sounding ‘pastorals,’ it’s refreshing to see poets who insist on thinking beyond such limitations, from Lisa Robertson’s stretches into her own pastoral, Christian Bök’s intersections between humanity, language poetry and hard science [see my review of his latest here], and Briante, who manages to compose a poetry threading the financial markets with the seemingly-mundane aspects of daily life. In an interview posted at Touch the Donkey, she referenced the collection, still fairly manuscript-fresh:

I think as poets we are always excited by language, so yes there is something in addressing a new vocabulary. I was also very interested in engaging with the economic “crisis” of 2008, which marked the beginning of a new economic normal for many people as well as the beginning of a kind of narrative crisis. We measure of our “health” in the United States through economic indexes like the Dow Jones Industrial Average. Most news broadcasts end with those numbers. But why? That’s not an inevitable choice. The nation of Bhutan, for example, measures Gross National Happiness (http://www.gnhbhutan.org/about/) instead of Gross National Product. I created many of the poems that make up the manuscript, The Market Wonders, by recording the closing number from the Dow Jones Industrial Average (DJI), then plugging that number in a variety of search engines that would lead me to texts. I use those texts and closing number of the DJI to inspire or influence the poems I was writing. You can find examples of them here (http://www.poets.org/poetsorg/poem/october-14%E2%80%94-dow-closes-10015) and here (http://atticusreview.org/may-26-the-dow-closes-down-9974/).

The DJI became a lens for me and as I finished that project, I started to look for a lens. For the moment, science, especially physics, has been offering a new viewpoint for me. In the end, it is often about seeing how these perspectives, sets of knowledge, and vocabularies intersect with and inform the quotidian. 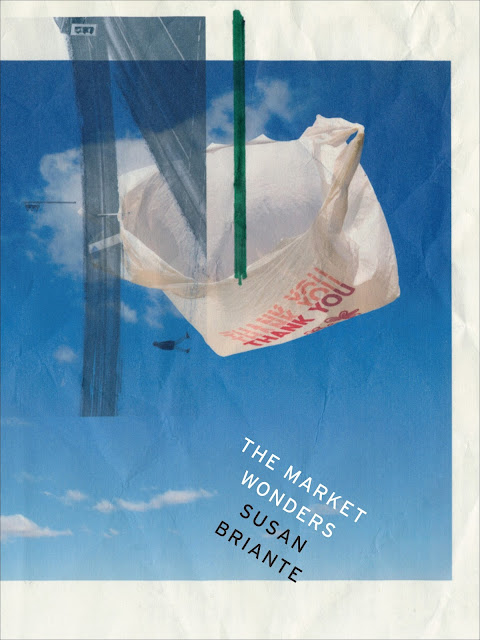 Part of what Briante manages to accomplish is to highlight just how little the general public (and, general reader of poetry) might be attentive to the shifts of the financial markets, and just how little we actually understand what those markets mean, despite their insistence upon influencing a variety of aspects of our lives. As she writes to open the poem “June 4—The Dow Closes Down 9931”: “My heart drops a note, systolic, beats for you, / Jim James sings on the radio, the radio sings: / yesterday the Dow rose, a flood. Outside // not a leaf moves, / I can’t feel a single branch, / let alone the oil in plumes, feathers // of a thousand estuaries. How do you separate / an individual from life?” And as much I enjoy the poems in this collection, it is in her prose, the prose-poems, where her work really shines:

I am no longer certain about the origin of things. My child does not sleep. So when I recalled the blond haired woman in the red dress playing a ukulele and my recognition—yes that’s how you learn to play, with a humble fret board, smaller neck—I could not remember whether I had seen her on television or in a dream

nor could I find the bit in The Autobiography of Alice B Toklas about Picasso and Stein turning a corner in Paris to see a camouflaged tank; Picasso stammering something about it is we who have created that. His recognition before the tank was aesthetic not systematic.

or the story about Petit Jean on a fishing boat who turns to a young Lacan and points to the glimmer of a floating sardine tin. Do you see it? He gestures to the object sparkling on the water’s surface. Well, it doesn’t see you.

An instrument might be a string of equations, technique, process, transaction.