For the sake of the fortieth anniversary of the writer-in-residence program (the longest lasting of its kind in Canada) at the University of Alberta, I have taken it upon myself to interview as many former University of Alberta writers-in-residence as possible [see the ongoing list of writers, as well as information on the anniversary event, here]. See the link to the entire series of interviews (updating weekly) here. 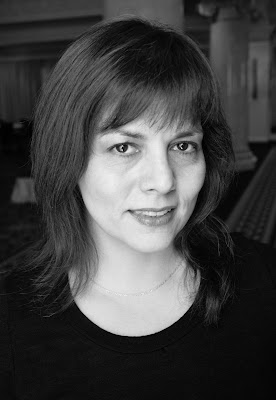 Lynn Coady is an award-winning author of six works of fiction. Her first novel, Strange Heaven, was nominated for a Governor General’s Award, and in 2011, her novel The Antagonist was shortlisted for the Scotiabank Giller Prize, an award she won in 2013 for her short story collection Hellgoing. Her work has been published in Canada, the US, the UK, Germany, France and Holland. Coady lives in Toronto, where she writes for television.

She was writer-in-residence at the University of Alberta during the 2008-9 academic year.

Q: When you began your residency, you’d been publishing books for about ten years. Where did you feel you were in your writing? What did the opportunity mean to you?

A: Oh this was a while ago, 2008-9. I was just starting The Antagonist and really looking forward to the residency because I was staying in a friend’s apartment. Being in another person’s space is a great way to begin a new project. It’s just you and your computer in a room that’s completely devoid of context and meaning, therefore no subconscious static happening in the background. And the routine of going to the university a few times a week broke up that solitude nicely. It was ideal for starting a new book—a quiet, routinized life with very few distractions.

A: No my first was at Green College at UBC and after that I did shorter ones at places like UBC Okanagan.

Q: How did your experience at University of Alberta compare to those other residencies?

A: I felt a lot more “embedded”—it was much longer than any of the others. The Green College one was just a semester I think. So I felt like I became a part of the U of A English department, somewhat—or at the very least a part of that community. It had an intensity to it as well—different people from all walks of life showing up at my office at various time to talk about their secret, hitherto private writing passions.

A: It’s actually a bit hard to talk about my experience in Edmonton with particular respect to my residency at U of A, because I spent a lot of time in Edmonton before and after that. I was there from 2005-2007, and then when I came back for the residency in 2008, I ended up getting married and hanging around for another seven years. But Edmonton and Alberta definitely had an impact on my writing. I can’t really quantify it except to refer to some of the work I produced around it—sections of The Antagonist are set in Alberta, and my story The Natural Elements is a real psychic distillation of my time there. I also wrote a story called Fin set in Edmonton that's coming out in a UK anthology pretty soon. There is something shocking about the Albertan landscape to a coastal person like me—it’s sort of terrifying to be so far from the ocean. And the winters feel like nature has a grudge against you personally. But at the same time, as a maritimer, I found something comforting in the people and culture—in Edmonton’s underdog, working class attitude. Vancouver was very alienating for me when I lived there because the people all seemed so healthy and well-adjusted.

But it’s kind of impossible to talk about how a place might have influenced your work without talking about how it influenced your life, and my time Edmonton, both inside and outside of the U of A residency, has influenced my life immeasurably.

Q: What do you feel your time as writer-in-residence at University of Alberta allowed you to explore in your work? You mention starting to work on The Antagonist; was your initial goal to explore the possibility of another novel, or did you see it more of an opportunity to expand your repertoire?

A: Yes, I just wanted to use the time to make a start on a new novel.

A: There were some odd ones that stood out, which maybe I won’t go into—every residency involves its share of wild cards as I’m sure you know. But I worked with some really interesting people. There was a woman in Fort MacMurray who I would talk to on the phone every week or so about a memoir she wanted to write about growing up in an outport of Newfoundland—it sounded like a fantastic story. There were people from all over the city, secret writers with regular lives and day jobs, who came out of the woodwork. And only the occasional creative writing student from the department. You would think the students would be the main ones stopping by, but I saw far more people from around town. I liked that—that a job in an english department ended up taking me outside the world of english academia to such a degree. U of A does a good job of getting the word out, reaching out to the community. Feels like the kind of thing universities should be facilitating, so I was pleased to be a part of that.

A: Well the residency definitely helped me make a start on my novel. I had the focus and the routine and the peace and quiet and big, empty office that I needed. And it brought me to Edmonton for the next few years of my life, so, insofar as Edmonton and Alberta has impacted on my work (as discussed above) the residency did as well.