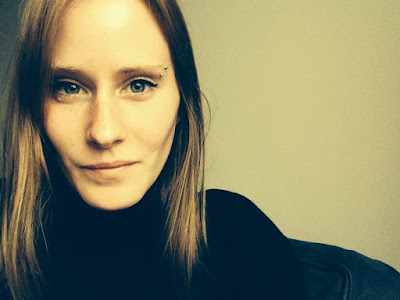 Sarah Bernstein is from Montreal. Her writing has been appeared in places like The Malahat Review, CV2, Contemporary Women's Writing, Room, Prairie Fire and Numero Cinq, and has been shortlisted for the Robert Kroetsch Award for Innovative Poetry. Her first collection, Now Comes the Lightning, was published by Pedlar Press in November 2015. She lives in Edinburgh, where she is writing a PhD, teaching, and working in a library.

1 - How did your first book change your life? How does your most recent work compare to your previous? How does it feel different?
I don't know that it has. I suppose it's allowed me to take myself more seriously as a writer.

Previously, I'd been writing short stories that relied mostly on dialogue and were quickly paced. I was interested in capturing voices. Also they were funny. Now Comes the Lightning is more precisely located in space and time: Europe between the wars, and the writing was helped along by a variety of cultural histories, newspapers and photographs by people like Brassaï. It's a bit grimmer in its subject matter, moves more thoughtfully, and it's much more visual. I was thinking to a greater extent about the relationship between image and form.  But I think it's also funny at times, especially if you agree with Beckett that there's nothing funnier than unhappiness.

2 - How did you come to fiction first, as opposed to, say, poetry or non-fiction?
What I write usually reflects my reading habits. At first I was reading a lot of Raymond Carver, Lorrie Moore, Grace Paley, George Saunders, Beckett -- writers who in their fiction are able to mix hilarity with a sense of the overwhelming awfulness of everything. Once I began reading poetry, and especially poetry that experiments with form, I started writing different kinds of things.

3 - How long does it take to start any particular writing project? Does your writing initially come quickly, or is it a slow process? Do first drafts appear looking close to their final shape, or does your work come out of copious notes?
Coming to something new is always a very slow process for me. I edit as I write, though, so not too much changes from the first draft.

4 - Where does a work of fiction usually begin for you? Are you an author of short pieces that end up combining into a larger project, or are you working on a "book" from the very beginning?
It begins with a scene, sometimes with a concept. The piece I'm working on now actually began with an action, which is rare as many of the characters I write don't seem to move around a whole lot, or if they do, you never quite catch them at it. I tend to write shorter pieces in the hope that eventually they'll cohere.

5 - Are public readings part of or counter to your creative process? Are you the sort of writer who enjoys doing readings?
I consider readings to be separate from the writing process. I really enjoy going to readings, but I rarely enjoy giving them because I have a terror of crowds.

6 - Do you have any theoretical concerns behind your writing? What kinds of questions are you trying to answer with your work? What do you even think the current questions are?
In the first book, I was thinking a lot about the problem of complicity, about how people act in situations they feel are out of their control. I don't, however, see my writing as trying to answer these questions.

7 – What do you see the current role of the writer being in larger culture? Does s/he even have one? What do you think the role of the writer should be?
I think most writing engages with the social world, engages with history, in a way that opens them up for examination. What that means will change according to the interests of each writer. Some writing provides specific and intelligible political critique; in other writing it's submerged or else not fully articulated; in still other writing, we see only scraps. But it's always there in some form.

8 - Do you find the process of working with an outside editor difficult or essential (or both)?
For Now Comes the Lightning, it was essential. Beth Follett is so sharp and always had the wider project in mind.

9 - What is the best piece of advice you've heard (not necessarily given to you directly)?
Get on with it.

10 - How easy has it been for you to move between genres (fiction to critical prose)? What do you see as the appeal?
There's a process of synthesis that underlies both creative and critical writing, you know, bringing things together to make sense of them. At the same time, the logic is quite different: the elements of a poem or a piece of fiction need only make sense within the context of the piece. It's self-contained. In critical writing, the logic is exegetical. You wrench meaning out, splay it on the page, rope it to the wider world. I guess there is a kind of brutality in writing critical prose that I find appealing.

11 - What kind of writing routine do you tend to keep, or do you even have one? How does a typical day (for you) begin?
I am a creature of habit. In the mornings, I walk down to the municipal pool and go for a swim. I try not to get too stressed out about my or other people's breaches of lane etiquette, but there is inevitably a brief power struggle of some kind over bench space in the changing room. Then I come home, make coffee, and sit down to write. At the moment, I'm trying to finish my PhD thesis, so other writing projects have been relegated to weekends or when I'm on a train.

12 - When your writing gets stalled, where do you turn or return for (for lack of a better word) inspiration?
Other writers. Also the lives of writers and artists. My writing has stalled recently, so in an effort to motivate myself I've been reading literary biographies (two of the most remarkable ones are Hermione Lee's Virginia Woolf and Elizabeth Gaskell's Life of Charlotte Brontë) and listening to this podcast called Meet the Composer. Finding out how other people think about their practice and how they come to specific pieces has been helpful. And there's nothing quite like the early successes of other people to make you feel inadequate and drive you on.

13 - What fragrance reminds you of home?
Bagels and coffee.

14 - David W. McFadden once said that books come from books, but are there any other forms that influence your work, whether nature, music, science or visual art?
I walk a lot. In the city, and also in the countryside surrounding Edinburgh, and I have found that walking long distances, especially uphill, helps to dislodge ideas. So in that sense, nature does influence my work, even if I don't write about it directly.

16 - What would you like to do that you haven't yet done?
Climb all the Munros. Or, you know, even just one.

17 - If you could pick any other occupation to attempt, what would it be? Or, alternately, what do you think you would have ended up doing had you not been a writer?
Well, right now I'm nominally pursuing a career as a university lecturer, so teaching is something I like to do. Ideally I'd like to do something that involves a lot of walking out of doors, so maybe I should have been a forest ranger.

18 - What made you write, as opposed to doing something else?
I've always been a text-based learner. I work things out through writing, so writing poetry or fiction is part of my ongoing learning process.

I don't watch too many films, but I watched Béla Tarr's Werckmeister Harmonies again recently, which I like for a number of reasons, but particularly because of the opening scene, which is set in a pub and sees a man moving a group of other men, in varying states of inebriation, into a sort of dance rendering of a total solar eclipse. Also Mihály Vig's score for the film includes a song called "Valuska," which is probably the saddest song in the world.

20 - What are you currently working on?
I'm working on some fiction about shy women.