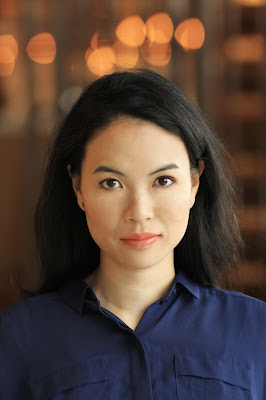 Doretta Lau's [photo credit: Ming Kai Leung] debut short story collection, How Does a Single Blade of Grass Thank the Sun? (Nightwood Editions, 2014), was shortlisted for the City of Vancouver Book Award, longlisted for the Frank O'Connor International Short Story Award, and was named by The Atlantic as one of the best books of 2014. CBC selected her as a Writer to Watch. In 2013, she was a finalist for the Writers’ Trust of Canada / McClelland & Stewart Journey Prize. She lives in Hong Kong, where she is an editor for a visual culture museum, and is working on a novel and a screenplay.

1 - How did your first book change your life? How does your most recent work compare to your previous? How does it feel different?
My story collection How Does a Single Blade of Grass Thank the Sun? is my first book and the entire writing and publishing process reshaped me into a new person. In order to complete it, I had to ask myself if I really wanted to be a writer. Did I want to face a blank page over and over for the rest of my life? For a few months, the answer was no. I had decided that grad school was a sunk cost was ready to move on with my life. Then I discovered in January 2012 that I really did want it. So I had to figure out how to get past the procrastination and perfectionism that was preventing me from doing the work. I had to learn to surmount the obstacles that I made for myself due to fear of failure.

My most recent short story, “Best Practices for Time Travel”, was published in Room Magazine last fall. One of the questions I am asking with my collection is what is fiction? For this piece, I am exploring just how far I can push the form without it becoming unintelligible. I wanted to see if I could write about time travel, pornography, misogyny, and racism in a compelling way.

2 - How did you come to fiction first, as opposed to, say, poetry or non-fiction?
I was a better poet as an undergraduate, but when I applied to grad school I decided to study fiction out of some misguided belief that it would be easier to forge a career in stories rather than poetry.

3 - How long does it take to start any particular writing project? Does your writing initially come quickly, or is it a slow process? Do first drafts appear looking close to their final shape, or does your work come out of copious notes?
It took me ten years to complete my book, though I wrote the opening story over the course of a single afternoon. I am a slow writer. I have the tendency to get excited about research and go down rabbit holes. Like Autonomous Sensory Meridian Response horror videos. [link: http://motherboard.vice.com/read/horror-asmr-will-give-you-tingles-and-chills]

My first drafts used to appear close to the final shape, but in order to get over perfectionism I had to let myself write whatever came to mind and not permit myself to judge every word and punctuation mark until the final draft. Now my early attempts usually have holes where I’m not ready to deal with a particular emotional moment and I’ll write an ugly note and skip to the next scene and go back later. After this, I spend a lot of time on editing. I am trained as a copyeditor, so when I get down to the details I will pull every sentence apart.

4 - Where does a work of fiction usually begin for you? Are you an author of short pieces that end up combining into a larger project, or are you working on a "book" from the very beginning?
I usually think of a sentence or an image and work from there. I try to map out where I want to go and have a skeleton of the full structure, but a lot of the process is writing many bad paragraphs until the words generate a spark. I generate a lot of text and cut anything that isn’t working. It’s not the most efficient way to write, but it allows a lot of room for experimentation.

5 - Are public readings part of or counter to your creative process? Are you the sort of writer who enjoys doing readings?
I enjoy doing readings because it gives me a chance to present my work directly to people. I like getting away from the computer, yet still engaging in the writing. Readings are a chance to meet other writers and readers.

6 - Do you have any theoretical concerns behind your writing? What kinds of questions are you trying to answer with your work? What do you even think the current questions are?
The main question for me is, as I mentioned earlier, what is fiction? How far can I push the story in the direction of an essay and still call it fiction? Right now I am also asking myself if I’m capable of writing a novel. I know I can sprint, but can I take on a marathon?

7 – What do you see the current role of the writer being in larger culture? Does s/he even have one? What do you think the role of the writer should be?
I think being a writer is about bringing a point of view to the world. If I am honest and unafraid of putting words to the page, perhaps it will resonate with someone out there who needs my stories because they want to see themselves reflected somewhere in the culture.

8 - Do you find the process of working with an outside editor difficult or essential (or both)?
I think it’s essential. If my editor is good, my writing can only improve.

9 - What is the best piece of advice you've heard (not necessarily given to you directly)?
Once during a seminar Richard Ford told us not to write when tired. He is right—I resent writing if I do it when I feel awful.

10 - How easy has it been for you to move between genres (fiction to journalism)? What do you see as the appeal?
It’s fairly easy for me because the genres are so different. For fiction, I can make anything up, while for journalism I have to follow rules and ensure that I am approaching the story in an ethical way. I like journalism because it forces me to go out into the world and engage with people.

11 - What kind of writing routine do you tend to keep, or do you even have one? How does a typical day (for you) begin?
When I was in the last stages of the collection, I woke up at five every morning to get the writing done first before doing freelance editing and journalism.

At the moment, I have go to an office, so my focus is on staying healthy enough to write before and after work. I have the kind of routine that sounds kind of lifestyle guru ridiculous: no caffeine, no alcohol, fresh green juices, flax and chia seed coconut milk puddings, Chinese soup, journaling, meditation, acupressure mat (I lay on it and catch up on podcasts like Can’t Lit), foam roller exercises, and at least ten thousand steps a day. (I am obsessed with my Fitbit.) I ate a lot of McDonald’s and drank many Diet Cherry Cokes and had countless whiskeys while finishing my first book—my body can’t take it anymore, so I had to change.

Once a day for at least five minutes I write something by hand. Sometimes it’s just a list of things I’m grateful for or things I’m angry about or just random thoughts. When I’ve done this, then I’m ready to work on a project.

12 - When your writing gets stalled, where do you turn or return for (for lack of a better word) inspiration?
I can always find the answer by reading. When I was working on the collection, I often reread the Mavis Gallant story “When We Were Nearly Young”. Also, if I’m really stuck I go for a walk.

13 - What fragrance reminds you of home?
Rice steaming in the cooker.

14 - David W. McFadden once said that books come from books, but are there any other forms that influence your work, whether nature, music, science or visual art?
Music, art, and film influence my work a lot—that’s the flora and fauna of my landscape. I recently finished writing an essay about the artist Cao Fei for ArtReview, so I immersed myself in her art. At the moment, I can’t stop listening to the Disasterpeace soundtrack for It Follows.

16 - What would you like to do that you haven't yet done?
I’d like to write for television. Let’s just say I’ve done a lot of research in this area.

17 - If you could pick any other occupation to attempt, what would it be? Or, alternately, what do you think you would have ended up doing had you not been a writer?
At my day job, I’m an editor for a museum of visual culture. I’ve been a production editor, a university admissions clerk, a journalist, a magazine editor, a researcher, and a copywriter. I’ve also had my share of service jobs. With my skill set, there are times I think I’d make a good spy. I’m good at gathering information and finding patterns.

18 - What made you write, as opposed to doing something else?
I’ve honed my craft. Writing is what I’m meant to do.

It’s been a while since I’ve seen a film that I’ve really loved, but the last three I saw were Dirty Grandpa, The Big Short (I can’t get enough of Michael Lewis’s books), and Eli Roth’s The Green Inferno.

20 - What are you currently working on?
I’m working a screenplay that’s adapted from the first story in my collection—the characters start receiving text messages from the future—and also finishing up a collaborative artwork with the architect Stephanie Choi that focuses on surveillance and technology.