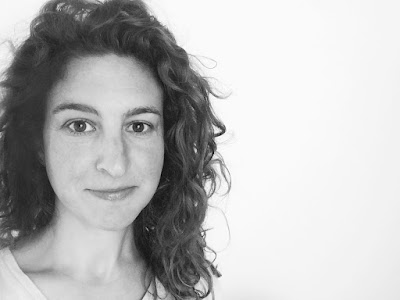 Amanda Nadelberg is the author of Isa the Truck Named Isadore, Bright Brave Phenomena and, most recently, Songs from a Mountain (Coffee House Press) and a chapbook called The Bartleby Poems (The Song Cave). She lives in Oakland.

1 - How did your first book change your life? How does your most recent work compare to your previous? How does it feel different?
However sad (or not) to say, I don’t think it did. Though writing has certainly made life different, as it means the day jobs I’ve held become a little more sacred to keep room for poems. This book feels like a continuation of the others in the ways being a person is a continuing. I’ve been writing longer poems though, as the cut off for me used to be the end of the page.

2 - How did you come to poetry first, as opposed to, say, fiction or non-fiction?
Got pulled out of a third-grade classroom for a one-day poetry workshop. (For being sensitive.)

3 - How long does it take to start any particular writing project? Does your writing initially come quickly, or is it a slow process? Do first drafts appear looking close to their final shape, or does your work come out of copious notes?
Some and some. Methods change of course and editing is a much more important part of the process now than it was for me before—sometimes it even feels like editing is the writing. Writing feels both like a quick thing (lightning) and something that takes several eternities (patience). The forming of this book took about 5 years, which is at least twice the time it took for previous installments. Seeing how poems hang out in that uncertainty called time is a good exercise.

4 - Where does a poem usually begin for you? Are you an author of short pieces that end up combining into a larger project, or are you working on a "book" from the very beginning?
(D) All of the above. Too, it seems like good news to let both the ways happen, to not assume we are always the same kind of writer. I like the effects of the forms of curious accumulation and also sometimes it’s nice to have some more flashlights along the way.

5 - Are public readings part of or counter to your creative process? Are you the sort of writer who enjoys doing readings?
A few years ago I imagined how nice it would be to read from the inside of a cardboard box. But yes I like to do readings. They can be honest and embarrassing. But often doing them is costly and poets have no monies.

6 - Do you have any theoretical concerns behind your writing? What kinds of questions are you trying to answer with your work? What do you even think the current questions are?
What’s for breakfast. Will people stop using the word poetry to compliment works of other genres and just start reading more poetry for god’s sake. Can I have a vacation (not yet).

8 - Do you find the process of working with an outside editor difficult or essential (or both)?
There is that moment you snap into realizing no one has seen what you’ve been doing and it’s then that I tend to send work to a few friends in particular. One of the best things I learned about editorial feedback (both as one who dishes it out and receives it) is that things that sound familiar should be taken seriously and things that sound far off/unrecognizable are probably just not the right advice for you /send it on to Jesus.

9 - What is the best piece of advice you've heard (not necessarily given to you directly)?
Don’t write the same book twice.

10 - What kind of writing routine do you tend to keep, or do you even have one? How does a typical day (for you) begin?
With coffee and water and sometimes walking. I’ve never had so much of a writing routine; I’m not a person with an everyday practice. But I like to get up early.

11 - When your writing gets stalled, where do you turn or return for (for lack of a better word) inspiration?
Books. Movies. Home movies. Television. Song. Walking in the neighborhood. Speaking with my sister’s children. Pizza. Only kind of kidding.

12 - What fragrance reminds you of home?
The house I grew up in? Dank Basement. My apartment? I don’t know. Coffee? Lavender? The smell of purses my mom has handed me down.

13 - David W. McFadden once said that books come from books, but are there any other forms that influence your work, whether nature, music, science or visual art?
Louis C.K., Parks and Rec, memories of watching Seinfeld with my parents. Commuting has been significant in the past three years. And I’ve written several poems while watching the movies of Eric Rohmer. Movies in general do a lot for me, and especially ones with subtitles for how it’s a marriage of reading and film.

14 - What other writers or writings are important for your work, or simply your life outside of your work?
Working outside of Academia and publishing has been helpful. Some of my favorite writers that I always return to are Robert Creeley, C.D. Wright, Ron Padgett, Alice Notley. Lately I’ve been reading more fiction. I am excited for the 5th installment of Karl Ove Knausgaard. I read The Argonauts twice last spring.

15 - What would you like to do that you haven't yet done?
My answer is not bungee jumping.

16 - If you could pick any other occupation to attempt, what would it be? Or, alternately, what do you think you would have ended up doing had you not been a writer?
I wonder this every day and I’m not sure.

17 - What made you write, as opposed to doing something else?
Mishearing the world.

19 - What are you currently working on?
A maybe book length poem that I began in October. Today I’m on page 35. It’s nice to have something to return to and write into.