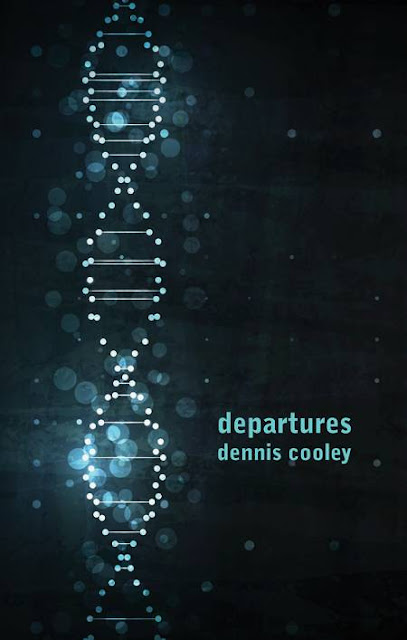 With his latest collection of poetry, departures (Winnipeg MN: Turnstone Press, 2016), Winnipeg poet, editor and critic Dennis Cooley [see my 2015 piece on him in Jacket2 here] explores “his own mortality” following a health crisis. As the online catalogue copy for the book reads: “Recovering in hospital after a burst appendix, plagued by hallucinations and poisonous mistrust, Dennis Cooley retreats to memories of ancestors and of his rural Saskatchewan roots, in departures, his 20th book of poetry.” As the collection opens: “then, Winnipeg, hospital, / the Victoria, jumbled, / didn’t know / where or when [.]”

Regular readers of Cooley’s work have long been aware of his expansive book-length projects, each constructed around a set of specific ideas, themes or subjects, composed as collaged-manuscripts that stitch and weave their punning and playful ways, whether writing on the foundations of civilization against his prairie in the stones (Turnstone Press, 2013) [see my review of such here], his late mother in Irene (Turnstone Press, 2000), vampire lore, literature and legend in Seeing Red (Turnstone Press, 2003), the alphabet-play of abecedarium (University of Alberta Press, 2014) [see my review of such here] or the histories and legends of Manitoba outlaw John Krafchenko in Bloody Jack (Turnstone Press, 1984; Edmonton AB: University of Alberta Press, 2002). What becomes curious, the further Cooley releases poetry collections, is the subtle evolution of his book constructions, as each collection of poems is held together through structure, theme and ideas, some of which are quite clear, and others, far more subtle. While earlier collections might have functioned more as collaged or quilted sequences, departures manages to exist as, deliberately, a more fragmented (and even, seemingly random) suite of predominantly-untitled poems, sketches and reports, as well as being held very close together through his ongoing meditations and inquiries, medical reports and retellings, and tweaks and quirks of language only Cooley could construct. He writes: “They enact procedures. Reduce bandages, extract tubes. Ease / the hooks, unflesh lures and barbs. Cut off the brightness, / little by little lift him off. un-net him onto water. Leave the / knife by his side.” Further, playing off the abbreviation “DNA” against “Canada,” writing a lovely, only-Cooley riff that even references, ever slightly and slyly, the work of another:

In an interview with Jonathan Ball (dated 2003; posted 2010), Cooley talks of some of the construction of his poetry collections:

Most, if not all, of your collections are organized around a theme, concept, or semi-narrative, though you delight in diverting yourself from this loose “topic.” What is it that you find attractive about these conceptual threads, and why do you indulge yourself in digressing to such a great degree in the published work?

For me, it’s a way of generating texts. It gives me a site to research, to see what the possibilities are; there’s a kind of focus in thinking about a terrain, saying, “what can be done in this area.” I find it really generative, and because it works so well for me I always recommend it to others. Find a site, and then play off it to see what the possibilities of it might be. If you write a balloon poem, well, maybe you’re interested in doing a series, and maybe this extends into a notion of flying things, or rubber things, or symbols of innocence, or whatever—you often find all sorts of things by accident.

I got into the Dracula poems because I was writing a series of fairy tale poems, some of which became Goldfinger, and as I was reading and working there I thought, okay, well, what else might I write? and I thought of Dracula and how he was sort of a fantasy figure, and I wrote a Dracula poem, which I don’t think is in the collection now because I willfully pulled it, because there’s just so much stuff to draw from. So I wrote that and I found myself writing a bunch of Dracula pieces, they just went on and on and on, I started about 1989 I think.

departures is a collection of, as the copy says, “hallucinations and poisonous mistrust,” but also a meditative exploration of big ideas attached to a health crisis, setting his thematic boundaries and then routinely crossing them, writing his health and his history, and multiple points both aside and between. “It is not fibrous,” he writes, “there are no veins or threads. It is smooth but it is not shiny or slick. It glows it seems with its own light, light green to yellow, shape of a rootless molar. A gumdrop.” He continues:

A phosphorescent gland, green and golden very deep he follows down, a bit slough in Saskatchewan seven or eight feet deep. He can feel it pulse. He can almost see through it.
Another time an old computer, hot and smelling, in oil and huzz. It contains occult lore, formulae, health records.

Towards the end of the collection, he writes: “Cooley re-enters / the coiled and calling world / carries with him / a slashed and bulging stomach. […] his appendix / has up & left him / he will not miss it / one little bit [.]” In Cooley’s hands, books can percolate and expand for years before seeing print, with some earlier fragments of the collection appearing in his sunfall: new and selected poems 1980-1996 (Toronto ON: Anansi, 1996). Just how long ago did his appendix actually burst?