The latest from Perth, Ontario poet Phil Hall is the volume NIAGARA & GOVERNMENT (St. John’s, Newfoundland: Pedlar Press, 2020), a suite of meditations carved from lyric fragments (alternately: lyric fragments carved from a suite of meditations). Notwithstanding his Governor General’s Award win and Griffin Poetry Prize nomination, I always think there should be larger attentions provided Hall whenever a new volume of his poetry emerges, given how solid his centre remains, how collected his lyric collages, and how pervasive his wisdoms that tun through these myriad threads of reference, articulations, pauses and speculations. Phil Hall weighs, considers and stitches together a myriad of disconnects, excising the white noise from a potential overload of information into something uniquely coherent. The poems concurrently shudder, and remain sleek. At the end of the poem “Ars Poetica,” he writes:

I work toward an intimacy    an intricacy     approaching absurdity
spielraum

from eked notes    of self-loathing    & affinity
I invite a discordance 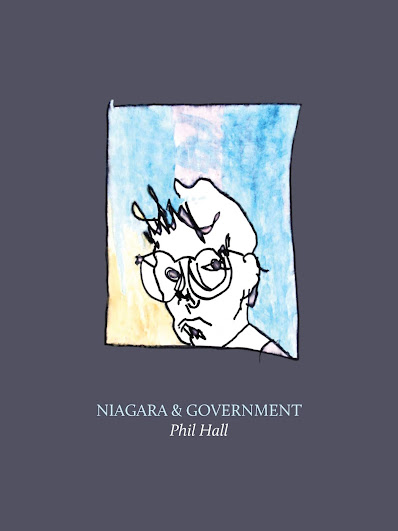 Through more than a dozen trade poetry collections, Hall has mined further and deeper into the complexities of language, his histories of abuse, addiction and recovery, and his attentiveness to mentors, contemporaries, tokens and folk art. As he writes in the sequence “Stan Dragland’s Wall”: “So folk art   & fine art   are one // folk   in its shed materials / fine   in its poetics of   amodal   disrepair // as with the first papier collés  by Braque 1912 / we must bring to this wall   a multiple perspective [.]” He stitches together a whole cloth out of scraps, and something valuable out of what others might easily discard, or overlook, allowing for a perspective more humble, and more democratic in scope. He writes Roy Kiyooka, Dolly Parton, Stan Dragland, Nudie Cohn, Lorine Niedecker, Emily Dickinson, Robert Duncan and Eugene Mcnamara. He writes of “the legendary Joe Junkin,” “the goalie for the Bobcaygeon Ti-Cats [.]” He writes of rude songs, typos and the bottom of the seemingly bottomless bottom.

Increasingly, Hall writes an unbroken, elegiac line composed of lyric fragments, cadence and the pregnant pause, moving further along a path he constructs as he walks, following bpNichol’s “poem as long as a life.” In NIAGARA & GOVERNMENT, more than he has done with his other recent works—including Conjugation (Toronto ON: BookThug, 2016) [see my review of such here] and My Banjo & Tiny Drawings (Toronto ON: Flat Singles Press, 2015) [see my review of such here]—he writes as though his life depends upon it; how recovery is a process not a goal-post. He writes with the perspective that the true way, or at least his way, through and potentially past the far end of trauma is through language: “without a mask I am no past / without a past I am an amalgam devoid of loyalty // except to the presenting moment / its deep accordion sigh // the next word has / my true ancestors within it [.]” (“Bottom”).

As Hall’s friend and contemporary Stan Dragland offers in his essay “DIFFICULTIES,” from The Difficult (Pedlar Press, 2019):

“I guess to be sincerely, honestly difficult,” says poet Phil Hall, “a poem has to be heard by the poet who made it as merely the clearest possible talk its maker could come up with.” Difficult English poet J.H. Prynne has a related thought about poetic responsibility. He differentiates “post-modernist playfulness, where meaning is allowed to skim across a surface in a deliberately arbitrary way” from something that goes deeper. “[T]he use of difficulty as a method of poetic thought is different both in intention and effect from difficulty as a playground or a funfair.” I offer my own “clearest possible talk,” realizing that it’s difficult to avoid a certain amount of difficulty in writing about the difficult. However, part of the pleasure of writing this, for me, has been just to tell some stories about writers, writing and readers. About the stories there is nothing difficult.