Carl Watts reviews my Mansfield Press poetry title, A halt, which is empty (2019) for Canadian Literature 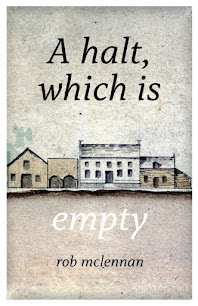 I am incredibly grateful for Carl Watts’ attention recently, after he reviewed my Mansfield Press poetry title, A halt, which is empty (2019) alongside Mark Laba’s The Inflatable Life (Anvil Press, 2019) over at Canadian Literature. Thanks so much!

This is actually the fifth review of the book (which makes me feel even luckier, honestly), after Kim Fahner discussed same for Arc Poetry Magazine, Jessica Drake-Thomas reviewed it over at her site, Jonathan Ball reviewed it in the Winnipeg Free Press, and Mary Kasimor reviewed the same at Otoliths. You can see the original review here.

There are certainly options for you to order directly from the publisher, or through whichever of your local bookstores are doing delivery, I'm sure, although I can mail you a signed one, if ever such appeals ($19 Canadian / add $2 for US orders; add $5 for international orders; send me an email: rob_mclennan (at) hotmail.com).

As Watts' review of the collection reads:

Fixtures in a poetry community, even those who are notably prolific, can sometimes be accounted for without much trouble. But figures whose writings span multiple genres, which may come from the smallest of small presses or in otherwise ephemeral formats, can be harder to get a handle on. Any attempt to make sense of such writers, especially in a brief review, seems preposterous.

And yet, a reviewer taking on a new book by rob mclennan may note that his sprawling body of work has been shifting toward producing a somewhat less conventional form of lyric. A halt, which is empty bears out this development; its title comes from a passage by Claude Royet-Journoud that associates writing with the perception of movement. The opening poem’s first section is caught up in this crudely physical act of stopping and noticing; it relies on short “sentences,” frequently of two words (“Uninterrupted, swallow. Machines, recirculate. Relieve. We watch for symptoms, shallow”), distilling into particles everyday processes that clunk with their materiality.

But passages like “[a] mass of modern bus and antiquated streetcar. The power of an average. Slanting, ruin” are also typical mclennan in their alternately clattering and airy impressions of Ottawa. Much of the book strikes this balance between experimental conceit and familiar authorial voice. The epigraph to “Corporation of snow” disputes the colonial “Eskimo words for snow” myth; it asks whether any writing can be truly novel—“[p]articles, we designate. A show of hands. More sentiment / than sediment”—while again simplifying and physicalizing its conceit.

“Birthday poem for Gwendolyn Guth” combines the above techniques with apostrophe: “You turn, you turn, // remark, refrain.” Such moments depict a group of creative people working in loose association with one another, creating a picture of mclennan as publisher of broadsides and of work by possible up-and-comers—a writer’s writer’s writer whose network defines his past and pervades his present as he brings others into the fold, his poetics embodied as they dilate within recognizable limits.