Cross: Let’s start with your first full-length trade edition, Considering how exaggerated music is (a book that collects many of your early chapbooks). You claim, in Autobiography, that “It was the first time [you were] writing.” In what ways is this writing different from other experiments you were involved with at the time—for instance, your chapbook O and Other Poems—and can you elaborate on your claim that this work is “a light extremity?” [20 June 2007]

Scalapino: I regarded myself as writing ‘for the first time’ with “hmmmm,” because I had the sense of that work being unlike the other poets I’d read, of being my own; whereas O and Other Poems, my very first poems, were similar, as I discovered while in the midst of writing them, to Frances Ponge, a discovery which cut short that writing and prevented me from beginning anything else for a year. The poems in O were as if doing the inside of objects, passionate elucidation of objects, somewhat similar to Ponge (at least that was my intention recognizing the similarity when I read him).

As for why I described “hmmmm” as a “light extremity”: emerging from a violent conjunction of circumstances, I was in a state of shock and “hmmmm” arose from being in that state and waking up in that state. The subject matter of “hmmmm” was not the source, was after what I’m describing as a violent conjunction of circumstances, the sense of the individual’s (my) private context and a violent outside, public context (in that case the Vietnam War) entering or being the same space. Perhaps the vernacular expression “blown away” is similar to “light extremity” and realistic conveying having lost or no longer having your self. Having been dismantled, no longer there, there’s a sense of being curiously free, so even painful circumstances personal-social happening to or in front of oneself (not war) seem very funny. This is not unlike the theme of sensation of objects (as in O and Other Poems) but more wildly felt.

The late American poet Leslie Scalapino (1944-2010) is a name I’ve known for some time as a writer well-respected, well-read and well-loved, and one I know I myself haven’t read nearly enough work by, so I was pleased to recently receive a copy of the small book Leslie Scalapino w Michael Cross: Last Interview & “Poetics” (Further Other Book Works, 2019). The interview, which takes up the bulk of the small book, was conducted occasionally over email from 2007 to 2010, just up to Scalapino’s death; an interview that moved in and out of attention as other matters emerged. As Cross writes to open his introduction:

I first worked up the courage to propose a long-form interview to Leslie Scalapino in September of 2006. By then, I had spent most of my early writing life obsessed with her project. Her work was the first to genuinely illustrate for me what poetry is and what it can ultimately do, and ever since that first glance into that they were at the beach—which I discovered by chance as an undergraduate—I spent much of my free time attempting to apprentice myself to her. As a graduate student at Mills College in the early aughts, I spent hours obsessively scanning the shelves of an all-but-forgotten warehouse in San Leandro called Gray Wolf Books, which I’d discovered was a treasure-trove of Bay Area Language writing, including shelves of abandoned and out-of-print O Books. I sent a letter to the publisher’s address on the back of those books, and incredibly, Scalapino herself answered with the generosity that defined her among younger poets. 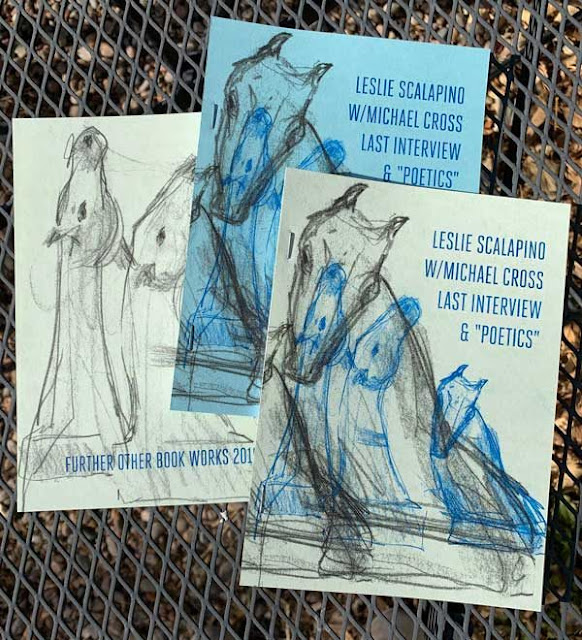 An experimental writer that blurred the distinctions between poetry and prose, Scalapino was the author of, according to an online bio, the author or editor of “thirty books of poetry, prose, inter-genre-fiction, plays, and essays, including a collaboration with artist Kiki Smith, The Animal is in the World like Water in Water (Granary Books, 2010); It's go in horizontal/Selected Poems, 1974-2006 (University of California Press at Berkeley, 2008); Day Ocean State of Stars' Night (Green Integer, 2007); Zither and Autobiography (Wesleyan University Press, 2003); It's Go In/ Quiet illumined Grass/ Lands (The Post-Apollo Press, 2002); a collaboration with the artist Marina Adams, The Tango (Granary Books, 2001); ORCHID JETSUM (Tuumba, 2001); and SIGHT (Edge Books, 1999), a collaboration with the poet Lyn Hejinian. Her long poem way (North Point Press, 1988) won the Poetry Center Award, the Lawrence Lipton Prize, and the American Book Award from the Before Columbus Foundation. Scalapino taught at the Naropa Institute, Bard College, Mills College, and UC San Diego. She was the editor and founder of O Books.” Even as it moves through time, pausing for weeks and even months at a time, Cross’ interview attempts the range and breadth of Scalapino’s creative work, a work clearly dear to his attention.

The interview is thick, and her responses can often go on for pages, moving through theory, language and influence, and Scalapino is clearly game to engage with such an open-structure as a multiple-year interview. As she responds: “You give a multitude of possibilities—I like all of them to be in operation at once. Even if they are conflicting they are questions in the mind and the response of the reader, not needing to cancel each other but jostling.” As well, almost included as “bonus material” at the back are two essays on poetics by Scalapino, adding to the heft of this small but enlightening and, dare I say, essential collection.