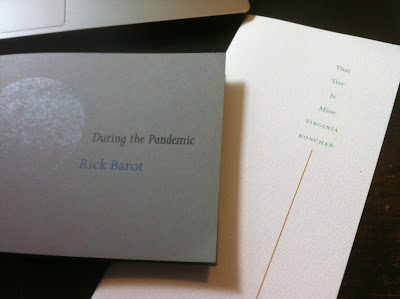 September! This is totally the longest March Break on record. Did I mention we’re keeping our wee children home? And don’t forget to keep an eye on the ottawa small press book fair home edition interviews, ongoing over at the ottawa poetry newsletter blog. Just because we don’t have physical fairs right now doesn’t mean that there aren’t still publishers and writers out there producing, right?

Charlottesville VA: I recently received a copy of Rick Barot’s exquisitely-designed chapbook During the Pandemic (2020), a chapbook-length sequence produced by Brian Teare’s Albion Books. During the Pandemic is the third chapbook in Albion Books’ seventh series, following Ryan Eckes’ fine nothing [see my review here] and Aditi Machado’s Rhapsody [see my review here], and preceding Tsering Wangmo Dhompa’s forthcoming Revolute. Composed as a numbered sequence of thirty prose poems, each of which begin with “During the pandemic,” there’s almost a quality of Georges Perec’s I Remember (and subsequent books such as Joe Brainard’s I Remember and George Bowering’s The Moustache: Memories of Greg Curnoe) to Barot’s prose sequence, utilizing the opening phrase as a repeated jumping-off point. Each section opens with a return to the beginning, so that it might be able to move further out.

During the pandemic, I followed each impulse as it turned into a procedure. I bought a can of peaches because I read a novel in which it figured as a metaphor. I separated the stuff inside a drawer, like a TV dinner and its neat portions. I looked at photographs and suddenly understood that a photograph was a letter to someone in the future. In one photograph, he stands in front of the cinderblock pattern of a wall, his hair still brown, his red sweatshirt draped over his shoulder like a bloody pelt.

One would suspect that such a work exists as a direct response to the current crisis, which makes the meditative craft and ease of such a work that much more impressive, aware of how quickly this poem may have been composed, to already appear as a chapbook, six months or so after lock-down began. This really is a stunning poem, incorporating numerous elements of how the lockdown and crisis has shifted daily life, and daily thinking. I had to look up who Rick Barot is, a poet based in the San Francisco area with a small handful of poetry titles to his credit, including one this year from Milkweed Editions (which I clearly need to get my hands on).

During the pandemic, I watched the screen of my phone as he moved his phone around the outboard engine he had brought inside, cleaning it, tinkering with it. The thing looked like sculpture: shiny in parts, in parts streaked with grease. He was states away. When his face returned to the screen, it was smudged from what he had been doing. Don’t touch your face, I lamely said, touching the screen, cut by the terms of our separation: adoration and sorrow, sweet and bitter.

Wolfville NS: It was good to see a new chapbook by Virginia Konchan, her That Tree Is Mine (Gaspereau Press, 2020), another beautifully designed item from Andrew Steeves and Gary Dunfield’s Gaspereau Press, existing as number forty-five in their “Devil’s Whim” chapbook series. Currently based in Halifax, Konchan is the author of two full-length poetry collections and three previous poetry chapbooks (including one from above/ground press), and That Tree Is Mine furthers her work in the short meditative lyric, one that engages with a consideration of spiritual elements, the natural world and eco-concerns. She moves from observation to abstract, shifting formal elements through earth, air, mashed potatoes and human progress.

That Tree Is Mine

We are content in our domicile,
out of sync with meter and form,
something so far from a perfect
first draft exploding: Pop Rocks,
on the tongue. I open my wardrobe
and proper nouns fall out. I lace
my shoes and get caught on
sprung verbs. I desire to get close
to the Creator’s intention for my life,
and, if there isn’t one, to make
splendid antithesis in response
to an original clause, in time.
The proprietor’s note flutters
in the wind like a fussy bride.
I often wonder how it would feel
to look out a window
and say, that tree is mine.