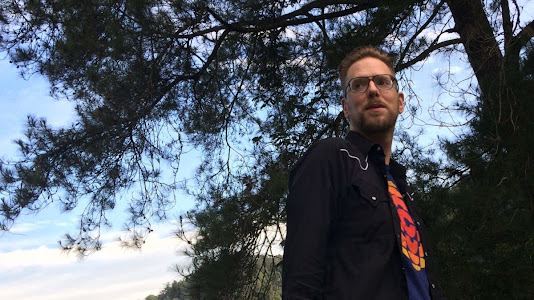 Andrew Unger is best known as the author and founder of the satire website The Daily Bonnet. An educator based in southern Manitoba, his work has appeared in Geez, Rhubarb, Ballast, CBC.ca, the Winnipeg Free Press, and many others. If you go back far enough, he’s probably related to you. Once Removed is his debut novel.

Does a website count? I started the satire website The Daily Bonnet in 2016, and have written at least one satirical article every day since then for four years. About 1800 articles at this point. The website is kind of like the Mennonite version of The Onion. I think most people are used to it by now, but occasionally new readers are shocked to discover that Mennonite satire is even a thing. When they think of Mennonites they envision a man in a dark suit, long beard, and suspenders milking a cow or raising a barn, rather than some dude in a Purple Rain T-shirt churning out satirical articles about Donald Trump’s plans to build a wall to keep out the Mennonites.

So how has this changed my life? Someone recognized me and paid for my pho at a local Vietnamese restaurant the other day. That was nice. It’s good to know your work is appreciated. I think the success of the website also made my novel an easier sell.

My new book Once Removed feels both similar and different. It is a comedy, although not strictly satire, but the process of writing book-length fiction is obviously quite different than writing short satirical articles.

Poet Sarah Ens, who edited my novel OnceRemoved, once told me that one of the things that attracted her to poetry was the fact that the writer was not confined to telling a story. Poetry can be about a feeling, a moment, a memory. I’m not a poet, but I like that aspect of poetry. It’s free. In the same way, I feel fiction is freeing, at least compared to non-fiction, in that you’re not confined to the facts.

The first draft of Once Removed looks absolutely nothing like the finished product. I think perhaps the only element that remains from that first draft is that the protagonist is a ghostwriter. I think the story comes to life in the editing. That’s where I really discovered the story I wanted to tell.

As a satirist, the fiction begins with observation, more so than imagination. You look at the world and people around you – you look at yourself – and then you write what you see. My novel, although not strictly satire, also had its genesis in observation. I write shorter and longer pieces of fiction but in the case of Once Removed, it was intended to be a book from the beginning.

When I read publicly I can hear where people laugh and where people don’t laugh. Sometimes it’s unexpected. So, yes, public readings have made me a better writer.

I think one thing my website and my novel have in common is the question of identity and the role of minority cultures within the macroculture. Once Removed is about a ghostwriter in a small town trying to preserve the stories of the aging population, while the town’s mayor is trying to demolish historic buildings and silence writers he sees as an embarrassment or “bad for business.” Doesn’t sound that funny … but it is. I think comedy can be an effective tool to raise important questions.

I think writers can play a role in reflecting culture back to itself. This obviously is the role of satirists and comedians, but I think even writers of non-comedic works do this as well. At the same time, I think writers can’t deny the fact that people read to be entertained, though I don’t think we should think of “entertainment” as the equivalent of “distraction”, as it’s sometimes portrayed. Readers need to be engaged in the work in some way, and this might mean the writer is not distracting people from the reality of their lives, but boldly presenting the truth – both can be “entertaining.”

I found the editing process on Once Removed absolutely wonderful. Sarah Ens always had a way of asking the right questions. The book is much better for her contribution.

At the risk of repeating a cliché, “write what you know” is absolutely true. When I was younger I was reluctant to write about my own cultural background, thinking that people wouldn't be interested in reading about Mennonites. I was wrong. Only when I finally did write about what I knew, did my writing reach a wide audience.

10 - How easy has it been for you to move between genres (journalism to fiction)? What do you see as the appeal?

I usually write in the evening, sometimes late into the night, but I have no set routine. I have noticed a few things that don’t have an explanation. When I’m writing satirical articles I’m not nearly as sensitive to distraction as I was working on the novel. While working on Once Removed I could not tolerate any background noise or music. And I love music. I just couldn’t have it playing while I was writing or editing.

I take a walk. Of course, in the town where I live this peaceful stroll is usually interrupted by young men in loud Honda Civics cruising up and down Main Street. But, if I stay away from Main, I can clear my head and think.

Yes, a lot. Guy Maddin’s films, for example. I don’t think my novel has much in common with his surrealism or his visual style, but his exploration of loss, community, and identity, especially in My Winnipeg was a significant influence.

The cover of my novel also contains a traditional Mennonite floor pattern by artist Margruite Krahn. The brightly-coloured patterns were often hand-painted by women on the floors of Mennonite housebarns. This is mentioned in my novel. These women lived such austere and restrictive lives, but as Margruite told me “you cannot squelch beauty.” That need for beauty found its outlet on the floors of Mennonite homes.

I’d like to visit the village in Ukraine where my grandfather was born. In 1925, at the age of five, he came with his family as a refugee to Canada and, to my knowledge, no one in my family has been back there. The name of the village has changed, but my understanding is that it still exists.

Well, I am a teacher as well as a writer. I think those occupations go together well. “Sont les mots qui vont très bien ensemble?”

As for film, I love watching Billy Wilder movies. Of course, The Apartment and Some Like it Hot are more well known, but my favourite Billy Wilder comedy is One, Two, Three, a brilliant cold war satire that I return to often. I must say I also really enjoyed Sean Garrity’s new film I Propose We Never See Each Other Again After Tonight, a romantic comedy about a Mennonite man and a Filipina woman set in a frigid Winnipeg winter.

I just finished Once Removed so I’m not too far into another project, though, of course, I do keep writing The Daily Bonnet.

Posted by rob mclennan at 8:31 AM
Labels: 12 or 20 questions, Andrew Unger, Turnstone Press