Nicole Brossard’s work is both thrill and balm – and now, in Avant Desire: A Nicole Brossard Reader, readers can encounter the full range and scope of her trajectory. We have worked to curate selections that will be relevant and, we think, exhilarating to new and returning readers of Brossard’s work, and we have moved across genres and through time, not in a linear way but in a way that fits the always-aliveness of her work. If Utopia seems impossible to readers in 2020, Brossard’s work reminds us that when we gather – either on the page reading, or in rooms together – our co-presence conjures the possibility of Utopia.
Over a fifty-year period, Nicole Brossard has published more than forty works of poetry, prose, essays, and non-fiction. She has broken through the bonds of sexual and linguistic repression, and in doing so has reached across several generations and two solitudes to enchant avant-garde, feminist, and academic readers and writers nationally and internationally, creating a radical, complex, and influential body of literature. It is work that never forgets the importance of pleasure, and that never loses hope in the possibility of Utopia. For the scholar Susan Rudy, Brossard’s writing is comparable to Virginia Woolf in being ‘uncompromising’ in its ‘critique of patriarchal reality, unrelenting in her love for women, and unequalled in [its] aesthetic experimentation.’ Has any other Canadian writer enjoyed the kind of feverish collaboration and translatory attention paid to Brossard? And has any other Canadian writer had the kind of attention that comes not from the established literary complex down but from the ground up? Poets, writers, and translators have taken up Brossard’s work largely as a labour of love. This is quite impressive when you consider that at the core of this fervour is a radial lesbian innovative writer who comes to English only through translation. (“AVANT DESIRE, THE FUTURE SHALL BE SWAYED,” An Introduction by Sina Queyras, Geneviève Robichaud and Erin Wunker)

Sitting at more than three hundred pages, Avant Desire: A Nicole Brossard Reader, eds. Sina Queyras, Geneviève Robichaud and Erin Wunker (Toronto ON: Coach House Books, 2020) is a “selected works” of fifty-plus years’ worth of Montreal writer Nicole Brossard’s works in English translation, from, as the back cover attests, “her best-known writings but also includes hard-to-find interviews, essays, and lectures.” From the very beginning of her work, Brossard’s work has been uncompromising in their experiments with language and form, and engagements with sexuality, desire, politics and social politics, and this new collection attempts to acknowledge the myriad threads of her work through thematic sections—“Desirings,” “Generations,” “The City,” “Translations, Retranslations, Transcollaborations” and “Futures”—a noted difference from, say, a more temporal editorial structure. The book is built as a sequence of threads pulled from Brossard’s translated work, from her numerous books-in-translation to more obscure pieces, including elements included in her prior selected through the University of California Press. The collection offers pieces from published works such as French Kiss, or, A Pang’s Progress (Coach House Books, 1976), Turn of a Pang (Coach House Press, 1976) and Yesterday, at the Hotel Clarendon (Coach House Books, 2005), but also the collaboration “Mauve” with Daphne Marlatt, originally published as a chapbook produced in an edition of thirty copies back in 1987:

Real that of the under-bent
curves of the virtual we take for real
a gap  delayed that-over-there  re
semblance the images repeat
mouth in the feminine, dos€
of sense making a dorsal
commotion 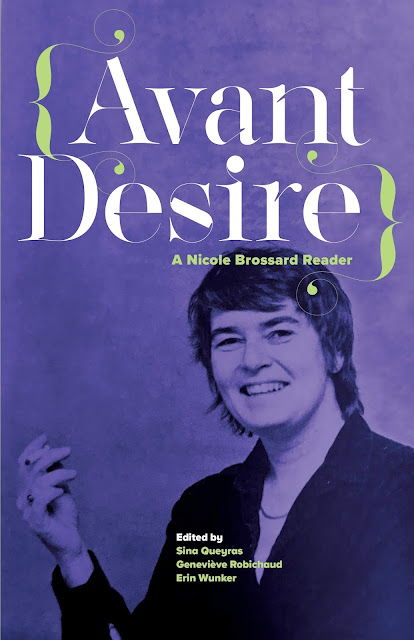 Brossard’s influence on writing and culture can’t be overstated: the ways in which her work has been the forefront of what became a wave of writing engaged with theory and literary form, form and theory engaged with desire, and desire engaged with the politics of gender, sexuality, language and the body; centred in Montreal but rippling out in waves throughout Quebec, Canada and beyond. Her writing has consistently worked to explore boundaries, engaging with questions and concerns that originally exploded across the culture throughout the 1960s, 70s, 80s and 90s. One just has to think of the number of touchstones her work offers, including the incredibly powerful piece she wrote in response to the Montreal Massacre, “6 December 1989 / Among The Centuries” from Fluid Arguments (translated by Marlene Wildeman): “Mysogyny, phallocentrism, sexism, and anti-feminism are four words that could seem to be easily interchangeable. It would be, however, a serious mistake to confuse one for another, for they play very specific but oh so complementary roles when it comes to the alienation, domination, and exploitation of women.” As Lisa Robertson wrote in her introduction to Brossard’s Theory, A Sunday (Robertson’s essay is also included in this collection): “The feminist writers of Montréal have altered their city irrevocably. When women write about and from the cities they live in, they are transforming the material ccity into a web of possibility and risk. The description of the city bends back on itself – it not only represents, it opens up a site for the political imagination. Through the fictive and theoretical act, the city is reinscribed as a space for radical otherness.”

Her work continues to explore the boundaries of what is possible with text, blending lyric with theory, and a retrospective of this sort is, honestly, long overdue. One could imagine how easily such a volume could have been twice as large, given Brossard’s near-constant engagement and exploration through prose, prose poetry, the lyric essay, poetry and works for the stage over more than five decades-to-date. There aren’t too many contemporary Canadian writers who have predominantly been known as writers of prose fiction who have incorporated so many ideas of poetry and the lyric into their work and their thinking (the late Robert Kroetsch might be another example of this), as well as such overwhelming engagements with political concerns, especially early on in her writing career. And yet, every inch of her work could be considered overwhelmingly and thoroughly present, no matter when one might be encountering it. In an interview Catherine Mavrikakis conducted with Nicole Brossard and Nathanaël, translated into the English by Katia Grubisic, Brossard responds:

The French poet René Daumal said, a novel says something while poetry does something. The whole posture is different, certainly in terms of language, and of the tension in language. Because a writer can shift from one genre to another, we can also ask the question of prose poems, for instance. Why not write a poem, why write a prose poem? It’s because prose balances the peaks of tension, whereas the poem always exists because of the tension in meaning, and therefore in grammar, syntax, and rhetoric. It’s always in the present when you’re reading it, and when you write it. Even if it takes six months to work on a poem, you’re always in the present, you are always in the moment. When you read it, too. And you can’t negotiate with a poem, you can’t say, I love this part of the poem. You love it, or you don’t. A novel – you can like parts of a novel, while other parts you don’t like so much, but it’s negotiable. And it has to do with the span of the text, obviously, its length. It really is a different way to relate to the world, to look at the world, and of course another way to live in the present, to experience one’s own present moment in the language, I think.