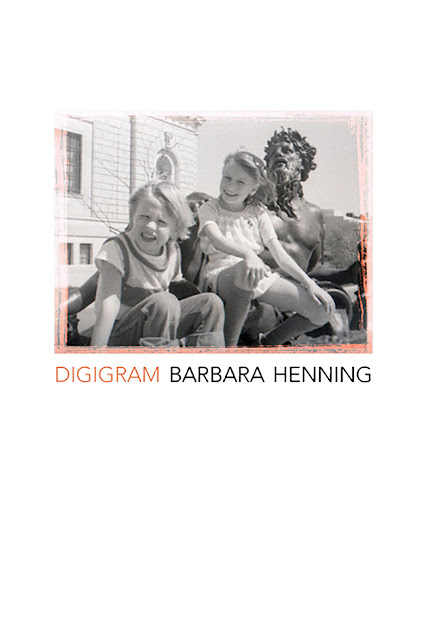 The poems that make up Brooklyn poet and editor Barbara Henning’s latest poetry collection, Digigram (New York NY: United Artists Books, 2020), are built as curious collage-accumulations, quick poem-sketches that stitch and string together a series of connected and unconnected phrases, thoughts, descriptions and ideas. The poems emerge through the accumulation and the rhythms, the immediate thoughts and moments that blend threads of the intimate, the immediate, the domestic and the political, writing about where the dishes came from, walking down Avenue A, overheard conversation, newspaper reports and the emergence of Presidential candidate Donald Trump. As the poem “It All Depends” begins: “—upon a wizened old woman—missing two front / teeth—an old skull cap—big men’s levis—full of holes—a / shopping cart—no tax loopholes—she scowls at me, / then apologizes—trains seem safer than the 80s—I / say—depends on who you are—and where you are—true, / true [.]” The effect of her hyphenated sketches provide an immediacy to her poems, almost a point-form journal-entry effect, comparable to that of New York poet Stacy Szymaszek’s Journal of Ugly Sites & Other Journals (Albany NY: Fence Books, 2016) [see my review of such here]. These poems provide both a portrait of a particular time, and an examination of where we currently stand, threads that continue across 2020 as easily as 2016, 2017 and 2018, when these poems were first composed. The world has changed, but it is still the same world.

What I find interesting, also, as she writes in her “Process Note” at the end of the collection, is that this collection was originally prompted by Body Sweats:The Uncensored Writings of Elsa Von Freytag-Loringhoven, edited by Irene Gammel and Suzanne Zelazo (MIT Press, 2011):

In 2016, I picked up a collection of writing and art by the Dadaist, Elsa Von Freytag-Lorenhaven, also known as the Baroness. I pored over this book, laughing at the way she took William Carlos Williams to task (old observation minted wisdom). She was the ultimate beat/punk artist, scoffing at bourgeois society. Reading her poems, I thought to myself—they are like ecliptic telegrams to the world. At the time I was collecting poetic material from my journals, arranging, rearranging and collaging in news from the days before and around. Meanwhile I felt desperate—as did many others—about the political situation unfolding in the country. Trump had not yet been elected, but the hate on mainstream media was shocking. Then he won the election—how horrifying. Greed, wealth, ignorance and hate arm-in-arm. While I’m nowhere near as anti-establishment or as abrasive as the Baroness, I did pick up on her rhythms and started translating my poems into ecliptic digital messages that I called “digigrams”.