we most resemble is the end of the world.
We are conspicuous, we pluck the strings
of historical association and make another
exclusion. We are a winnowing, a slow tick

of the intellectual pacemaker, a growing edge.
Wait till they get up close. This movement
happened in more than one hundred cities:
Agricola, Bovina, Pomona, Marathon, Akron,

Ajax, Salix, and others extending in a long line
below the wet cloud blanket. (“THIS WORD: I WANT”) 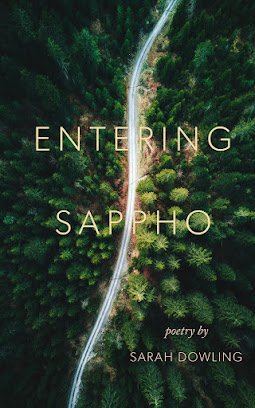 Toronto poet and critic Sarah Dowling’s long-awaited fourth full-length poetry collection is Entering Sappho (Toronto ON: Coach House Books, 2020), following Security Posture (Montreal QC: Snare Books, 2010), Birds & Bees (Troll Thread, 2012) and Down (Coach House Books, 2014). The book-length suite of poems that make up Entering Sappho play off naming, from the community of Sappho in Clallum County, Washington, to the ancient Greek poet, utilizing the Greek moniker upon American soil as a way to open up a conversation around indigenous considerations, erasure and colonialism. What is the impact of one name attempting to overwrite another? As the back cover offers: “Driving along the Pacific Coast highway, you come to a read sign: Entering Sappho. Nothing remains of the town, just trash at the side of the highway and thick, wet bush. Can Sappho’s breathless eroticism tell us anything about settlement – about why we’re here in front of this sign?” The play between this seemingly-incompatible and ancient naming is a curious structure to frame the collection, akin to Toronto writer Margaret Christakos referring to the town of Alexandria, but the one in Glengarry County, Ontario, and not the infamous and ancient Egyptian city, via the title and title sequence of her own debut collection, Not Egypt (Toronto ON: Coach House Press, 1989). It is as though Dowling works to construct an engagement and conversation around Sappho, Washington with all its contradictions and confusions, writing the ghost of a town named after a long-dead Greek poet, but wrapping her conversation intricately around queer identity, naming and Sappho’s few remaining fragments.

Well did they have the hotel at the same
time as they had the store? Yes, it was all

other than dances? Well, in the wintertime
they used to use it to dry clothes, mostly.

It had a big mangle up there, a drying
mangle, they used to mangle the clothes

and sheets and everything. You mangle
them – now, you didn’t have electricity?

No. just rolls about that big around and
about that long. (“ORAL HISTORY”)

Dowling’s Entering Sappho fragments into sections and subsections—“Possession Sound” that includes “Clip,” “Entering Sappho” that includes “Oral History” and “Soft Memory,” “Neoclassical Place Names of North America” that includes “This Word: I Want” and “US,” and “Leucadian Leap,” that includes “Ornament,” “These Things Now For My Companion / I Shall Sing Beautifully”—as well as a prose afterward or coda of sorts, “White Columns.” The shapes of Dowling’s lyrics shift and shimmy, denoting a particular precision of the line and line-break, attempting a large canvas in portions, from archival materials, oral histories and blended mythologies. “You may forget that one day with my little red / girl in my pretty red boots when they came // by mail from Tacoma. I had been cruising out / of my claim. I had been promised roses of Lesbos,” she writes, as part of the poem “US,” “I had turned a pallid pink.” Dowling explores our past and potential future relationships to colonialism and local acknowledgment, even as she writes out Sappho, Washington in all its former glory, ghost-town appeal and queer associations. As her afterword, “White Columns,” begins: