of history, a matchstick lit in the black seam of time.
Or, no, her story is separate

from the whole, as distinctive as each person is distinct
from the stream of people that led

to the one and leads past the one. Or, her story
is surrounded by history, the ambient spaciousness

of which she is the momentary foreground.
Maybe history is a net through which

just about everything passes, and the pieces of her
story are particles caught in the interstices. (“THE GALLEONS 1”) 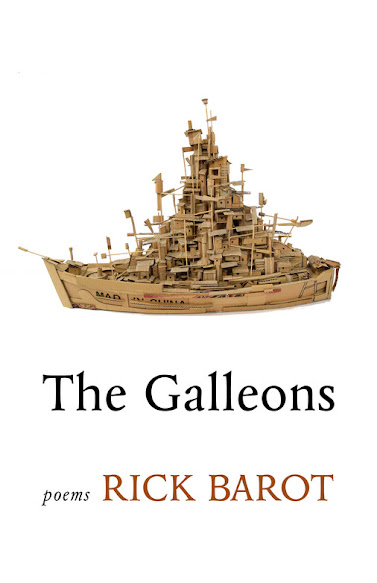 Having only recently discovered Tacoma, Washington poet Rick Barot’s work through his chapbook, During the Pandemic (Albion Books, 2020) [see my review of such here], I was eager to see more of his work, which led me to picking up a copy of The Galleons (Minneapolis MN: milkweed editions, 2020). The Galleons is Barot’s fourth full-length poetry collection, following The Darker Fall (Sarabande Books, 2002), Want (Sarabande Books, 2008)—which was a finalist for the Lambda Literary Award and won the Grub Street Book Prize—and Chord (Sarabande Books, 2015)—which won the UNT Rilke Prize, the PEN Open Book Award and the Publishing Triangle’s Thom Gunn Award. How is it I’ve not heard of his work until now? As the back cover of The Galleons offers: “Barot’s poems are engaged in the work of recovery, making visible what is often intentionally erased: the movement of domestic workers on a weekday morning in Brooklyn; a veteran of the war in Afghanistan, fondly sharing photos of his dog; the departure and destination points of dozens of galleons between 1564 and 1815, these ships evoking both the vast movements of history and the individual journeys of those borne along by their tides.”

Barot’s poems are graceful, expansive and composed with incredible care, moving through and into unexpected places. His poems have the sense of being all over the place, managing a series of collages that each hold a through-line, carefully put together with great thought and care. Consider the poem “STILL LIFE WITH HELICOPTERS,” which moves through a history of a Chinese toy two thousand years prior to Leonardo da Vinci, a history of helicopters, “as many / different kinds of helicopters now as there are // uses for them” to the sounds he hears from the inventory of his desk, including “what the Oakland Police Department helicopter // is doing now, while the protesters swarm onto / the 580 Freeway and shut it down, protesting // the grand jury’s decision in Ferguson, Missouri, / not to indict the police officer who killed Michael / Brown.” The poem is moving, moves and elevates, pulling and piecing together elements that might not connect but clearly do, through Barot’s narrative meditative threads of intimate knowledge, collecting and conjoining information and trauma, loss and heartbreak. The poems in this collection are remarkable for how much Barot manages to contain in such small spaces; over the two or three pages of a single poem, working through his own curiosities and attentions to attempt comprehension. How does the centre hold? How do these ideas piece together? His poems are very much a space of deep attention, attempting to listen and step out of the way, working to understand just what it is he is hearing. As the poem “THE GALLEONS 10” ends:

I had a fate, it took me

across an ocean. It has taken half a life
to turn back and see

what it was I left behind.
I came from teachers and soldiers.

On the island my father comes from,
the people covered their bodies

their teeth to sharp points,
who buried their dead in coffins

Shaped like boats for a journey.
I come from horizons. I come from water.

The through-line of the collection are the ten individual and numbered title poems, running from “The Galleons 1” to “The Galleons 10,” exploring a sequence of ships through a concurrently deep yet sideways glance, writing empire and colonialism. As Jane Wong describes the book to introduce her recent interview with Barot for BOMB, the collection “moves through the marrow of a family’s journey from the Philippines to the Americas—simultaneously widening and pinpointing the trauma of colonialism.” In one poem, he writes on the effects of colonialism and immigration through writing about being attentive about sharing days in New York City with Frank O’Hara poems; there is something rather remarkable in the ways in which Barot clearly tells you about one thing through the lens of something else entirely. Wong’s interview includes:

RB In Elizabeth Bishop’s poem “Over 2,000 Illustrations and a Complete Concordance,” there’s a beautiful line that goes, “Everything only connected by ‘and’ and ‘and.’”  That line pretty much summarizes the research method—if you can even call it a method—that informed my work on many poems in The Galleons. When I noticed something—a bit of information I came across, say, or a bit of visual vividness occurring in front of me—I used that as a starting point to look closer and to look wider, knowing that the trail of connections from one thing to another, from one and to another and, can be intricately strange.

One night, reading in a chair in my house, a flea jumped onto my forearm. This led to me to look up fleas online, which somehow led to re-reading John Donne’s “The Flea,” which then led to some self-pitying thoughts about my shortcomings as a poet. In terms of research that took place on a grander scale, I had the good fortune of getting a Guggenheim Foundation Fellowship in 2016, and this funding made it possible to do research on the galleons and the Spanish galleon trade that I could only have dreamed of without the funding.  I went to the Naval Museum in Madrid, to the incredible silver galleries of the Victoria and Albert Museum in London, and to the National Museum in Manila. In all of these places I came across astonishing things that ended up in the poems.

JW Tell me about one particular astonishing thing as you moved through these museums.

RB The most aching experience during my travels was seeing a portrait of Ferdinand Magellan at the Naval Museum in Madrid, in an exhibit that celebrated the three-hundred-plus years of the Spanish galleon trade in the Pacific. Magellan “discovered” the Philippines for Spain in 1521, which led to Spain’s centuries-long control over the country. The painting of Magellan was not contemporaneous, so it was a speculative portrait of the man, showing him looking grand and wise and triumphant. Still, seeing the ersatz portrait gave me a wave of nausea anyway. I thought of how this one man’s errand set so much in motion—a history that was still rippling five hundred years into the present, with me standing there in front of him, one more speck in that long and painful story.