A banter of scare quotes to antler
Any storm : the angels
Playing marbles, trucks that try to fly

Daughter you need a new landscape
– sodic soil, ablation zone, graffiti
blinging the airport route –
To tuck you in at night, the lavish noir
de zed à a

– Dada what does dead mean is
Dead it’s when you can’t
Come back? 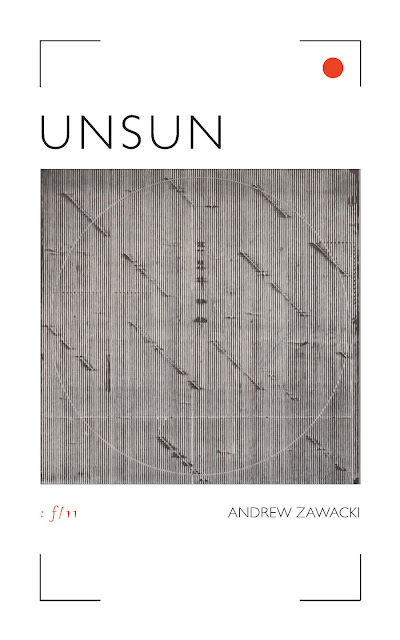 I might have missed it when it first came out, but I am finally catching up with Georgia poet, editor and translator Andrew Zawacki’s latest poetry title, Unsun (Toronto ON: Coach House Books, 2019), a lyric propelled by sound, fragment and cadence, utilizing meaning almost as a means to a end. There is something reminiscent in Zawacki’s poems of the work of Windsor, Ontario poet Louis Cabri through their shared propulsion of sound [see my review of Cabri’s latest here], such as the opening of Zawacki’s “DIXIE PIXIE SONNET”: “Solar panel, a Fresnel lens / Five-pound bag of M&Ms and we could 3-D print a clone of you // Pell-mell all hell and ill will will unfurl / If you don’t wear your cheap synthetic, frilly fuchsia princess dress / Fake glass high heel sequin slippers clacking on the tile // In your lifetime, the Arctic will have been [.]” His lines suggest both precision and perpetual motion. “Everything I say is a meteor shower,” he writes, to open the poem, “STREWNFIELD.” Mid-way through the same piece, he writes: “Half transistor, / half self / my voice is flensed mid- / flight inside the glare between two screen : // a bezelled Citibank tower / in blue and the NASDAQ ticker spitting its intraday / figureds and decimal // squall.”

The book is constructed in numerous sections around shape and sound and image, but what really strikes are the paired sonnet sections, “Sonnensonnets,” collecting eleven in the first “Sonnensonnets” section and eleven more in the further. Zawacki is a master of effectively blending precision and motion, such as the twenty-part sequence “WATERFALL PLOT,” a sequence of poems that pairs each short poem with a photograph, a sequence of what he calls “loose variations” influenced by and responding to works by the eighth-century poet Wang Wei. As he writes in his “NOTES” at the end of the collection: “The accompanying large-format photographs – shot with 4x5 film, to replicate the aspect ratio of Wang’s poems: four verses containing five characters each – were taken at a compound of disused chicken coops in Athens, Georgia. The site has since been dismantled altogether.”

The affect of flatness : in a woods without branches, or
Needles or bark, late sunlight bleaches the shadows to silver –

echo an arrowkeen flexing, no feather – and night is a country
where no one lived, and loved like a language, and left.

In an interview at OmniVerse around his prior collection, Barbara Claire Freeman opens her questions with: “I just read ‘Sever Sonnet,’ a gorgeous and exquisitely sever/e sonnet you published in the spring issue of A Public Space. Re and re-reading it makes me hope that the poem is part of a sequence or book that’s soon to be published. Can you offer reassurance?” Zawacki’s lengthy answer is interesting, in part due to the fact that the poem isn’t yet part of a larger manuscript-length consideration, the not-yet of Unsun. “Daughter is an / Edge, edge / A verb –” he writes, as part of “LIMIT SONNET.” The poems for and from his daughter provide a fascinating pair of sonnet-suites, articulating parenthood in ways I haven’t seen, managing to provide a fresh language into a long-familiar subject, as well as breathing new life into the sonnet-structure, a poetic form that is too often replicated poorly. His response speaks to the early sparks of what would eventually become Unsun:

Thank you for your kind words about that poem. The ending needs rewriting, somehow. But I’m sorry I can’t reassure you just yet! It isn’t included in my latest volume, Videotape, though some of its companions have appeared in or on BOMBlog, Poetry Northwest, a new online journal I’m excited about called Flag + Void, and here at OmniVerse.

The sonnet is one of fourteen—a corona whose ligatures have been altered—that I wrote for, and from, my daughter Ella. Begun when she was just over a year old and more or less abandoned when she was around two and a half, the series was meant to accompany her through her acquisition and nascent deployment of language—or of two languages, since her mother is Parisian and we speak French at home. I’d been seeking a way to stand, or sit, beside her, attentive to her earliest attentions to the world, in order to articulate my experience of what I could fathom of hers. A phenomenology not of speech, then, but rather of listening: my daughter and I composed the oblique lyrics together. Referencing Béla Tarr’s film The Turin Horse or a microwave’s voltage, a Pink Floyd song or ski slopes manufactured in Dubai, are moments that come from my own consciousness, of course. But misquoting The Cat in the Hat, intoning “bye bye,” auditioning the differing pronunciation of the English word “ours” and the French word ours for bear—those are slippages Ella spoke for herself. Even within a language, there were the—I don’t know what to call them—declensions or conjugations or trills of sounds within the same sonic zip code: doudou, for doll or security blanket; dodo for a nap or good night’s sleep; dada, the name Ella still calls me, although it’s not really correct French—and that word refers me, in turn, to Dada, as a sort of principle of ludic elasticity presiding over this elaborate naming game.

I’ve called the suite “Sonnensonnets,” from the German for sun, intending to establish a kind of antagonism, beginning from Derrida’s anxiety—not that he redressed it in Politiques de l’amitié—that the history of friendship in the West has always been a matter of brothers and sons, despite the fundamental role that Antigone might have played in altering that discourse. (George Steiner wondered in Antigones what might have happened had Antigone’s tale, instead of her father Oedipus’s, been identified as the fundamental text of psychoanalysis; but it took Judith Butler to think that missed opportunity through, in Antigone’s Claim.) The other contrary in the title, of course, involves the trope of the sun as central, primary, unifying. In the sonnet you mention, my daughter is done being anybody’s moon. In my mind—and maybe because we’re expecting another in September—daughters are the new sons!