The Mother Contends With the Sky

Dust up, birds wriggle
And we flip
Pictures, and cry

Stars
Reflected with lacrimal reflex
by lysozymic propulsion due to an errant wingtip?

A distant spectral emulsion
Salves the anticipation and solitude
Of tears 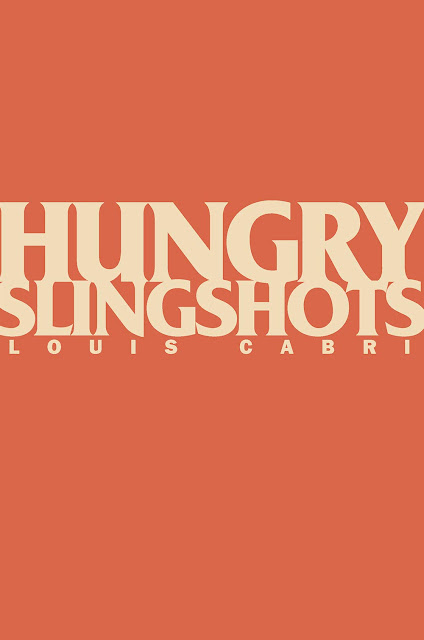 Poet and critic Louis Cabri’s latest poetry title is Hungry Sling Shots (Vancouver BC: New Star Books, 2020). The author of The Mood Embosser (Coach House Books, 2001), Posh Lust (New Star Books, 2014) and Poetryworld (CUE, 2011) [see my review of such here], Cabri’s poetry has long been propelled by sound and theory, making him one of the few language poets so deeply engaged with how a poem sits and sounds on the page. One might mention other contemporary Canadian poets that work so heavily with texts engaged with and influenced by sound such as bill bissett—who engages with sound, image and chanting, but not necessarily theory—and Adeena Karasick—who does engage with theory, but leaning slightly, in comparison to Cabri, on the side of theory over sound. Consider Hungry Sling Shots’ opening poem, “Video Goes Whip Tom Kelly,” a piece that includes elements comparable to birdsong; the poem opens: “one; two; three; four; six / hip; hip; hip hurrah boys; spring is here / chortle-deeeeee // chew-chew-chew / listen to my evening sing-ing-ing-ing / tic-tic-mcgreer // shook-shook-shook-shook-shook / je-je-je-je-je-je-je / pill-will-willet // ra-vi-o-li / kit / cheer-up; cheer-a-lee; cheer-ee-o // whoo-eek / jeeeeeeee / check [.]” As the press release offers: “For Cabri, more than most poets working today, meaning is all about how it sounds.” The distinction there is interesting, suggesting sound over meaning, where a poet such as Karasick engages with more of a blend, or even with theory over sound (the distinction in her work might easily be negligible; the interplay of back-and-forth might instead be the point). And yet, Cabri appears to utilize sound as a way to approach and engage with theory. The second section, for example, is “The Mommy Collection” (from which the poem, above, emerges), a section with the sub-header “After Roses de Noël (1843-1878) by Théodore de Banville.”

There is something of Cabri’s work generally that does tend to get overlooked, in part, possibly, due to a readership that doesn’t quite know how to approach his work, and his work offers no clues but for the work itself (which one argues should always be more than enough): approach on the basis of sound, and see where that might take you. Given the amount of quality work he’s produced over the years, he’s certainly due for some deeper attention.