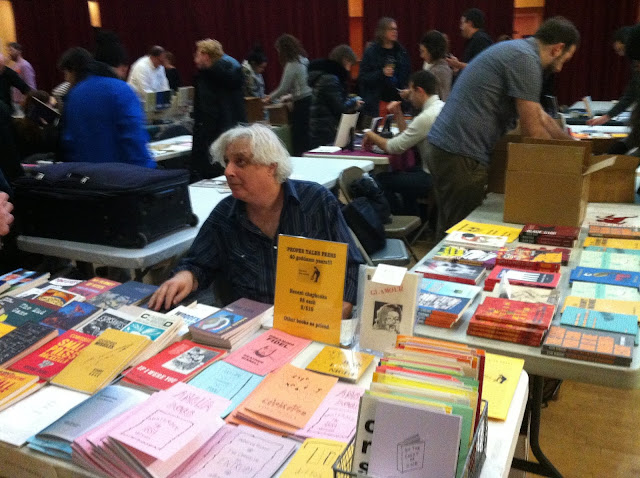 [Stuart Ross at his two-cornered Proper Tales Press + Anvil Press tables, being both "ace" and "trendy"]

Hamilton/London ON: It would seem that, furthering the work they accomplished in their recently-published collaborative trade poetry collection, A CEMETERY FOR HOLES, poems by Tom Prime and Gary Barwin (Gordon Hill Press, 2019) [see my review of such here], Gary Barwin and Tom Prime are still pushing ahead with their collaborative efforts, with the chapbooks Throat Fixtures {an Almanack of Dazzle} (2019) and Birds are the birthmarks of flight: A Manifesto. (2019), both appearing from Barwin’s serif of nottingham. These two chapbooks, each constructed as a single poem-sequence, both read as very different in tone and flavour from Barwin and Prime’s collaborative full-length work, and I’d be curious to hear how their process of writing collaboratively may have evolved since those first few poems, and even up to and beyond that first, full-length collection. What is curious, as well, each poem/chapbook suggest the possibility of the opening sections of much larger, longer manuscripts, although they could both, just as easily, be part of an eventual single collection. The first chapbook, Throat Fixtures {an Almanack of Dazzle}, is composed as a prose-quartet of short pieces, each of which opens with an image (assembled, in part, via collage), and seems to pilfer an antiquated language, allowing it a certain kind of tone, a certain kind of lyrical heft. As the second section, “{Sec2ndo},” opens:

I DO NOT DISDAIN but I dowel. A word fitly spoken is like apples of gold in a setting of silver. Certes, most Reapers receive so much plimsoll tiptapping on the mortal floor as may make worthy the gaseous (0.934%—9340 ppmv) tincture of their perusal, if not too greatcoat or too busy mandraking their small lease. The confrontation concerning the imbroglio of what is here offered to their burdened lexical centipedes; and if the last prove too severe, as I have often been torrid with lichens of a wavelength from 10 nm to 400 nm, a neophyte serving all centipedes equally and on murders of cloud. The Reaper will append the simplest conversation in line as the greengrocer’s to one both laminate and profound.

While the first chapbook has a weight to it, the second, Birds are the birthmarks of flight: A Manifesto., feels lighter in tone; but still holds the attention as both a real and faux-manifesto, as the writing both illuminates and obscures the writing even as it floats through and across a delightful surrealism. As the first section reads:

All birds must wear smoke and be bleak after no more than 12 cloud deadlines. This reinforces their humor and gives them comedy wings in a soft land where the impression of flight is diminished. Younger woodlands need to use 10 birds to process the childminding of eggs wrapped in balaclavas of shadow. This reminds us of the ongoing process where the sky is a cleft oyster, the moon a fluke pearl, and which focuses on the cleaving palate of the watershed and blotch from blotch, blotch from blotch, blotch from blotch. Since the 1970s the feathered truth of a billion birds has disappeared. This is also a start.

London ON: London, Ontario poet Emily Lu’s chapbook debut is Night Leaves Nothing New (Baseline Press, 2019), a collection of eleven poems that appear, on first glance, to be relatively straightforward lyric poems, but are anything but. I am finding myself very taken with Lu’s line breaks, the bends in her narrative through-lines and thought, and her attention to small details. These poems really are delightful, and I am happily startled by them. What else can I tell you?

This ending between your arms & drowning.
Its shape & contour seeping through the train
platform. Don’t worry, I was dreaming
into public. The dream expanding empty
city corridors. Passenger-side, I encountered
ten thousand refracting fish & their march through
stale houses. I was Typhlosion running

naked through an early season. Peach petals
in your hair last February while we skated
on domed lake-ice trembling
for fear of overstep & no bystanders
& dying. Don’t worry. A thorough kiss
still contains loneliness. A love
creasing, another mountainline.