YOU DON’T HAVE TO CHOOSE BUT YOU DO

Would you rather be the sun or the moon?
Would you rather sing like Jenny Lewis
or Fiona Apple? I give you a box from Lithuania
and inside it wind and rain. And beside it
space for another box. This isn’t a nest
but a to-do list I vaguely mention
as if I know what I’m doing tomorrow.
The alarm will go off and I’ll sink
into resignation that light isn’t the ocean
but it almost is. I’ve replaced living
with swimming and reading Anaïs Nin.
I like when she shuts down Henry Miller
for correcting her English, trying to ply her
away from her diary. I read their letters
and imagine them both on Facebook Messenger—
all the dick pics he’d send; her, chatting up
several men at once and never recycling material.
Would you rather be blood or stone?
Would you rather receive or give a dick pic?
be moved or be the one doing the moving?

Between us a storm
and two completely different skies. 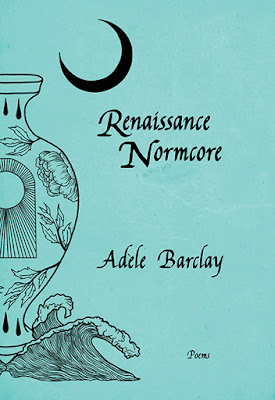 Vancouver poet Adele Barclay’s second full-length poetry collection is Renaissance Normcore (Nightwood Editions, 2019), following on the heels of her award-winning debut, If I Were in a Café I’d Reach Out for You (Nightwood Editions, 2016). Renaissance Normcore is built as an assemblage of smart and even clever lyric narrative sketches that are savage and straightforward in their elegant observations on life and living, love and recollections, and as both portraits and self-portraits. Her poems articulate a series of stories and observations on small town coming-of-age and youthful folly, witticisms and survival. As the poem “SELF-PORTRAIT OF 2018” begins: “a swarm of construction-paper bats / gather dust in an apartment / I moved out of in May / and now my mail gathers / at the foot of a stairwell crowded / with broken bikes, a drum set, / bar stools, garbage bags / of clothes, suitcases, an empty keg [.]” Barclay writes on power, how it imbalances and occasionally overwhelms, and can also be twisted against itself. Hers is a lyric with fine purpose, and that purpose is to allow, and to give, but not give in. As she writes to open the poem “SUDDEN LANDSCAPE WITH INTERIOR JOT”:

God, falling in love
feels like waking too early
having to pee gazing slack-jawed
at a tall landscape—

meaning lives there,
is urgent, almost depends on it

Posted by rob mclennan at 8:31 AM
Labels: Adele Barclay, Nightwood