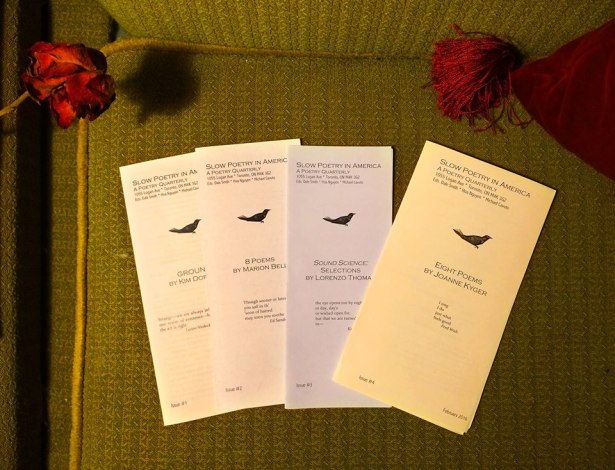 It has been a while since I’ve seen new issues of the Slow Poetry in America Newsletter, a quarterly pamphlet series of poems, each featuring a single author, edited by Michael Cavuto, Hoa Nguyen and Dale Smith [see my review of the first three here; and the second three here; see my interview with Dale Smith on the series here], so I am very pleased to see copies of some of the more recent entries: issue #7: Clearly Present, by Cedar Sigo; issue #9: Góngora, by Hamish Ballantyne; issue #10: Pollinate, From Dark Trees, by Cody-Rose Clevidence; and issue #11/12: Nervous Incomparable Dictation / Curious Spectral Fragments, by Will Alexander (I’m still missing issue #8: Journal for Ted, by Stacy Szymaszek). I’m fond of series’ such as these, the ephemeral nature of the pamphlet working in direct opposition to the strength of the work included, and the possibility of being able to read a self-contained work, and enough work by a particular author to have a clear sense of what it is they are doing, especially as introduction (I think back to Sylvester Pollet’s infamous Backwoods Broadsides, or those pamphlets The League of Canadian Poets were doing in the 1980s).

I was curious to explore the handful of short lyrics in Suquamish poet and San Francisco resident Cedar Sigo’s poems through his Clearly Present (summer 2017). I’m fascinated by the pacings, line breaks and rhythms through these poems, almost existing as a sequence of meditative pings and bounces across the page, as the poem On The Way” begins:

Have the swallows
returned

I may have left it on
through the night

I may have burnt them out

when the wind
shakes
the window glass

On the other hand, Vancouver Island poet and translator Hamish Ballantyne, a founding member (alongside Cavuto) of the pure-sound collective Sex Panic!, is a name entirely new to me. The ten short lyrics that make up his Góngora exist as a curious extension of the author’s translation work (as this pamphlet appears to be an original work, as opposed to a translation), composed as quick lyric sketches around the Spanish Baroque lyric poet Luis de Góngora y Argote (July 11, 1561-May 24, 1627). As the note at the end of the short pamphlet reads: “When Luis de Góngora lost all of his money, his greatest rival Quevedo sensed opportunity, moving quickly to buy the poet’s home and evict him. Disgraced and destitute, more unhinged every day, Góngora fled to his childhood home and began his final book, about the wanderings of a heartbroken stranger shipwrecked on an impossible island. He completed less than half of the work before he died.” Cody-Rose Clevidence’s work is a personal favourite [see their Touch the Donkey interview here; see my review of their latest here], and I suspect POLLINATE, FROM DARK TREES will shape itself into something book-length, akin to what I’ve seen of other of Clevidence’s writing. The poems are sharp, accumulative and densely-packed, composed as small moments of a far larger, more expansive work:

what doesnt bear plums, are cedars
what doesnt grow flowers, are rocks
th columbines cling to th rock-face
where th water seeps a river with a simple
harness, even th sturdy nets cast out let
th bright water rush through, come up
dripping. all fish are bass. th waters
abound with them.

California “poet, novelist, essayist, playwright, aphorist, philosopher, visual artist, pianist” Will Alexander’s Nervous Incomparable Dictation / Curious Spectral Fragments is constructed as a double issue, opening with a longer prose piece, and then a series of shorter lyric poems/prose poems. Having only been peripherally aware of Alexander’s work prior to this, there is an enormous amount to unpack in his incredibly dense and vibrant language, one that writes through human need and detailed, abstract thought to explore the requirements of both soul and body. Even as the opening sentence of the prose poem begins: “BLANKNESS as co-equal to blankness siring initial seismicity by which initial balance is shifted, is ignited beyond its prior capacity so that prior balance engaged can only gift itself by means of vertigo, by seeming ruin that never instigates demise, but opens onto a primordial plane sans replication such as names and dates and habit.” The final poem of his pamphlet, “Closing Commentary,” writes:

As an ignition worker under present planetary circumstance, I remain counter to exteriority as capturable entity. Ignition remains a maze for me. A maze in the psyche without recourse to pedestrian entanglement and its mechanical detritus. Instead language neurologically blazes and condenses as an operatic sundial suddenly spinning. Thus sonic irrigation transpires and becomes material confluence transmuting in their cells. The latter being sound that emanates from one psyche to another via what I understand to be the circular infection where one’s vibration existentially accelerates meta-cellular aspiration so that the latter begins to heighten and transmit a climate that prevails as carking psychic yoga.

Issues are $3 each, and “Subscriptions & contact can be made through slowpoetryinamerica.wordpress.com or mcavuto@gmail.com”