From 2015-2017, I conducted a research-creation project at the University of British Columbia Okanagan called Visual Inspection. “Research-creation” is the term the Canadian academy uses to describe academic research projects with artistic outcomes. Though dressed up as academic inquiry, Visual Inspection was always, first and foremost, an art project conducted by artists.
Originally, the project asked a basic question: If the page is a field of visual composition in contemporary poetry—and it is such a field—how can we as poets make this field available to non-visual learners in a manner that is consistent with our own individual aesthetic preferences? What would we make?
At first this seemed like a translation problem: How to account for the white space and typographic experiments in a poetic composition through audio or haptic renditions? Think recordings of poems read aloud, braille, or even poems printed in 3D according to a particular algorithm. With this wrinkle: How to also appeal to the poet as a poet, to be consistent with the poet’s compositional practice, with the pleasure and realization of that practice? (“Introduction”)

After four poetry titles and a collection of short stories comes British Columbia writer Matt Rader’s Visual Inspection (Nightwood Editions, 2019), a curious book-length prose work of theory and lyric, academic study and first-person ease. Visual Inspection is a blend of theory, poetry and memoir composed in short, self-contained and accumulative prose-sections, reminiscent of recent works I’ve seen by writers such as Sarah Manguso [see my review of her latest here], Elisa Gabbert [see my review of such here] and Stephen Collis [see my review of such here], presenting a sense of openness to both content and form, and attempting to wrap one’s head and one’s thought around the unknown in the only way he knows: through writing. As he opens his introduction, Radar speaks to and through illness, ability and access from the core perspective of his own myriad and life-long health issues into the structure of a triptych of projects between himself, Jordan Scott and Carmen Papalia:

Under the Hampton New Scholars Award, the primary grant funding Visual Inspection, I named two formal collaborators: poet Jordan Scott and social practice artist Carmen Papalia. Both Scott, who has a significant stutter, and Papalia, who is legally blind, had, through close attention, used their bodies as sites of artistic composition.
In one such composition, Scott designed poems to challenge his ability to say them out loud thus creating a collaboration between the text and his body in which his body became a vehicle for endless variations of the poems. In one of Papalia’s works, he has a small marching band follow him through a city playing directional cues as he performs everyday tasks like buying a burrito.
And this too is axiomatic but bears repeating nonetheless: There is no body from which all other bodies might be assessed for deviation. Only the body of our imagination, of culture. Similarly, there is no normal poetry, syntax, grammar or typography. There are only the formative categories cultures practice at any given moment in history. 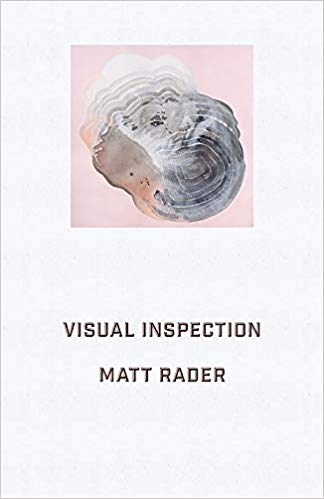 I’m very taken with the openness and ongoingness of Rader’s meditative prose, something I might not have expected, given my (admittedly limited) awareness of his poetry, more of a first-person lyric narrative than something this expansive, and, dare I say, experimental. Rader’s explorations move through access and even include the limitations of such an idea as access, from the notion that there is no standard, singular body from which derivation is compared, to the difficulty of someone with mobility issues being able to participate in Papalia’s blind walking tour. While existing as a stand-alone, Rader’s Visual Inspection is deeply interlinked to the other two projects in this triptych, exploring ideas around each of the three projects and how they operated, and the interplay between them, as even what is seen is changed through being seen at all.

What we see as light and colour is the expression of several relationships: photons from the sun with the reflective surfaces of our environments, with the rods and cones of our eyes, with the neuropathways in our brain.

I read about these relationships in a book on the discoveries of cognitive science and their implications for philosophical traditions.

The book was written by a famous cognitive scientist from the United States and a philosopher with whom I once spoke when I was in graduate school ten years earlier. We were standing before our respective urinals, legs braced in that way that betrays a particular concentration. I mentioned John Dewey’s aesthetic theory. He nodded.

Another word for this kind of phenomenon is coincidence. From coincidence might come something new: colour for example, or this anecdote. Brought together, the elements do what? Collaborate?

Interesting. Wd def like to have a look at this book. Much afoot in Kelowna these days! Thanks for bringing this to our attention.