distant knives are being readied
for leviathan heart meat
unsabbathed, this lossy compression
its goldfronted viscosity
clumsy beast in the mindspidered maze
hyperviolet hyperviolence hyperopulence
multiverse multiplex showing on all screens
a spy in the grindhouse of love 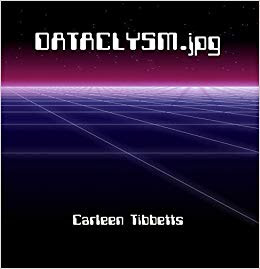 Chicago poet and editor Carleen Tibbetts’ first full-length collection is DATACLYSM.jpg (White Stag Publishing, 2019). Subtitled “Vectors by Carleen Tibbetts,” the full-length DATACLYSM.jpg includes the poems that made up her 2018 chapbook of the same name, produced by Paul Cunningham and Jake Syersak’s r/adio/active c-lou_d [see my review of such here]. While the chapbook included an assortment of twenty-four poems from the numbered seventy-two poem sequence, the final book includes the entire series in order, which makes me curious as to how the chapbook selection was chosen; were they the strongest pieces, in the selector’s (whether author or editor/s) mind, or was a specific thread being excised from the larger structure? I think of George Bowering’s Blonds on Bikes, for example, which originally had the first twenty of the series produced as a chapbook, before the longer, complete series appeared in a trade collection. How were those twenty-four non-consecutive poems selected? Now that I’ve spent some time with the longer version, the suggestion becomes, instead, that the chapbook was built as a small selection to give a sense of the far larger construction. The chapbook was there to tempt you into the book.

For both publications, the threads are similar, and work to articulate the disconnect between information and knowledge, digital presentation and human consumption, and the disconnect between how information is processed versus actually being understood. The effect is deliberately accumulative and quick, pushing a speed and an attention to momentum and detail that suggest the poems would perform quite well at a reading. In an interview posted on July 22, 2016 at Reality Beach, Tibbetts references the manuscript, then still a work-in-progress:

Well, the DATACLYSM.jpg poems are culled from a lot of random language from my journals as well as some wording from advertising spam emails I’ve gotten. The poems are really just about the deluge of information and feelings we endure in this life, but I wanted them to appear as short and visually impacted as possible. Little bite-sized chunks of glut.

Individually, the poems are curious, with one line and one thought immediately following another, and there are times that I wish the pieces were a bit tighter in places, although the looseness allows for a particular mutability of thought, and sound. In her “bite-sized chunks,” I do think she could have gone further with the project, and with some of the poems. The short bursts might want to speak to overload, but could have been far denser, which would have increased that particular effect. Instead, the accumulation exists in quieter, smaller moments: short, self-contained bursts that contain speed, but are slow enough to absorb.