There are poets who experience long and often difficult silences between bouts of feverish composition. There are also poets, versions of this first type, who, while always actively in pursuit of their work, find it a painstaking and time-consuming process of listening, gathering material, pondering, and patiently attending the moment when the words will come out just the way the poet wants. Sometimes these same poets are simply ruthless editors of their own work, who revise and rewrite the same few poems – or same few lines or even words – again and again and again, with microscopic attention, so that what finally finds its way into print (slight as it might be) is as compressed as diamonds. Then there are the polar opposites of these, poets who simply must write, compulsively, on a daily basis – improvisational language machines around whom the pages continually accumulate at breakneck speed, who simply cannot stop producing, for fear they will stop, once and for all. George Bowering falls into this latter category—is, perhaps, its paragon. A “Collected Bowering” would be a massive book – a multi-volume set of doorstops overflowing with six decades of continual, almost frantic practice. But if the book is to be contained within a single set of covers, the editor must make choices. There have been collections of Bowering’s “best lyric poems,” and selected volumes sampling his work across a range of forms and styles. But to my mind his characteristic work has been in long serial and procedural poems: poems premised on the sort of ongoingness that best suits this poet’s propulsive need to continue writing. (Stephen Collis, “Of the Dissolved: On George Bowering’s Serials and Procedures”) 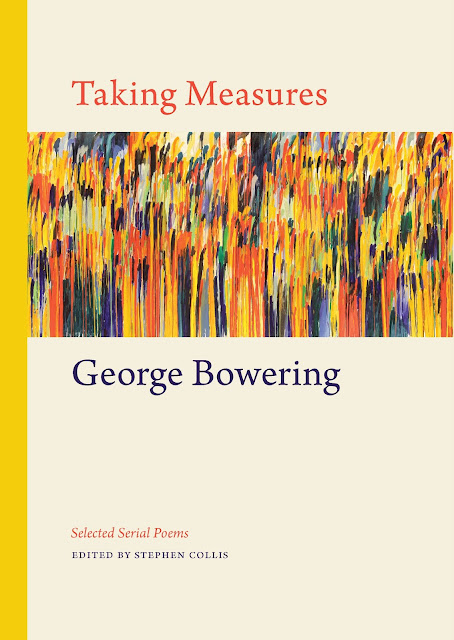 As part of the series of large selected/collected poem volumes that Talonbooks has been working on over the past couple of years comes Taking Measures: Selected Serial Poems by George Bowering, edited by Stephen Collis (Vancouver BC: Talonbooks, 2019). As editor Collis points out in his introduction, Vancouver writer George Bowering has had numerous selected poems over the years – including Touch: selected poems 1960-1970 (Toronto ON: McClelland & Stewart, 1971), Selected Poems, Particular Accidents (Vancouver BC: Talonbooks, 1980), West Window: The Selected Poetry of George Bowering (Toronto ON: General Publishing Co. Limited, 1982), George Bowering Selected: Poems 1962-1992 (McClelland & Stewart, 1993), Changing on the Fly, The Best Lyric Poems of George Bowering (Vancouver BC: Polestar Books, 2004)[see my review of such over in Jacket Magazine] and Vermeer's Light: Poems 1996-2006 (Talonbooks, 2006) – none of which really focused on what Bowering has been long known for: what Jack Spicer tokened the “serial poem.” There are a couple of things worth noting about this, including the fact that George Bowering might easily have the most volumes of selected poems of any Canadian writer, living or dead (save for the late Toronto poet Raymond Souster, who was afforded a many and multiple volume “complete poems” series of books through Oberon Press), and that each of Bowering’s selecteds were assembled by a different editor each time, supposedly all without the author’s input or influence, allowing for a variety of different perspectives to highlight alternate aspects of Bowering’s high volume of output. For this particular volume, it is poet and critic Stephen Collis who has assembled a collection around for what Bowering has been most known for, providing full texts of poems, and occasionally books, including Baseball: A Poem in the Magic Number 9 (1967), Genève (1971), Autobiology (1972), At War with the U.S. (1974), Allophanes (1976), Smoking Mirror (1982), Kerrisdale Elegies (1984), Irritable Reaching (1986), Delayed Mercy (1987), Do Sink (1992), Blonds on Bikes (1997), His Life (2000) and Los Pájaros de Tenacitita (2013).

It’s supposed to be
The beginning of spring.

Eternal concerns vex and charm
the human image, such as

are dust. He, the movie viewer,
supports one George Stevens,

he says American movies, dont
deride them, they are as good

as her European films. Winter
is supposed to be gone, some

of his best friends are American
movie personalities. (His Life)

Given my own Bowering enthusiasms, I have nearly all of these titles on my shelf, but the opportunity to revisit is always worth it, and the poem “Do Sink” has been one of my favourite poems, period, for the cadence, the blend of language and the exploration of family history; worth rereading, and out loud is best. I’m intrigued by what Collis writes in his introduction, furthering a thought from Margaret Atwood, writing:

“All writers keep a double in store,” Margaret Atwood writes, “so they can save the reality for the art, and George’s double was just more obvious than most” (Atwood, 2014, 62). So obvious, he sometimes gets in the way of our actually reading what he has written. I like Atwood’s inversion: the poet as false front for the “reality” of the art. The double Bowering kept in store for his “public life” is the affable prankster know to so may Canadian readers and writers.

While I know that Kerrisdale Elegies is known as Bowering’s ‘best’ work, the book that I have spent twenty-plus years returning to is Delayed Mercy, a collection that moves in slow, sharp turns; reminiscent, as hindsight would allow, of what Fred Wah discussed of the ‘drunken tai chi’ of his own ongoing “Music at the Heart of Thinking.” If, as Collis offers, the poems from that collection were deliberately composed “at two in morning, ‘when my poor brain would be at its most vulnerable’,” these become his own offering of seeing what is possible when he is compromised, and allowing the poems to reveal themselves, and his own subconscious. It is a collection, in my mind, woefully underappreciated, in part, perhaps, due to the long shadow of Kerrisale Elegies, published three years prior. The attentions and cadences of the poems are very familiar, and return numerous times throughout Bowering’s work, from Do Sink to My Life and beyond, with the now familiar “fr” appearing before each dedication, managing both “for” and “from” his intended target:

Like radio signals from frantic planets
your thoughts seek a place in the world,
your thoughts & mine. What am I
thinking of right now, Paul Newman
looking like a father.

An orange cat
held in the arms over the shoulder
of a woman growing steadily
more beautiful.

Cats dont think, their expressionless faces
turn from side to side, feral machines
like heartbeats going forever.

That’s how short
the temper is, that’s how hard the steel is,
the mind trying to get my attention right now.

Like radio signals from frantic planets
everything comes to an end, you say.
Did you ever see dirt on the ground
come to an end? Thought is dirt.

Signals are illusions, cats pretend
they can see them. They cant see anything
but food, shit, water, furniture. They
are simply lucky enough to make people think
they’re beautiful.