Edward Smallfield, to whom it may concern

at the back
of the alley

you are going south
looking for a drinking

I am going north, looking
for the source of the chill

this north which is central
the mist that erases itself

unseen ocean
ships on it

calling hoarsely
throughout the night

I was very pleased to see a new book-length poetry title in my mailbox recently from American poet, editor and publisher Edward Smallfield, his to whom it may concern (Berkeley CA: Apogee Press, 2019). The book is structured in three sections—the suite of short lyrics, “americana” (which appeared as a chapbook through above/ground press), and two sequences of short, accumulative fragments: “evening with photograph album” and “to whom it may concern.”

Smallfield, a poet and publisher who relocated to Barcelona from California along with his wife, the poet Valerie Coulton, in October, 2004, is also the author of the full-length collections Trio (Specter Press, 1995), The Pleasures of C (Apogee Press, 2001), One Hundred Famous Views of Edo (a collaboration with Doug MacPherson; Battery Press, 2003) and equinox (Apogee Press, 2011), as well as a handful of chapbooks, both single author and collaborations.

I’ve always admired serial poems, but it took me a long time to understand how I could write them. Because I believe in absolute freedom in writing, I don’t force myself to write around a subject or theme. I love to write, so of course I write a lot. When I look back over what I’ve written, the most interesting poems invariably group themselves around the same concerns. I don’t think this is mysterious; it seems inevitable that the most vibrant writing would be awakened by what obsesses me most.

The through-line of his poems bend, ever so slightly, akin to a guitar string, bending the sustained note slightly higher or lower in tone. As part of the first section, he includes the poem “ars poetica,” a poem-as-poetics that, itself, riffs off the work of the late San Francisco renaissance poet Jack Spicer, specifically the second part of “Seven Poems for the Vancouver Festival,” from his Book of Magazine Verse (1966); Spicer’s original poem includes:

The Frazier River was discovered by mistake it being thought
to have been, like all British Columbia,
Further south than it was.
You are going south looking for a drinking fountain
I am going north looking for the source of the chill in my bones. 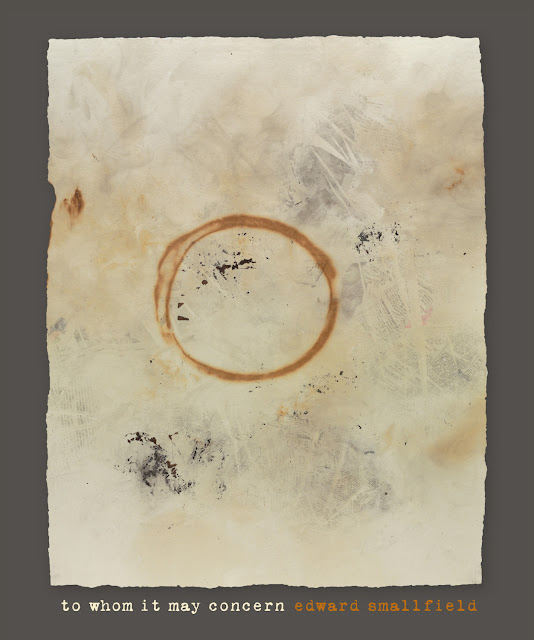 I only know this, of course, because I look this same passage up every decade or so, having the same phrases caught in the back of my own head. As Smallfield writes as part of his 2016 “Spotlight,” directly referencing the poems “the narrow road to the deep north” and “folk,” both of which appear, also, as part of the first section of this new collection:

After living outside the US for a number of years, I found my writing returning to explicity ‘American’ themes. This wasn’t a deliberate choice; I was recovering from an illness, and taking medications, so my writing was under even less conscious control than usual.

The poems that emerged now seem a reflection on my home country from afar, or at least from a distance within myself.

All of the poems were written before the recent election. I’m relieved about that — otherwise, there would have been more bitterness and anger, and far less distance.

The second section is the poem-sequence “evening with photograph album,” a poem that is most likely exactly what the title suggests, as he writes around photographs of grandmother, and other elements of family history and histories, perhaps an extension of what he offered as a return to themes, and to a country he no longer lives in (I am curious at some of the writing he has done since “the recent election,” and if the distances he speaks of have shortened). This accumulation of fragments on his grandmother is a poem curious, in part, for its extended use of the ellipses:

…that my grandmother’s story ended with her…that my mother, for all her love, could not know it…how could two women so different from each other ever understand each other…

…that the father should appear only obliquely…

…that this morning you are at the end of winter…

…that this afternoon I am in the end of summer…

The third poem-section, the title section, is a poem that experiments with empty space, one not as patiently frenetic as the work of Sylvia Legris or Jessica Smith, but as a meditative pause and calm far more prevalent than much of his other work, writing:

What is interesting in Smallfield’s work in this collection is in how the shapes and themes do form as the book progresses, even as the structures, in certain ways, pull themselves apart, accumulating as much physical space between lines, words and thoughts as what can’t be seen. It is as though the poems in this collection work to look back at that past, and that past self, attempting to bridge that geographical and temporal distance, while at the same time firmly establishing himself (the whom of the title and title poem he is most likely writing to), both author and individual, in his particular time, and in his particular place.

Posted by rob mclennan at 8:31 AM
Labels: Apogee, Edward Smallfield