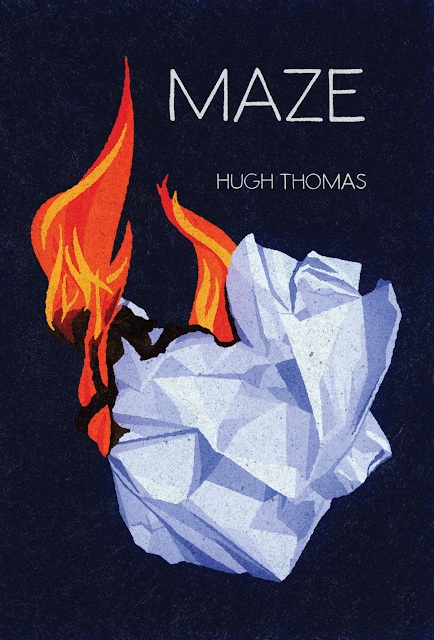 Montreal poet and mathematician Hugh Thomas has been publishing long enough that one might be forgiven for not realizing that the newly-published MAZE (Picton ON: Invisible Publishing, 2019), a collection of “Intentional mistranslations that meander through the maze of language,” is actually his first full-length trade poetry title. Why did this take so long to happen? For anyone following Thomas’ work, including multiple chapbooks through above/ground press, Book*hug, shreeking violet press, Double Negative and Paper Kite Press (among others), it would appear that MAZE has been compiled and collaged from the length and breadth of his publishing history, with some poems more recent, but others going back over decade or more.

Moving from mistranslations to the rare straight translation to translations from languages he doesn’t understand (nor look up), the poems in MAZE, as the title suggests, articulate a navigation through language and languages, deliberately allowing for misunderstanding, and the opening up the possibility for what might otherwise be impossible. “The Lord is my sherbert,” he writes, to open “Twenty-three Plus Seven”: “I shall not want.” Thomas’ poems, many of which are short, and quite condensed, employ strains of surrealism and humour akin to the works of poets such as Stuart Ross, Alice Burdick and Gary Barwin, but with a more overt collision of elaborate and absurd improvisation, one that closes in on both language poetry and the nonsense poetry of Edward Lear. “Enough time sent me knights on horseback with chocolate-covered strawberries,” he writes, in the poem “Unsigned City,” a mistranslation of a fragment of Italo Calvino’s Le città invisibili: “and I was overwhelmed by a fear of intimacy. In this city you must wash your hands before eating, persuaded by the bells from the mountains, selling a new day and its fruits. A strange rover knows many fine things and follows his premonitions to the most capricious sales.” While Thomas certainly isn’t the first poet to work with mistranslation-as-translation—poets over the years have included bpNichol, Ross, jwcurry, Barwin and multiple others—his work is striking in part due to how much of his output is based upon this deliberate sequence of misreadings and misunderstandings. In her essay “‘The Boundless Chaos of Living Speech’: On Homophonic Translation,” an essay posted online at Numéro Cinq in October 2012, alongside a poem by Hugh Thomas, Sarah Bernstein writes:

Faced with the always already note-imperfect “translation,” poets like Hugh Thomas explore and experiment with forms of “naïve translation.” Thomas, poet and professor of Mathematics at the University of New Brunswick, says that homophonic translation “fits into a spectrum of naïve translation… when you sit down with a text in a language you don’t really know, and try to produce a ‘translation’ of it.” In other words, the phonetic features of the original work are more or less preserved. There will inevitably be some words “whose translations might be clear,” says Thomas, “and then guesses guided by false cognates, parts of words, random thoughts, and also sounds.” Homophonic translation, or macaronic writing, is often associated with Oulipo writers like François le Lionnais, who wrapped up one of his manifestoes with a translation of Keats: “A thing of beauty is a joy forever” became “Un singe de beauté est un jouet pour l’hiver.” It’s a useful writing exercise for students learning to navigate metre and meaning, and it yields clever results in contests, such as the ones created and published for contests in Numero Cinq Magazine’s early years.

While MAZE might be his first solo full-length work, Thomas was also one of the authors of the book-length Franzlations (Vancouver BC: New Star Books, 2011), a three-poet collaboration that played with translation and mistranslation, moving in an entirely different direction from the current volume. Subtitled “[the imaginary Kafka parables],” Franzlations  was  composed alongside Craig Conley and Gary Barwin, and “takes the parables and aphorisms of Kafka as a starting point and steps a few places to the left in order to reinvent them.” While Franzlations focused on the work of (obviously) Franz Kafka, MAZE is composed from a mix of works, languages and styles, and is more interesting for the variety, composing poems from works by Adam Zagajewski, Harry Martinson, Tomas Tranströmer, Carlos Drummond de Andrade, Anne Tardos, Sappho, Frederico Garcia Lorca, Erín Moure and Georg Trakl, and from languages including Swedish, French, German, Irish, Romanian, Japanese, Korean, Nynorsk and Italian. Even more entertaining, the sequence “He Said” are translations of eight poems “back into English of translations into Nynorsk by Dag Straumsvåg” of poems by Canadian poet Stuart Ross, taking the element of translation even further. As part of this odd and semi-familiar sequence, Thomas’ shifts the title of Ross’ “Road Trip, Southern Ontario, 1999,” for example, into “Ontario Vacation Pictures, Sorry.” Through the delightful gaze of Hugh Thomas, the poem now opens:

My father and I
exchanged eyesight.
A so-called breeze tousled
the lake’s thin grey hair.

this review originally appeared in Vallum 16:2