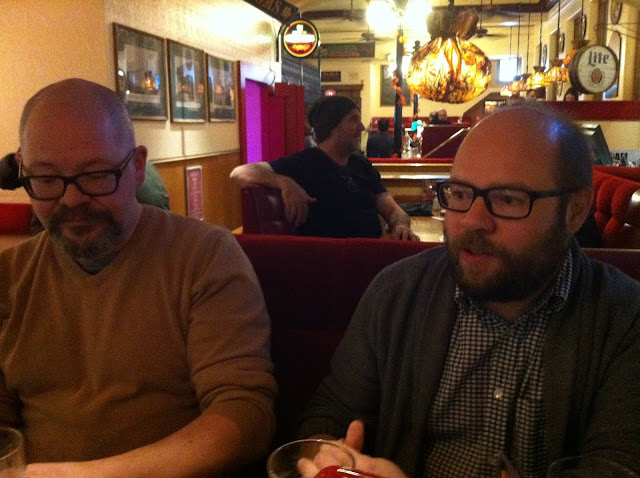 [post-fair drinks with Andy Weaver, Ryan Fitzpatrick and (out of frame) MC Hyland]

Toronto ON: From Jim Johnstone’s Anstruther Press comes The New Alphabets, a collection of centos (a structure, in case you are unaware, built either in part or in full via the lines of others) by Virginia Konchan (who also had an above/ground press title earlier this year). Over a dozen lyric theses that utilize phrases-as-prompts from an array of poets, thinkers and philosophers, Konchan’s meditations are curious in how she fills in the distances between thoughts, between points; jumping from point to point yet including the details, even through this system of selected and assembled collage. And is this volume, composed via a sequence of prompts, singularly a self-contained chapbook unit, or the opening salvo of a potential full-length manuscript?

Name me transient, name me obligatory.
Name me hindsight, name me plenty.
The theme of this place is savagery.
The river’s mouth needs something.
It’s a drama. An interrogative sentence
wells up inside me. Have you grown
accustomed to a lifestyle
no one can provide?
She had no need of fox furs.
She had ceased to exist.
No one ever asks whether flowers
should be permanent.
I should be permanent.
Name me lost wages.
What does it feel like
to have a voice that carries
without making a sound?
Count your fingers.
Count your calluses.
Count the miles to the state line.
I will sign my name in Cyrillic.
I will shut my eyes like a sad man.
Name me modesty, name me vexation.
They said it would hurt, and it does.
This is the black, shot with blue.
Count yourself among the counted.
That spark reminds me of you.

Hamilton ON: From Okanagan, British Columbia poet kevin mcpherson eckhoff comes an excerpt from BABYLON AD PROPHECY (2019) produced through Gary Barwin’s serif of nottingham press. As the note at the offset of the small chapbook informs: “This version of F. Scott Fitzgerald’s short story ‘Babylon Revisited’ renovates the punctuation, spacing, and capitalization of the original story, but not its letter order.” As with many of eckhoff’s projects, this is both fascinating and extremely odd, a delightful twisting of something familiar (in this case, the cadence and narrative of straight prose) in such a minor, yet foundational, way that accumulates into something unrecognizable, and entirely new. How is it eckhoff keeps discovering new ways to refresh perspective? Although I would love to hear him read aloud from this, in part, simply, due to how difficult it might actually be. As his story opens: