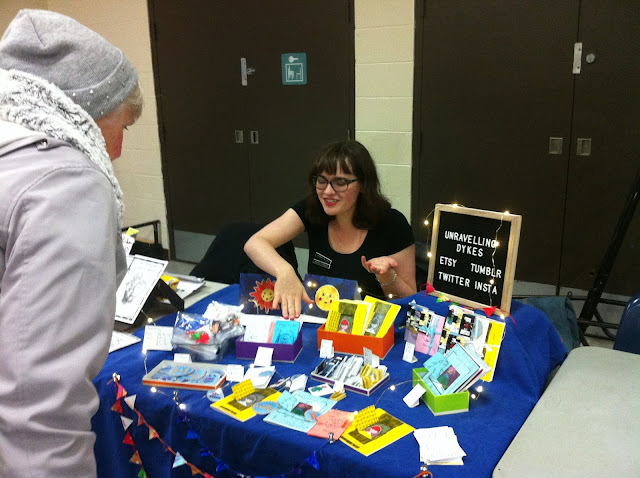 It seems strange to have actually attended three small press fairs this season [see my most recent post on the Meet the Presses Indie Literary Market here; my posts on the Toronto International Festival of Authors’ Small Press Market here], with the third of the trio being the 25th anniversary of the ottawa small press book fair! I really am quite baffled at how we managed to make it to a whole quarter-century (I mean, really). And you saw my recent post on who came to our first fair way back in October, 1994, yes?

Ottawa ON: From Ottawa’s Coven Editions comes Grimoire (October 2019), a collection edited by Coven co-publishers Mia Morgan and Stephanie Meloche [see their '12 or 20 (small press) questions' interview here] in an edition of sixty copies, and offer an assemblage of work that one might suspect, given both publisher moniker and chapbook title. The small collection features the work of a number of familiar names, including Ariel Dawn, Allison Armstrong, Ellen Chang-Richardson, Erin Emily Ann Vance, Nisa Malli, nina jane drystek, Emily Coppella, Samantha Godwin, Manahil Bandukwala, Vivian Wagner and Helen Robertson. Victoria poet Ariel Dawn, for example, is a name I’ve seen increasingly over the past few months (two different editors, for example, included works of hers in my journal G U E S T [a journal of guest editors]), and I’ve been quite taken with many of the prose poems I’ve seen of hers so far.

For her part, Ottawa poet Manahil Bandukwala’s work has been gathering a steady momentum for some time now, collecting publishing credits and even the occasional prize [see her 2018 “Spotlight” appearance here], all of which make me curious to see each new step as it reveals itself. Erin Emily Ann Vance, also, a poet with a chapbook produced through Coven, as well as a newly-published novel, has a piece inside the new issue, a piece that slowly unfolds as both direction, offering of hope, and potential warning:

Steal the pews from the church that refused to baptize you.
Build a large box
and a smaller box
and then a box the size of a twin bed.
Place them together like matryoshka dolls.
Line the largest box with parish newsletters,
the smaller box with alter boy entrails
and the smallest, line with the blanket of your great aunt
crocheted upon hearing of your birth.

Here, you are safe.

Although one of the most interesting poems in the collection has to be “IN A CANDLELIT ROOM, a spell for when you don’t know who to call,” by Ottawa poet nina jane drystek, that includes, at the end:

hold the cup tight and drink

recite seventeen times:
for this i am this

Coven, it would seem, is very much aware of emerging poets (with an editorial preference to the first-person narrative lyric) and offering support, providing an opportunity to learn the names and the works of young writers on their ways to doing some very worth things; so, doesn’t this mean, in turn, you should be paying attention?

Ottawa ON: The afternoon immediately following our small fair, Ottawa poet Michael Dennis did a house reading with Cobourg, Ontario poet, writer, editor and publisher Stuart Ross, and their host, Alexander Monker, even produced a small item for the occasion: 8 Poems (Sunday Afternoon Poems), “Published on the occasion of a reading held in Ottawa on November 24, 2019.” I’ve always liked the idea of a small item produced in a limited quantity for the sake of such occasions (Ross has been producing single-poem leaflets for similar occasions, through his Proper Tales Press, for a very long time), and this small and charming chapbook allows for the intimacy of a house reading in published form. The collection, wisely, opens with the recent tribute Ross wrote to the late poet Nelson Ball, composed “for, after, and with Nelson”:

Nelson and I
sit facing
each other
in silence

I get up
put a kettle
on the
two-burner
stove

the kettle
rattles
I pour myself a tea

we cover
a lot
of ground

With this small collection of two well-published poets and long-time friends, four poems each, the overlap between their writing becoming more obvious, more pronounced: the observational commentaries, and the unexpected twists (something, obviously, less overt in Dennis’ work than in Ross’, but still there). I’m disappointed to not have made the event, and had we not the sixth birthday party for our Rose on the same afternoon, I would certainly have been at this reading.

the lightning staggered across the sky
the sky carved its initials into itself
into itself the glass of water poured
water poured into my basement, destroying my books
my books are all about emotions
emotions are often sold by the pound
Pound turned to skywriting antisemitic slogans
antisemitic slogans can win you free pizza
you free pizza from rusting cages
rusting cages hold your most tender thoughts
most tender thoughts are insincere
insincere is the dolphin that buries the coffin
the coffin contains a banjo and a banjo-playing duck
playing duck is a worthwhile occupation