Visually, the poems of The Odyssey performs an inversion of the cosmos, in which pinpoints of light disobey the dark veil of space. The poems become dark constellations of words suspended in a void of light, cryptic maps that guide the eye through celestial labyrinths conceived by the all-too-human impulse to seek patterns in chaos. In print, the typewritten text of the NASA source document, legible but slightly decayed due to the state of the documents at the time of their digitization, showcases the odd distressed or cracked letter. These weary glyphs call to mind the concrete poetry of derek beaulieu, who fashions textual sculptures out of scraps of letraset. Conceptually, the text performs elegiac calls to Apollo, the god of poetry, and Luna, the goddess of the Moon, who dwell in the empty spaces of the page. These poems portray Apollo and Luna as allied alien deities who consume interstellar conquerors whose voyages favour dominance over discovery. The book likens the experience of the reader of erasure to that of an astronaut, exploring a void whose minimal matter must be clung to for survival. The eye, as it migrates from letter to letter, must rely on the vectors established by the positioning of the letters, a navigation of space that the poems themselves acknowledge and comment upon. As the days of the Apollo 11 mission progress, the poems comment upon encounters with unearthly beings, conspiracies surrounding the original footage of the mission, and the sublime and humbling experience of exploring a cosmos that our human bodies struggle to grapple with despite extensive technological assistance. (“”SPACECRAFT,” from “SPACE ADMINISTRATION”) 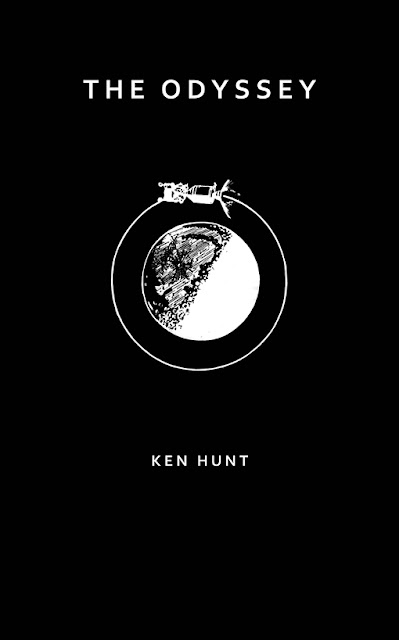 The third in a trilogy (or perhaps ongoing exploration) of works that explore space travel via language poetry, is London, Ontario poet, editor and publisher Ken Hunt’s erasure project The Odyssey (Toronto ON: Book*hug, 2019), following on the heels of Space Administration (2014) and The Lost Cosmonauts (Book*hug, 2018) [see my review of such here]. Given his next title (announced some time ago) is The Manhattan Project (Calgary AB: University of Calgary Press, 2020), I am curious to see how that project connects to this current work; potentially through the composition of works that each explore and engage archival materials around scientific projects and advancements large enough that they became cultural touchstones: the moon landing, the ‘space race,’ and the development of the nuclear bomb that punctuated the end of the Second World War. As Hunt suggested as part of his 2018 interview at Touch the Donkey, he has been composing poems that connect to “my continuing interest in writing poetry that responds to the sciences. I suppose the poems (or rather Project Blue Book as a whole) are similar to my forthcoming manuscripts (The Lost Cosmonauts, The Odyssey, and The Manhattan Project), in that each book represents a link in a kind of chain of texts that I’m in the process of producing. In addition to pursuing a PhD thesis that investigates examples of related works of poetry from the latter half of the 20th century to the present, I find myself compelled to add my own works to the canon as well, in order to address subjects that haven’t yet received the level of poetic attention that I think their continuing sociocultural impact warrants.”

As Hunt writes, The Odyssey “performs an inversion of the cosmos,” but his constellations exist as a stunning array of lyric threads spread out across these white pages, writing: “listen // to // The temperature // drop //// a second // of // air // in // an orange dot [.]” As Homer’s Odyssey is a sequel to the Iliad, during which Odysseus seeks a way back home (after angering the god Poseidon), Hunt’s The Odyssey explores multiple designations of space, from physical space, emotional space and the space across the page through the erasure of the Apollo 11 transcripts. Removing details and technical language, Hunt pinpoints and highlights a sense of meditative solitude through any exploration beyond earth’s atmosphere, as well as the possibility of how writing can’t help but create something tangible within that impossibly-large emptiness. Through salvage, Hunt has both discovered and invented a calligraphy of the solitude of Apollo 11’s exploration, and the sheer magnitude of that same space. As he writes: “to reach the earth // we // read ////between // coordinates // in       a // crater [.]” Through Hunt, the crew of the Apollo 11 not only explore, but seek their finally way home.