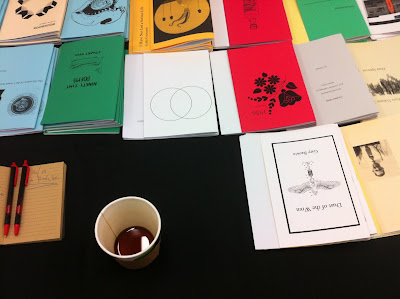 Thanks to Kate Siklosi, I recently participated in the first ever small press fair organized through TIFA (the Toronto International Festival of Authors, an event formerly known as IFOA: International Festival of Authors), carting an assemblage of new and recent above/ground press items to fill an entire table at Harbourfront Centre (they even provided tablecloths! Classy). It was a grand event! There were nearly a dozen exhibitors, lovingly curated by poet, editor and Gap Riot Press co-publisher Kate Siklosi, including Baseline Press, Simulacrum Press, Invisible Publishing, Augur Magazine, serif of nottingham, Anstruther Press and Proper Tales Press. After our small fair, I was even able to on-stage participate in a panel discussion on small and smaller press that Siklosi moderated, alongside Dani Spinosa, Stuart Ross and Terese Mason Pierre.

There are two further fairs over the next few weeks, in case anyone is so inclined: Meet the Presses in Toronto on November 16th (which I am most likely attending, dependent upon Christine’s health and energy) and the 25th anniversary event for our own ottawa small press book fair on November 23rd (and pre-fair reading the night prior, at the Carleton Tavern by the Parkdale Market). Might we see you at any of these?

Here are a couple of items I picked up during that TIFA event:

London ON/Vancouver BC: I picked up a copy of the eagerly-awaited chapbook debut by the remarkable Vancouver poet, editor, interviewer, writer and critic Isabella Wang, On Forgetting a Language (Baseline Press, 2019). I even managed to snag one of the final copies of the first edition (produced in an edition of eighty copies, the chapbook has already gone into a second printing). Composed, as she writes in the acknowledgments at the back of the collection, “in my last year of high school, from September 2017 to August 2018” (yes, the author has yet to turn twenty years old; deal with it), the poems in On Forgetting a Language present a clear, narrative lyric, one that shows an impressive confidence and capability.

You thought you’d be happy
now that you are doing fine.
This past summer in bed
you pictured yourself falling
out of an open window
to nowhere—your first summer
spent away from home.
She said she wouldn’t watch you
throw your future away,
waste seventeen years of
thankless upbringing
on the impracticalities of writing.
If you are going to do it, she says,
leave. So you did.

And anyway, she tells you,
you’ll never find work as a writer. (“MOTHER EXPLAINS MEN”)

What becomes curious through the process of this collection is in being already aware of a small handful of her poems composed since the pieces presented here, and her writing is already quickly improving in leaps and bounds (there was a ghazal she wrote a while back that I was particularly taken with, for example). If you aren’t paying attention to and supporting the work of Isabella Wang, you won’t have the opportunity to delight in the strength and the vibrancy of her writing, and a curiosity exploding in every direction that has already accomplished a great deal.

Cobourg/London ON: As part of Proper Tales Press’ 40th anniversary year comes London, Ontario writer Amelia Does’ latest, AMSTERDAM: THE ABBA VERSION (2019). Does is a new author to the Proper Tales roster (see her essay on the press’ anniversary here), but has self-published three prior titles as well.

Me with you
in the fields
dark clouds
hanging moon

There is an odd straightforwardness to this collection that is delightfully bent, and often moving in more than one direction simultaneously. Her poems move easily from the short lyric to the short prose poem, each propelled by a particular kind of narrative that might bend or twist, or break off at the end.

TRUE TALE OF TWINS AT THE WEDDING

A set of short, long-bearded, alcoholic twin brothers lived in my building. Well, one did and the others elsewhere. I heard tales of their ramblings. Once they were invited to a wedding in a small rural hotel. They started the evening drunk, before the reception. Soon one fell over. The other dripped with beer.

Soon they were forced to leave, and placed in a hotel room next to the banquet hall. Soon they got angry, and started to toss bottles. Soon one broke through the wall, back into the party, with a table let; the other, a chair.

Toronto ON: From Gap Riot Press comes MLA Chernoff’s latest title, the joyfully confident TERSE THIRTY AND OTHER KISSES (2019), following on the heels of their debut, detet this (Hybrid Heaven, 2018). The poems here are wild, deliberately pilfering, breaking apart and reassembling Charles Olson’s work as their own, existing as both satire and savage critique, composing something new out of the old. There are some incredibly vibrant fireworks across the full spectrum of Chernoff’s performative lyrics, one that exists as a response to a prior work, and a poetics that was seen, for a very long time, as radically new and different. Chernoff responds to this work in a new way, easily, seeking out their own position and newness in such an overworked and overwrought space as literature and poetics, and they may just have found it.

Pometics are not manifested into manifesting toes: we don’t want Nietzsche’s Warhammer 40K collection; we don’t want Kant’s hands because they’re so dry from Purelling themselves all the dang time that they don’t even exist and it just sounds like a bit too much unpaid emotional labour for our liking; we don’t want Hegel’s dirty feet because wow just wash ‘em urself, mate; most of all, we only kinda want Marx riding a donkey at some Occupy event in ’08, but mostly, we desire the donkey’s life story and a few hyperlinks to some hot pics that the donkey feels comfortable sharing with us in encrypted group chat after the revolution: it’s neither a utopia nor a Cocteau Twins-scord Fruitopia commercial—perhaps heaven and Las Vegas.