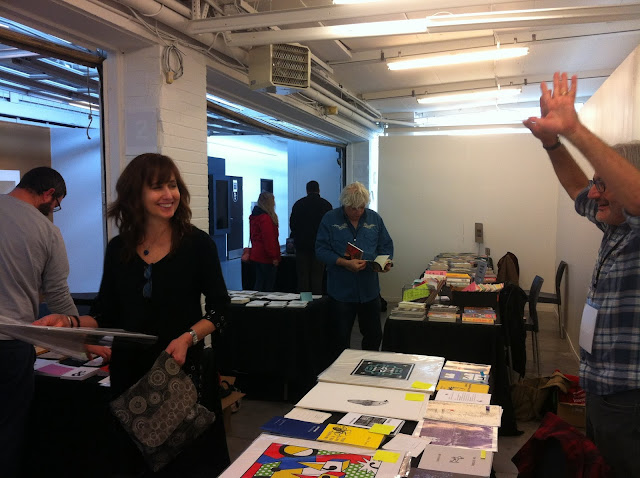 See my first post on what I collected at the fair, here (it was a good fair!). And might we see you at either of the upcoming fairs, whether Meet the Presses in Toronto on November 16th (which I am most likely attending, dependent upon Christine’s health and energy) or the 25th anniversary event for our own ottawa small press book fair on November 23rd (and pre-fair reading the night prior, obviously)?

ON/Fredericton NB: From Jim Johnstone’s Anstruther Press comes the chapbook debut culminate / knot (2019) by Brooklyn Park MN poet and musician (currently studying at UNB) CL Johnson. The chapbook culminate / knot is made up of two poems—the three-sectioned “physical media / gravities,” and the fifteen-sectioned “multum in parvo for my fitness pal.” I am very taken with the cadence of these poems, how they roll and flow and patter across an impressive density of form and language. As the first section of the first poem reads:

Single file up the stairs and through a narrow doorway, everybody came together, loitered on cement. They listened for the whistle, plotting wild-eyed critieuqes of patience, birdcall, depth, and tongue. They cannonball’d, and bottomed out, beluga whale’d through carbonated teal. Their lexical Atlantic with cape and bluff enmeshed, the tile coast unititing see with sea, with seethe, with scene, with seamless. And through a duct, they swallowed seethe because perception to their vessel bound a suffocating tide, and seamless, for that tide also crawled on deck. Scene and sea included, each, a movement sure to nauseate resemblance. When stairs confirmed exhaustion was a shadow on the atmosphere, their diving board and strand of flesh, that vision skewed —

It was the summer of 1966, you probably weren’t born yet, and I was travelling in a new Volkswagen beetle with the sweetly evil poet David McFadden, eastward in southern Europe. It was the first time either of us had been in the old world, so we were taking advantage of the opportunity to transform our young Canadian lives into legend. He was carrying a book of poems by Charles Baudelaire, and I was carrying an anthology of notable works by English poets. He kept looking up things in my book because, as much as he adored Baudelaire, he could not read French.

And so begins Vancouver writer George Bowering’s DAVID IN BYZANTIUM (Proper Tales Press, 2019), a short travelogue through Europe from his travels with the since-departed David W. McFadden. In quick prose, this is a charming series of recollections that blends the lyric with the historic with a variety of comedy routines, with each of them taking their comic turns, whether as call-or-response, or as one relegated to straight man. Bowering (see his piece celebrating Proper Tales Press here) is long known for his journal writing, some of which has been reworked into a variety of poetry, fiction and non-fiction works, but I am curious to know how much of this is lifted from those same journals, or lifted from his own recollections from the period, some fifty-plus years ago (the text does mention a journal he is writing in, but Bowering is known for his fictional shifts). Part of the pleasure of this short travelogue is the sharp wit and humour on display, something he and McFadden shared, as well as the homage to McFadden through the semi-fictional travelogue as well, a form McFadden explored extensively, from this trilogy of novels around the Great Lakes (A Trip Around Lake Ontario, A Trip Around Lake Erie and A Trip Around Lake Huron, a series he rewrote for Talonbooks’ eventual reissue Great Lakes Suite), as well as his more straightforward (comparatively) travel books: An Innocent in Ireland, An Innocent in Scotland, An Innocent in Newfoundland and An Innocent in Cuba (after his first volume, I had suggested he shift the title for the second volume, “A Scoundrel in Scotland,” but he wasn’t going for it; I mean, how long can one remain innocent, even ironically so?).

This is the sort of chapbook you will absolutely love or absolutely hate, depending on what you might think of Bowering’s sly reportage, involving puns, bad jokes and the occasional groan-inducing moment. I, myself, would be curious to see Bowering write further in this direction, reporting on his travels and adventures with other writers over the years. Just what else might those infamous journals of his actually hold?

We had left the dusty heckhole that is Thessalonika farther and farther behind. We had been welcomed into the dark cool air of Lake Koronia. Now for the first time in Greece I felt a little pleasant, so I was determined to entertain David, and to instruct him simultaneously. As we were still within stories Hellas, I told him the legend of the Three Fates of Greek lore: Athos, Mythos, Portugal and D’Artagnon
“I sense the approach, however, of the mysterious East,” said David, sticking his head out the Volkswagen’s window.
“Your senses do not waver in their loyalty to you,” I said.
“The scent of cinnamon and rose petals!”
“The fragrance of running sewers and rotting meat!”
“The thin, faint sound of little golden bells on a thousand dancing feet!”
“The equally faint but distinguishable report of oxen shit hitting the sunlit pavement!”
We were in our twenties, remember. It takes some time for subtlety to develop.