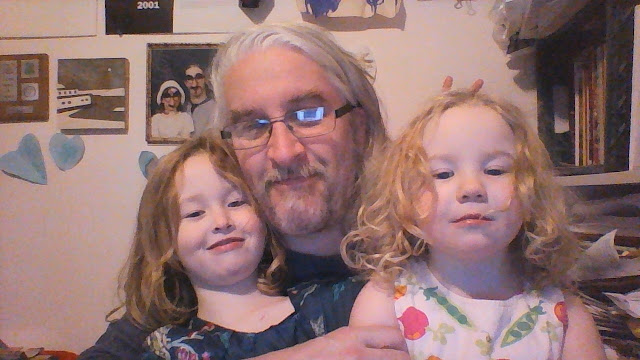 [what the children and I looked like, at least last week; as always, note the 1998 Bay Photo Studio glossy on my office wall, when eldest daughter Kate and I had professional photos done]

Normally (or at least, the past few years) I would post something referencing one of my mother’s relatives, a number of whom were involved in military service (her paternal uncle, her maternal grandfather and a number of his brothers-in-law, as well as his father-in-law), but the hard drive with all of those pictures and scans are inaccessible right now. You can see links to previous acknowledgments with some of these people here. Even without a new post, I remember them, still.

Kingston ON: I feel incredibly fortunate to be able to receive copies from publisher Maureen Scott Harris of the small chapbooks of lectures from Queen’s University’s Page Lecture. Originally founded by then-writer-in-residence Phil Hall, the annual series acknowledges the now-late Kingston poet and journalist Joanne Page, and Play and Work in the Work of Joanne Page by poet, editor and critic Don McKay (A Fieldnotes Chapbook, 2019) is the ninth lecture in this annual series, “delivered on October 23, 2018 in Watson Hall, Queen’s University, Kingston, Ontario [see my review of the prior publication here]. As Harris writes as part of her introduction, both to the publication and to the public lecture:

McKay’s poems and essays are about us and our complicated relationship with the larger living world we inhabit, the need to learn where and how we fit within it. What it means to be human, how to trim our sense of ourselves to an appropriate scale. He offers us moments of encounter and exchange, dizzying openings into larger understanding, and stunned celebration and grieving. Names and naming, making, birds, rocks and stones, engines, wonder, paradox are abundant in his thinking and writing. Have I mentioned his apt and antic acrobatics, clownish leaps and tumbles, the wonderful jokes that animate the poems? His wit is a corrective to the high seriousness of Romanticism and our enthrallment with the world as site and occasion for attending to our own sensations, emotions, and reactions. Let’s try to see the thing itself, he says. We might approach tree, bird, rock with courtesy, introduce ourselves to them, and listen for what or how they might speak back.

I find it interesting that throughout the lectures in this series, McKay took it upon himself to focus on the work of Joanne Page herself, she for whom the series was named [see my 2015 obituary for her here; my review of her third collection, Watermarks, here]. It seems to be an entirely McKay approach, as well, getting to the heart of what most others may have overlooked: a Joanne Page lecture actually on Joanne Page—and a delightful and playful essay, at that. As McKay writes towards the beginning of his lecture:

What possessed me to pursue this road scarcely ever taken? In part I was moved by a wish to emphasize the efficacy of poetry, through its capacity for redress, to use Seamus Heaney’s term. I knew that I would find no better vehicle to convey this point than the works of Joanne Page. This wish was partnered with another—perhaps its twin—to buck a current trend emphasizing poetry’s supposed uselessness. Joanne Page’s poetry, while frequently playful and even mischievous, does not aspire to what Heaney calls “the glissando of postmodernism.” It occupies, believes in, and exploits gravity, and perhaps nowhere more effectively than when it’s having fun. So, giving work the last word serves to underscore a point Joanne’s writing exemplifies: poetry matters.

This lecture series is always uniquely compelling. Now that they’re nearing a decade of lectures and subsequent publications, might there be a larger published collection of essays for a wider distribution and readership?

Windsor ON: The first title in the chapbook series “Writers at Rest: Authors on Their Pastimes & Hobbies” produced through Woodbridge Farm Books [see their “12 or 20 (small press) questions” interview here] is Kingston writer Diane Schoemperlen’s One Thing Leads To Another: On Collage (2017), a marvelous short essay on her ongoing work with collage, and the blending of visuals and text in both her artworks and writing. As she writes towards the beginning of the essay:

From the beginning of my writing career, my fascination with the intersection of the written word and visual images has persisted. My first book, Double Exposures, published in 1984, was a fictional story I wrote to accompany a series of forty-eight old family photographs. These were rescued from my ferocious mother, who had threatened to throw them away. From a photo of my father and his friend looking like cool gangsters in the forties, to one of my young and beautiful mother posing in a barnyard with one white chicken and a hoe, to a nudie shot of myself as a big-eyed baby on my stomach on a towel on the kitchen table, the photos appear on the verso (or left side) of each two-page spread, with the accompanying story on the recto (or right). They face each other but do not intersect or overlap. They interact without touching, separate but still creating connections and echoes in both directions. I did not realize it at the time, but this book was my first step on a long and winding exploration of the symbiotic relationship between text and image.

One thing leads to another. slowly.

Through fourteen trade books that include works of short fiction, novels and creative non-fiction, Schoemperlen has explored an interesting line between collage and creation, and writing and visuals, able to employ an intriguing array of strategies equally in both forms, and overlapping, blending and colliding the two when required, making her one of the most vibrant prose writers in the country. For some time now, as well [see my 2016 interview with Schoemperlen for Ploughshares here], I’ve considered her to be a rare small press author (in terms of vibrancy, language and experimentation) able to publish with larger, more mainstream presses, so it is fascinating to see her write on some of how she builds both writing and visual art, and the relationship she sees between the two. Further on in the same piece, she writes:

I am composing this essay one piece at a time, as if it were a collage. One thing leads to another – for reasons that aren’t always clear and don’t need to be. Decades ago, I read somewhere that asking a writer to explain how she did it is like asking a centipede how it manages to walk with all those legs. After being thus questioned, the centipede was never able to move again. The same could be said of making collage. I worry about this.

Please don’t ask me what it means. I might say I don’t know.

I begin a new collage with hope and curiosity, eager to embark on a spontaneous sequence of discovery. As a person who has always liked to have a goal, a plan, or, at the very least, a detailed to-do list, I find this exhilarating and liberating. I enjoy making collages so much that often it feels like a guilty pleasure.
Let’s face it. Sometimes writing is hard. Sometimes it makes me want to fling myself into the pit of despair. Gertrude Stein, in How to Write, said, “I return to sentences as a refreshment.” I would say the same about collage: I return to collage as a refreshment. Sometimes I return to collage as a relief. A collage has never kept me awake all the night. A collage has never made me want to bang my head against the wall. A collage has never ever made me want to tear my hair out. For this I am thankful. I have to admit I am rather fond of my hair.

Other works in the series, which connect to their ongoing writing retreats and residencies, include Dani Couture’s A River in a Drought Is Still a River: On Not Running and Alix Hawley’s Your Eye: On Photography.