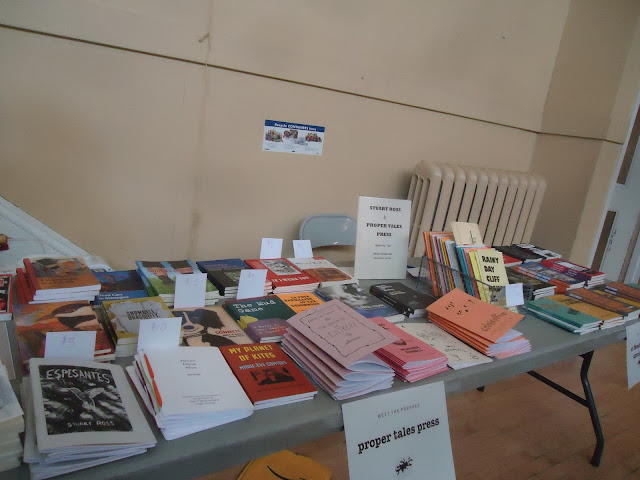 Okay, I clearly picked up too many items at this year’s Toronto’s Meet the Presses’ annual Indie Literary Market [see part six of my notes here; and my most recent post on what I gathered at the ottawa small press book fair]. Don’t tell Christine! I’m squirrelling items away all over our house.

Toronto ON: A further title from Gap Riot Press comes Toronto poet Andy Weaver’s latest, the chapbook HAECCEITY (2018), an extended poem that suggests it is part of a much longer work-in-progress. The piece is built, in part, as a collage, as Weaver writes at the end of the collection:

Many of the ideas, images, words, phrases, etc., throughout the poem have been borrowed, adapted, and carried forward from other works. The only type of text that I consciously tried to limit within the realm of usufruction was other poetry, though I freely allowed poetics and other writings by poets.

He does include a bibliography at the end, and it would be interesting to see further how individual lines and phrases emerged from such a list. Increasingly, over the space of three trade collections and multiple chapbooks, Weaver’s writing has explored experimental forms with a more formal language, akin to writing out Robert Duncan’s twists and shapes with Stephen Brockwell’s sentences. As his poem begins:

When I had journeyed half
of my life’s way, I found
I had lost sight of love, the path
that does not stray. The self
is obscure—even worse,
it inures us to a feeling
that our life is a rock slowly
chipped away by each day,
that we live as debtors withdrawing
hourly from a sum owned
by some other self to which
we owe an amount constantly
on the edge of being due.

Toronto ON: From Maureen Scott Harris' annual chapbook series of lectures comes Daphne Marlatt’s On the Threshold of the Page (A Fieldnotes Chapbook, 2018), the text of “The Sixth Annual Page Lecture delivered on October 24, 2017 in Watson Hall, Queen’s University, Kingston, Ontario,” with an introduction by Stan Dragland. I’m quite pleased that Harris has taken on the publication of these lectures, which so often might become ephemeral productions, slipped later into collections of the individual authors’ essays, if at all, without any sense of not only the immediacy of the event, but the acknowledgment of the series, which also include post-lecture chapbooks by Elizabeth Hay and Stan Dragland, among others. The annual lectures were actually founded by Phil Hall, who continues to curate such, during his tenure as writer-in-residence at Queen’s University, named for the late Kingston poet Joanne Page. As Marlatt’s lecture begins:

Would you give a talk on the page? This open invitation from Phil Hall immediately raised questions for me: whose page? mine or another’s or even other writers’ in the plural? Having spent much of the past year going through forty years of my own work with my editor Susan Holbrook for a collected poetry, Intertidal, the answer to that question seemed a given. But then a further question arose: as a poet, do I approach the page now as I used to twenty or thirty or even forty years ago? Is what was at stake then, at stake now, in writing a poem? I’ll try to answer such questions in this talk.